Published Sunday, May 15, 2022
by Silver Krieger/LaborPress 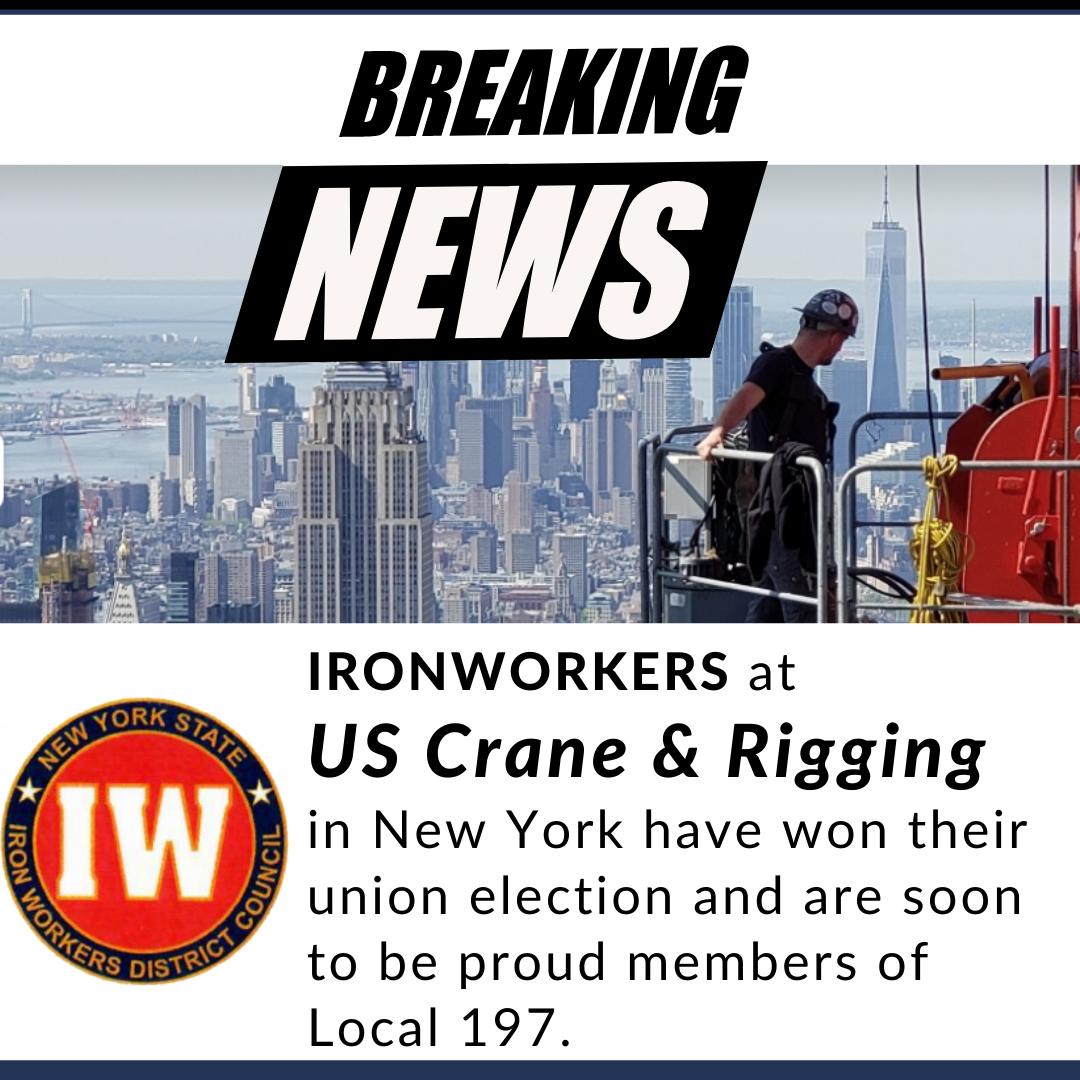 (NEW YORK CITY) - Workers employed by U.S. Crane and Rigging have voted by a 4-to-1 margin to join Ironworkers Local 197.

Labor Press spoke to New York State Ironworkers District Council Organizer Eddie Jorge to find out how the Workers triumphed over threats and intimidation to finalize the win: “We had elections in the past, (but) the supervisor (always) intimidates the Workers.  This time, was a little bit easier because it was not an in-your-face kind of election - this time, it was a mail-in ballot.  A lot of these guys worked for (U.S. Crane and Rigging) for years, but they were afraid.  They could vote at home and nobody’s looking over their shoulder at how they voted.  That was the only reason that they felt a little bit comfortable.  I talked to the Workers and told them, ‘you can vote however you want, nobody’s going to know.’ The first time, (the supervisor) was telling the Workers that they had to bring in the ballot so they could mail it for them.”

The National Labor Relations Board (NLRB) ordered this latest revote after the previous election ended in a tie with both the company and the Union each contesting an equal number of ballots.

Jorge says U.S. Crane and Rigging supervisors have a history of fear-mongering and preying on vulnerable Workers fearing deportation: “(The supervisor) told them they were going to be fired, he threatened them with deportation because a lot of them are Undocumented.  He has a history of intimidating Workers and the guys, they’re afraid of him.  He’ll keep them home for a couple of weeks and then get rid of them.”

Jorge has been able build up significant relationships with Undocumented Workers at U.S. Crane and Rigging over a number of years, which he was able to draw on ahead of last month’s successful Union vote.

“I said, look, we’re not looking to pull you out of U.S. Crane and Rigging,” Jorge explained. “We’re looking to organize the company because you guys are already working for U.S. Crane and Rigging.  You’ve got nothing to lose and everything to gain.  It was like they thought we were going to pull them out, so we could get our guys in to work.  I said no, we’re looking to organize the company.  I said the only way we’re going to be able to make change - if you want to make change - is you vote ‘yes.’  If you want to stay the same, you vote ‘no.’”

The Local 197 Organizer was also able to point to the ground-breaking Unionization Drives at Starbucks and Amazon for inspiration: “I said, you got Starbucks Workers trying to Unionize, you got Amazon Workers trying to Unionize - it’s up to you.  What do you want to do?  If you guys are tired of every week not getting paid and you want change, it’s up to you.”

Ricardo Rosario says he almost died while working for U.S. Crane and Rigging: “It was the night shift and the Crane Operator fell asleep.  It’s such a different way working for the Union.”

U.S. Crane and Rigging has a long track record of wage theft and safety violations.

Health care costs were also a big motivating factor for Workers to ultimately overcome their fear of Unionizing and vote with their pocketbook.

To Continue Reading This Labor News Report, Go To: www.laborpress.org/in-a-first-time-ever-win-ironworkers-successfully-organize-u-s-crane-and-rigging-workers-in-nyc/