Published Sunday, May 15, 2022
by Berry Craig Via Peopleâs World 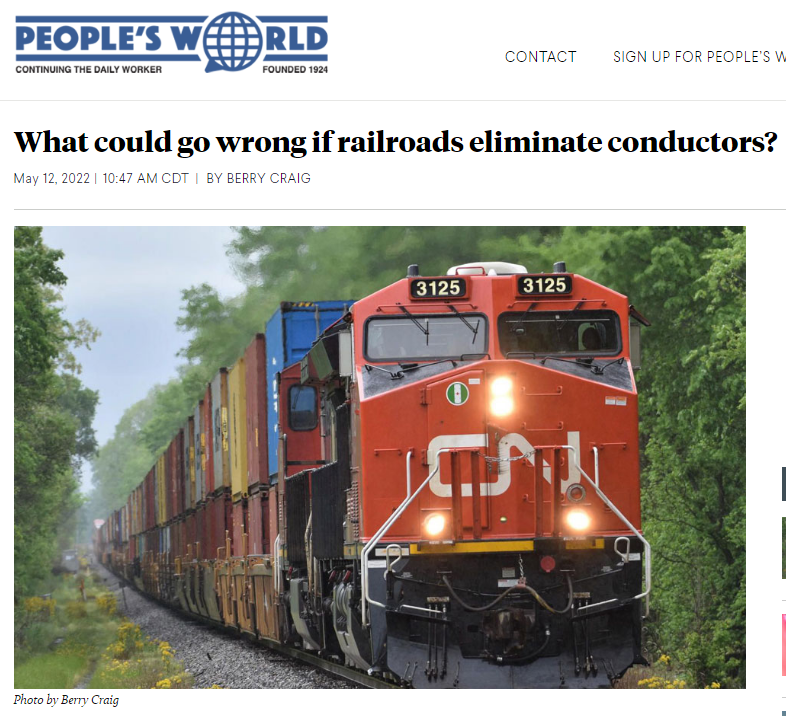 People’s World Editor’s Note: Life-long Kentuckian Berry Craig is an Emeritus Professor of History at West Kentucky Community and Technical College in Paducah and a Freelance Writer. He is a Member of American Federation of Teachers (AFT) Local 1360, Recording Secretary for the Western Kentucky AFL-CIO Area Council, Webmaster-Editor for the Kentucky State AFL-CIO, and a Member of the State AFL-CIO Executive Board.  His ninth book on the history of his state: Kentuckians and Pearl Harbor: Stories from the Day of Infamy, was published by the University Press of Kentucky in November 2020.

Imagine the public outcry if airline companies eliminated co-pilots as a first step toward a long-term goal of flying planes by remote control.

What could go wrong, right?

Well, railroad companies really do want to get rid of conductors, in effect, co-pilots, in freight trains.

If the rail industry has its way, only the Engineer, alone in the cab, will have to manage multiple locomotives that don’t just pull trains.

Sometimes, Engineers have to control locomotives that help stabilize trains from the middle of the cars and push from the rear.

These days, trains weigh up to 18,000 tons or more, stretch for up to three miles and hit speeds approaching 80 mph.

Ultimately, the companies hope to run trains by remote control.

What could go wrong, right?

The main motivator behind rail companies wanting to halve crews is, of course, boosting revenues, which, in turn, means fatter wallets for corporate execs and stockholders.

At least the railroad companies are consistent.

They have a long history of elevating profit over the safety and welfare of Rail Workers and the public they’re supposed to serve.

From the time the railroad industry rose in the 19th Century to the advent of Rail Unions soon after, railroad owners forced their Employees to work long hours at low pay in miserable conditions that threatened - and often cost them - their lives and limbs.

The result was the Great Railroad Strike of 1877, the first major Strike in American History.

The railroad companies convinced President Rutherford B. Hayes to send in Federal Troops to break the Strike.

Maybe I missed it, but plans to eliminate Conductors haven’t grabbed a lot of newspaper headlines or rated significant coverage on the TV news - yet.

But an organization called Fight for Two Person Crews: Safety Above Profits is trying to spread the word.

To Continue Reading This Labor Perspective, Go To: www.peoplesworld.org/article/what-could-go-wrong-if-railroads-eliminate-conductors/