Democrats âRegain Control Of Board Overseeingâ Labor Relations For Feds 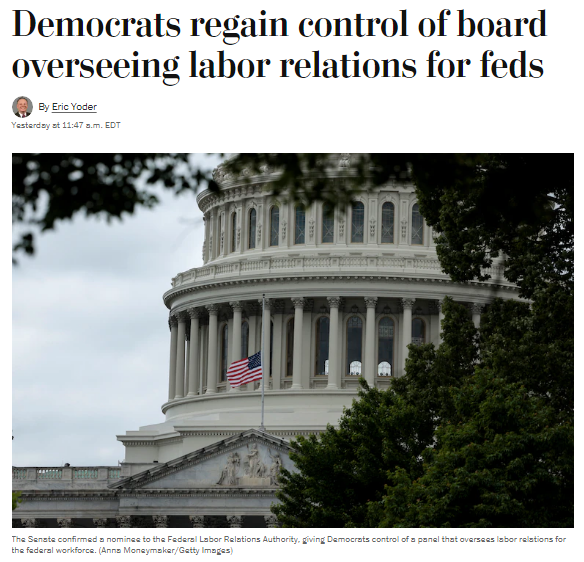 (WASHINGTON, D.C.) - Democrats now control a Board overseeing bargaining and other Labor Relations inside the Federal Government after the Senate confirmed a new member late last week - the vote on Susan Tsui Grundmann for a seat on the three-member Federal Labor Relations Authority (FLRA) has been a top priority for Federal Unions, which have been waiting for a Democratic majority to reverse a number of Trump-era decisions that they argue are overly restrictive.

Grundmann formerly held senior positions with several Unions and chaired a separate oversight agency for Federal Employees - the Merit Systems Protection Board, during the Obama Administration.

She will replace a Republican Member of the FLRA who has been serving as a holdover after the expiration of his term.

The FLRA is an independent agency that functions much like the National Labor Relations Board (NLRB) does for the Private Sector.

Unlike Union-represented Private-Sector Employees, Federal Employees do not have the right to Strike, and in general their Unions can’t negotiate over pay and benefits.

However, Civil Service Law does allow bargaining over “conditions of employment.”

Many disputes brought to the FLRA involve what that term covers or excludes.

That is playing out now in bargaining over Coronavirus Safety Protocols in the Federal Workplace and over which Federal Employees will be allowed to tele-work, and for how often, long-term.

Unions applauded Grundmann’s confirmation, which came on a 50-to-49 vote, with U.S. Senator Lisa Murkowski (Republican-Alaska) joining Democrats and one Democrat not voting.

“Over the past few years, the majority at the FLRA issued decisions and policy statements that routinely ignored legal precedents and sought to minimize Federal Employee voices in the Federal Workplace,” National Treasury Employees Union (NTEU) President Tony Reardon said.

Everett Kelley, the President of the American Federation of Government Employees (AFGE), said the confirmation will “restore dignity and fairness to this important administrative body.”

During the Trump Administration, the Board made a number of decisions in favor of management by issuing policy statements at the request of the Office of Personnel Management and other agencies.

For example, the FLRA raised the standard for requiring agencies to bargain over changes in working conditions during a Labor Contract.

It also limited management’s duty to bargain over other new issues in that time period.

In separate cases decided in late January and early February, a Federal Appeals Court overturned those actions, saying the agency had not justified a departure from its own long-standing practices.

Each of those policies had been issued on a 2-to-1 vote by the FLRA Board, with the two Republicans in favor and the Democrat dissenting.

The Democratic Member, Ernest DuBester, is now the Board’s Chairman, having been elevated to that role by President Joe Biden last year.

To Continue Reading This Labor News Report, Go To: www.washingtonpost.com/politics/2022/05/13/democrats-federal-unions-board-control/