National AFL-CIO President Shuler Reaches Out To Buffalo Labor In The Wake Of Racist Shooting At East Side Supermarket, Tells WNYALF That It âHas The Full Weight Of The AFL-CIOâ In Offering Its Support & Help 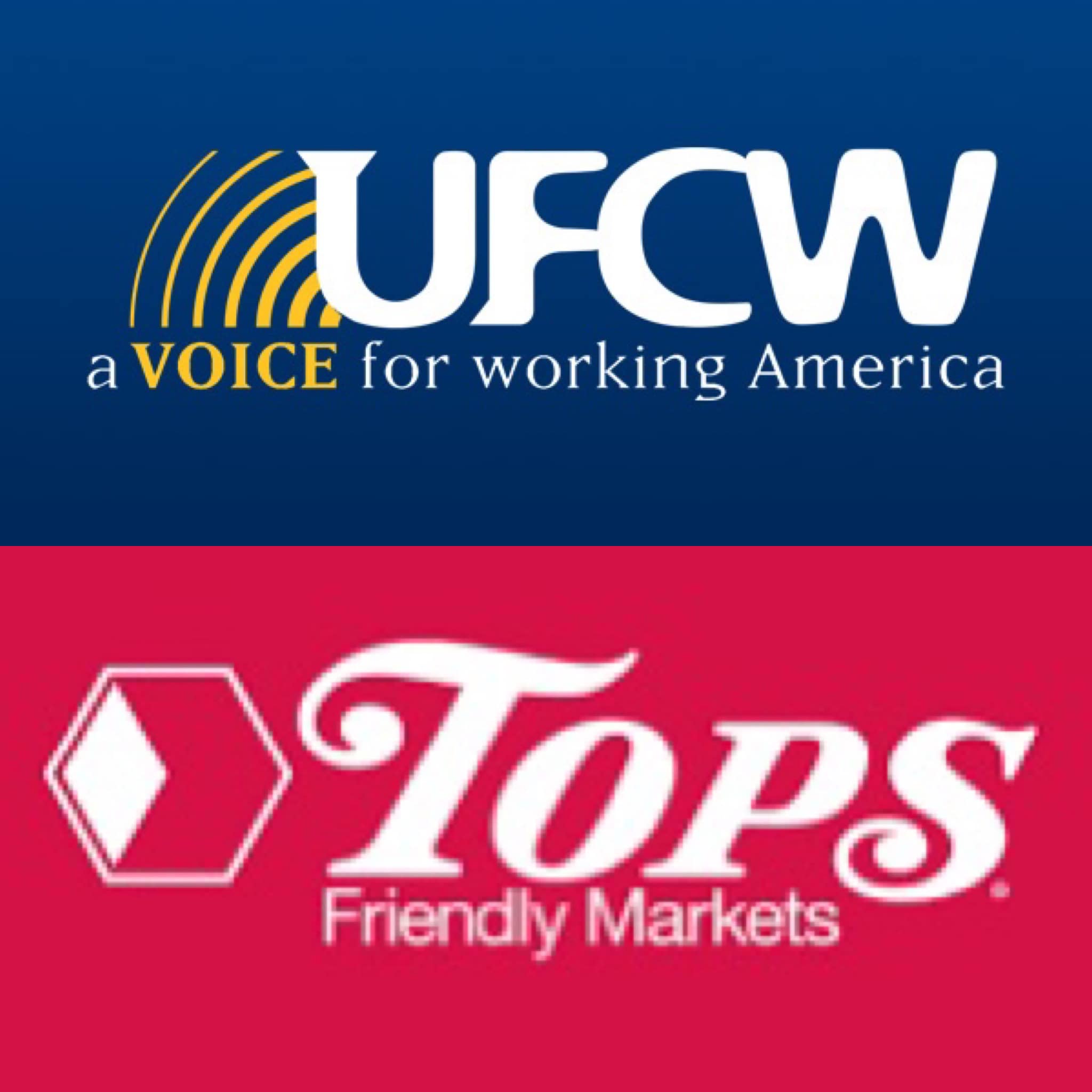 (BUFFALO, NEW YORK) – National AFL-CIO President Liz Shuler has reached out to the Western New York AFL-CIO Area Labor Federation (WNYALF) in the wake of what authorities said was a racist shooting that occurred at an predominately Black East Side Supermarket on Saturday (May 14th), telling WNYALF President Peter DeJesus that Organized Labor in Buffalo “has the full weight” of the National AFL-CIO in offering its support and help.

An 18-year-old gunman reportedly drove several hours from the Binghamton area to the Jefferson Avenue Tops Supermarket and - dressed in military garb with bullet-proof armor, proceeded to carry out a murder spree, killing 10 people and injuring three others before he was talked into surrendering by Buffalo Police.

WNYALF President DeJesus told WNYLaborToday.com on Sunday (May 15th) that he was told by United Food & Commercial Workers (UFCW) District Union Local One Western Area Director Mark Manna - whose Union represents Workers employed by Tops, that none had been killed in the shooting.

However, DeJesus said he was told by Manna that “some” had been injured.

No other details were immediately available.

Manna posted the following on his personal Facebook Page: Thank you to everyone that reached out to assist UFCW Members employed by Tops markets on Jefferson Ave today.  I spoke with many of the Workers today and they also appreciate all the support they are receiving from the community.  Our condolences go out to the victims of this senseless tragedy. 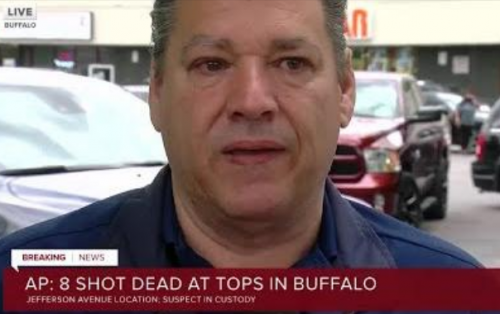 During an interview from outside the Tops Supermarket on Jefferson Avenue after Saturday’s shooting that was televised on WKBW-TV in Buffalo (https://www.youtube.com/watch?v=QgmzeLIE0Gc), a tearful Manna (pictured above) told a Reporter: “These are Essential Workers ‘who just want to serve their community and get a paycheck.’  Our President, Frank DeRiso, ‘wanted the Workers to know we are behind them and that we support them.’  This is a ‘dark day for every single Worker and things have got to change.’  (One UFCW-represented Tops Worker who was in the store during the shooting told Manna) that people ‘were running throughout the shooting.’  ‘It was (like) something out of a war movie.’  It appears (the shooter) ‘came here on a mission.’  As Union Representatives ‘we want to make sure we do everything for them’ (the Tops Workers).”

UFCW District Union Local One also posted the following on its Facebook Page: We are deeply saddened and outraged by the ruthless killings at the Tops store on Jefferson Avenue in Buffalo. This senseless attack, motivated by hate, was pure evil.  Our hearts go out to the innocent victims and their families.  We pray for our members at Tops that witnessed this horrific act of terror.  Our hearts are filled gratitude is expressed to the First Responders and to every single neighbor by the store that was impacted by this unimaginable tragedy.

“We are coordinating with the UFCW, as well as the National AFL-CIO and the New York State AFL-CIO,” DeJesus told WNYLaborToday.com.  “We’re ‘discussing a mass mobilization to let people they are not fighting this alone.’  ‘We want our Members to go home (safe and sound) every night and they must have that opportunity’ - ‘and we are working on their behalf.’  I’ve already spoken to many on my Executive Board ‘and they are all on board with this.’”

In regards to his discussion with National AFL-CIO President Shuler, DeJesus said: “She ‘reached out to me and told me we have the full weight’ of the National AFL-CIO ‘behind us.’  ‘She wanted to let us know that she was thinking about us in the wake of what happened and that (the National AFL-CIO) was ready and on hand for whatever support we needed.’”

The shooting in Buffalo ‘hurts,’” added DeJesus, who is of both African-American and Puerto Rican heritage.  “It is ‘gut-wrenching’ – ‘but we have been fighting racism and hate for a long time.’  While our community ‘might not be perfect, we do live in harmony’ (here in Buffalo).  But across our country, (some) ‘are becoming more emboldened because of what they see, read and watch on the Internet and on Social Media.’” 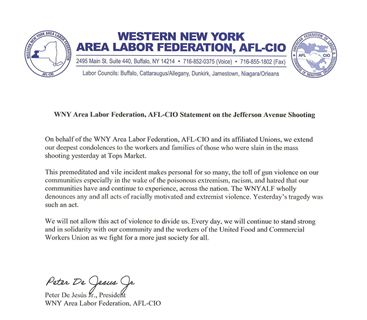