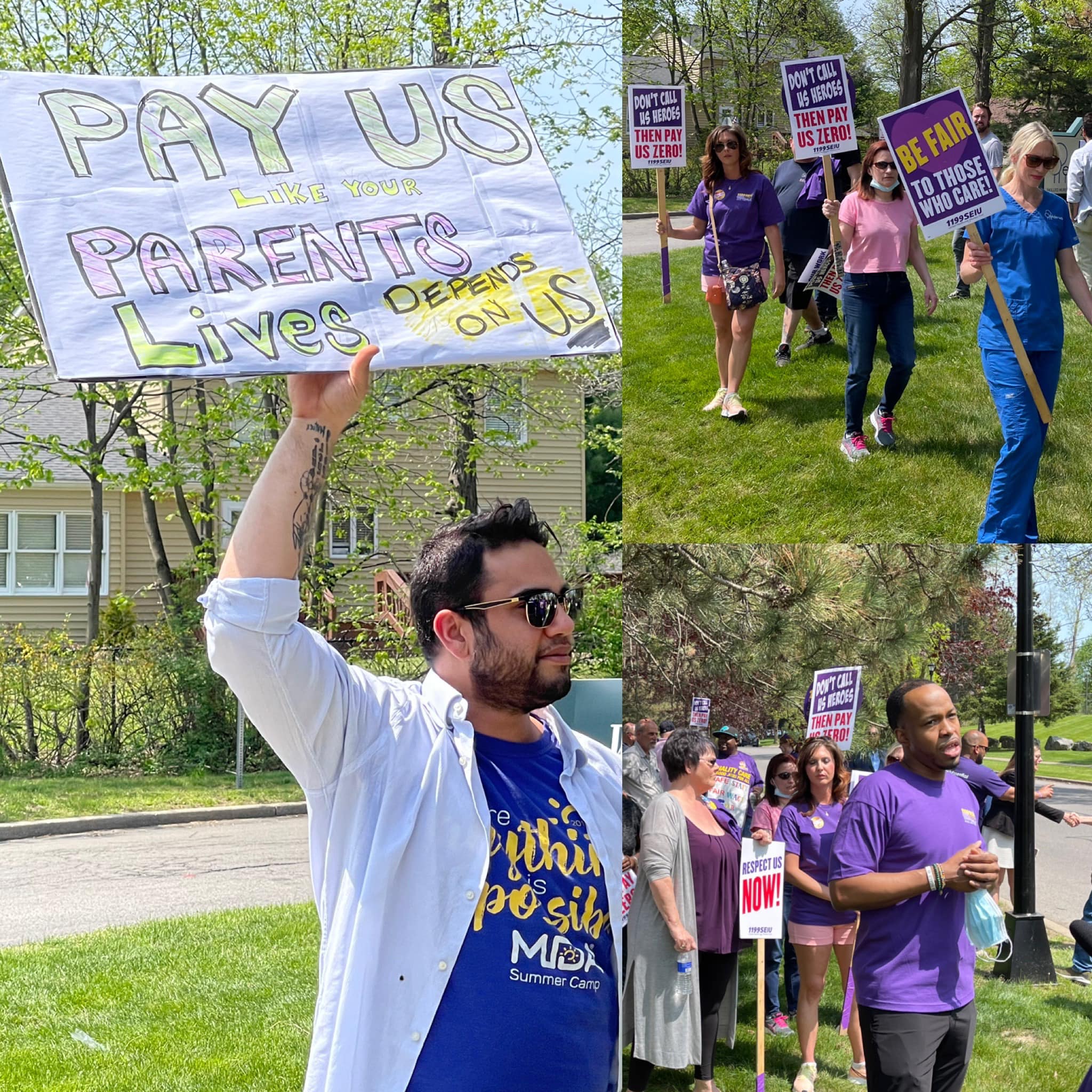 WNYLaborToday.com Editor’s Note: Pictured above, a collage of photos showing 1199 Service Employees International Union (SEIU)-United Healthcare Workers East-represented Caregivers, who are employed at the Elderwood Nursing Home in the Buffalo Suburb of Williamsville, as they conducted an informational picket on Thursday (May 12th).  The more than 70 Workers went public to demand better wages and staffing levels as they bargain a new contract.   (WNYLaborToday.com Photos)

(WILLIAMSVILLE, NEW YORK) – You hear it all the time these days, an array of Health Care Workers who risked their own health and lives, as well as the health of their families, going to work every day during the last two years of the COVID-19 Pandemic - hailed as Heroes for their yeoman work, but now seemingly forgotten by their employers who fail to live up to their side of the bargain when it comes to respect, fair pay, safe staffing and a safe workplace.

The latest story in this sad state of affairs is being focused on 70 Workers who are employed by the Elderwood Nursing Facility in the Buffalo Suburb of Williamsville, who held an informational picket on Thursday (May 12th) to voice their anger and frustration over the lack of a new contract that takes into consideration their hard work over the course of the pandemic and how it impacts the residents of the facility that they serve.

“You ‘just can’t call us Heroes.’  ‘You have to show it,’” James Funderburk (pictured below), an Environmental Services Worker (pictured below), said during an afternoon news conference.  “You ‘can’t push a contract proposal across the table and offer less than what the law calls for.’  ‘It’s a joke.’  ‘And we worry about being short-staffed.’  ‘Every’ position (inside Elderwood) ‘is important.’  ‘And if you’re a resident, you pay a lot to be here - so you’re meals should be hot when they show up and they should show up on time.’  ‘You need to make sure they have (good) living conditions.’” 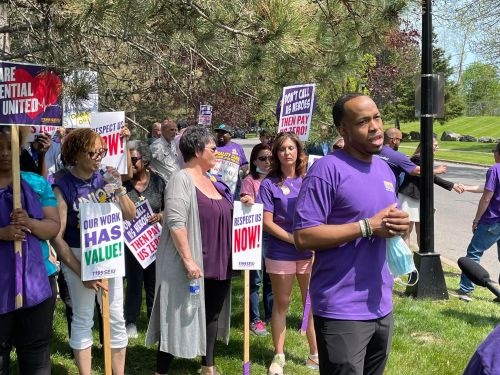 The 1199 SEIU-Represented Caregivers received support from several area Unions at the informational picket - including the United Auto Workers (UAW) and Starbucks United, as well as the Western New York AFL-CIO Area Labor Federation, whose President - Peter DeJesus, said: “You ‘all went out on a line and things have been bad.’  ‘We’re working to ensure you get the best’ (contract the Workers can get).  ‘You deserve what you have coming.’” 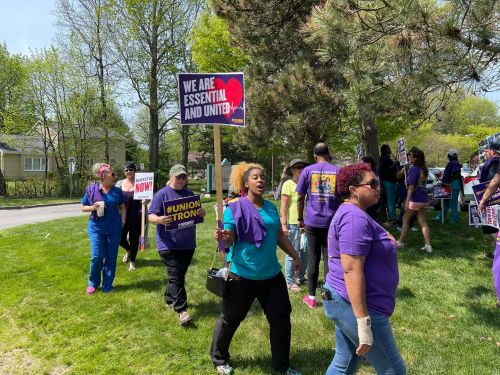 A number of Elected Officials were also in attendance, including Amherst Town Supervisor Brian Kulpa (Williamsville is part of the Town of Amherst), who told the Elderwood Workers: “You ‘represent the backbone of health care’ and the Town ‘stands behind you.’”

According to 1199 SEIU, Elderwood - which owns more than 50 Nursing Homes and Care Facilities across the States of New York, Vermont and Rhode Island, is refusing to pay its Staff a rate that is close to the area standards set at other nursing homes in the area.

Yet - in 2020, Elderwood reported more than $3.7 million dollars in related party or non-arms-length transactions - such as rent, real estate, administrative and pharmaceutical costs to companies that its owners are invested in, the Union says.

Between 2018 and 2020, Elderwood at Williamsville withdrew more than $3.5 million in equity, yet most of its Service Workers make much less than $15 per hour for the essential work they provide at the nursing home, Union Officials said. 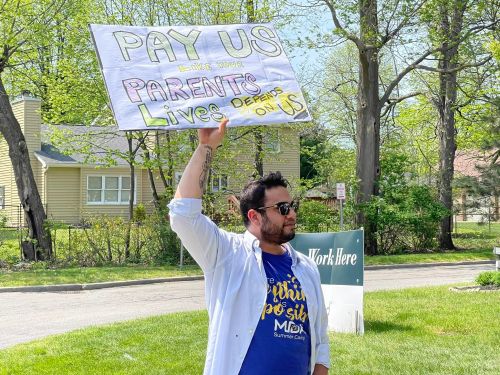 On another front, Elderwood’s Staffing crisis is not just a local problem.

At least six of the same 15 facilities have low Staffing Ratios, according to U.S. Centers for Medicare & Medicaid Services.

Workers at Elderwood’s Lockport Facility in nearby Niagara County also face the same struggle where the Employees say short staffing is also a problem.

“They are ‘multi-millionaires’ and (they) ‘don’t want to give us any money.’ (and its) the residents (who) ‘are the ones who are suffering,’” Elderwood LPN Marcie Livergood, who is employed at the Lockport facility.

The contract that covers more than 50 Workers at Elderwood/Lockport expired on December 31st (2021). 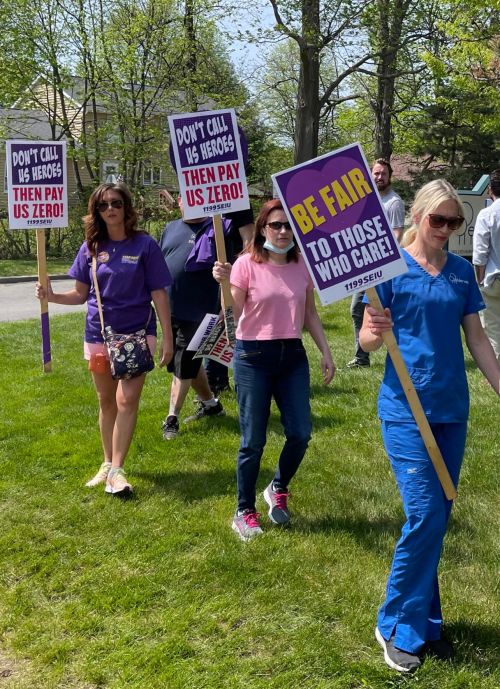 Recruitment and retention of Caregivers has put both sides at odds, but those 1199 SEIU-represented Caregivers say staffing levels are critical because of low wages.

“We are ‘short staffed and it’s terrible.’  ‘I’ve seen times when there is only one aide on an entire floor by themselves,’” Funderburk said.

“I’ve ‘never seen it like this and I’ve been here for nine years,’” LPN Lauren Hawkins said. “I’ve ‘never seen it this understaffed.’  There are ‘no regular Staff here because we aren’t paying enough money to the Employees that we have.’  They’ve left and ‘the building is filled with Agency’ Workers.   ‘They said they want to get regular Staff in here, but they aren’t offering enough money for new hires to come work here.’  ‘We need help.’”

For-profit Elderwood had made an attempt to add the nearby Weinberg Campus in Getzville to their portfolio when the company planned to purchase the Campus, but that deal fell through around the same time Union Workers at Weinberg won some of the highest wage rates in the area.

“(Elderwood) is ‘pulling millions (of dollars) out of Western New York that’s going into their own’ bank accounts.  (1199 SEIU) is bargaining more than a dozen (area nursing home contracts) right now and ‘this has to stop,’” Todd Hobler, who serves as Executive Vice-President of 1199 SEIU’s Upstate Division, told the assembled 1199 SEIUers, who broke out into the chant of “Enough is Enough” after he finished. 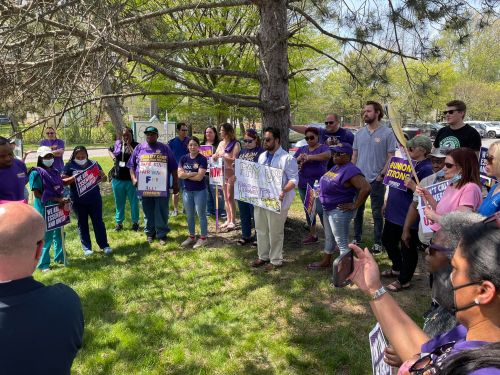 1199 SEIU United Healthcare Workers East - whose mission is to achieve quality care and good jobs for all, is the largest and fastest-growing Health Care Union in America, representing more than 400,000 Nurses and Caregivers throughout the States of New York, Massachusetts, New Jersey, Maryland and Florida, and in Washington, D.C.