Published Thursday, May 12, 2022
by Steve Wishnia/LaborPress 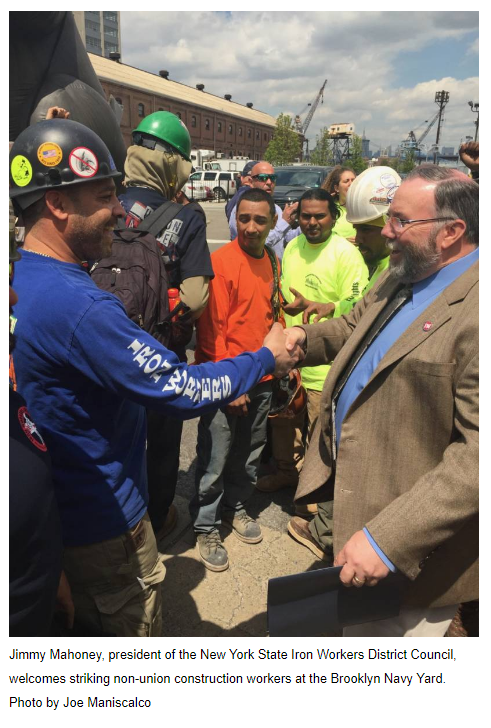 Several factors have aligned to make conditions favorable, says Mahoney, who has held the Labor Leadership for seven years now.

Politically, there’s a friendly administration in Washington, a Pro-Worker Secretary of Labor in Mary Walsh, and “it looks like the National Labor Relations Board is finally going to do their job,” he says.

Economically, “We have an advantage because there’s a shortage of Workers,” he said.

The Union has 12 schools across New York State that teach both skills and safety methods and procedures, so “we can provide a licensed, trained, and drug-tested workforce.”

The construction projects funded by the Federal Infrastructure Investment and Jobs Act enacted last year will bring “a massive amount of bridge repair and highway work” to New York, he noted - including the renovation of the Bruckner Expressway in the Bronx and the fixing of deteriorating bridges all over the State.

The Iron Workers have more than 10,000 members in New York State, in 15 Locals: Five in the New York City area; Three in Buffalo-Niagara Falls; and others in Rochester, Syracuse, Albany, Utica, Jamestown, Newburgh and the small Northern Town of Gouverneur.

Mahoney joined Local 580 in 1982, the Local for Ornamental and Architectural Ironworkers in the City, Long Island and Westchester County.

He rose to become a Foreman and Steward, and, after completing the two-year certificate program at Cornell University’s School of Industrial and Labor Relations, was elected Recording Secretary in 1993.

Mahoney moved up to the Statewide Union in 2009, when he was elected Treasurer of the New York State District Council.

He was also appointed Business Manager of Local 580 that year and was later elected for two more terms.

In 2015, he was appointed General Organizer of the International Association of Bridge, Structural, Ornamental and Reinforcing Iron Workers Union, and five months later, General President Eric Dean named him a General Vice President.

The Union plans to expand organizing in all facets of the industry in New York, Mahoney says, but particularly among Rebar Workers.

It definitely wants to reach Undocumented Immigrants, who make up a large share of Non-Union Building Trades Workers.

Particularly on smaller jobs, they and the Union usually find each other through word of mouth.

“We’ve had some success,” he says. “There is a language barrier, but we can accommodate that.”

The Union can’t bring in everyone who’s interested, he adds, but “we’re willing to listen.”

To Directly Access This Labor News Story, Go To: www.laborpress.org/ironworkers-james-mahoney-time-is-right-to-organize/