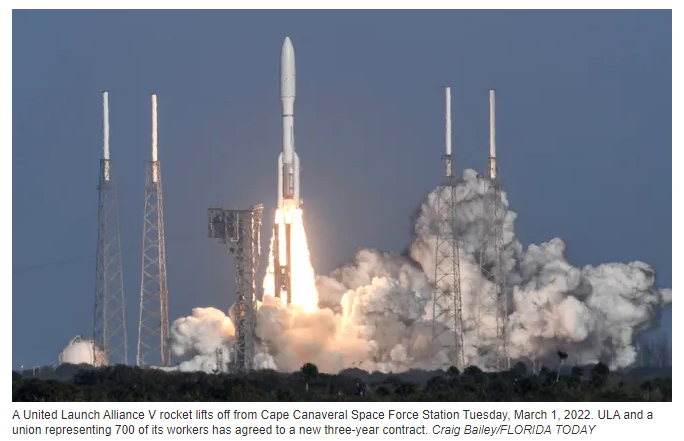 (CAPE CANAVERAL, FLORIDA) – The International Association of Machinists and Aerospace Workers (IAMAW) - which represent Employees at the United Launch Alliance (ULA) who build and launch its rockets, have reached a new contract agreement, avoiding a repeat of the Strike that marred the previous round of negotiations.

The three-year deal covers nearly 700 ULA Employees at Cape Canaveral Space Force Station in Florida, the Vandenberg Space Force Base in California and a ULA Manufacturing Facility in Alabama.

Covered Workers include those who build the rockets, work on launch teams and maintain the launch facilities.

“ULA Machinists are the hard-working Men and Women who ensure that America’s launch capability remains second to none by not only manufacturing but launching some of the best and safest rockets in the world,” IAMAW President Robert Martinez, Jr. said. “They deserve a contract that acknowledges the decades of skills and expertise they bring to the job.  I am proud to say that’s what we were able to bring home to the Membership by standing in solidarity and being prepared for the bargaining table.”

According to the Union, the agreement calls for wage increases, health care plan improvements, a ratification bonus, and 401(k) gains.

"We’re pleased that the IAM represented Employees have ratified this agreement that is so critical to continuing ULA's success," ULA President & CEO Tory Bruno said. "The represented employees' contributions have propelled ULA forward in delivering critical capabilities for our Nation and our customers.  The future is bright at ULA.  Our Employees build the best, most reliable rockets flying today and the missions we launch save lives, explore the universe, connect the world and help humankind unlock its potential in space."

The new contract avoids a repeat of a nearly two-week-long Strike by its Union Employees in 2018 during an impasse in contract negotiations.

ULA, a joint venture between Boeing and Lockheed Martin formed in 2006, builds and launches rockets from its Atlas V and Delta IV Heavy families.

The company is developing a new rocket, Vulcan, which is expected to make its maiden flight later this year.

"With the recent announcement of future Vulcan launches, we have a healthy launch backlog with more than seventy Vulcan launches on the manifest.  This three-year contract helps secure our place as the go-to provider for launching unique missions on extremely complex trajectories, as well as missions that will shape the future of the launch industry.  We’re excited and proud to work as a single and engaged team that is setting the standard for innovation and excellence in the space industry," he said.

To Directly Access This Labor News Report, Go To: www.floridatoday.com/story/tech/science/space/2022/05/03/launch-provider-ula-workers-agree-new-contract/9629372002/