âWith Less Than 3% Of Tradespeople Being Women,â A Nashville Building Trades Union âOffers A Five-Year Apprenticeship For Women To Learn Weldingâ

Published Thursday, May 12, 2022
by Claire Kopsky/WTVF-TV 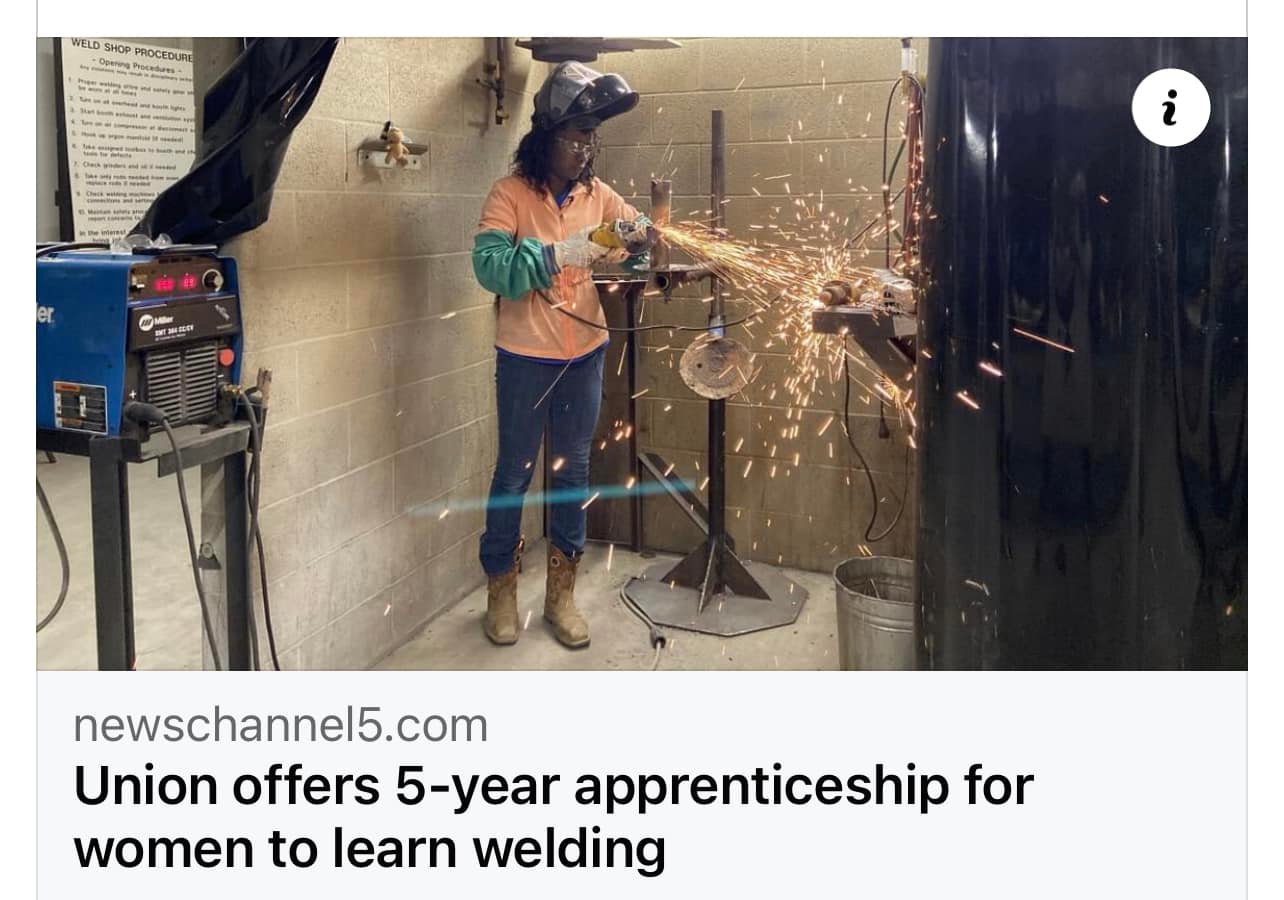 (NASHVILLE, TENNESSEE) - With less than 3% of Tradespeople being Women, a local Union is offering a five-year Apprenticeship Program - with full benefits, to entice more female applicants.

The Union, Tennessee State Pipe Trades Association (TSPTA), is one of 5,000 Pipefitters, Welders, Sprinkerfitters and Plumbers across the State.

Nashville-based Local 572 helped to build some of the largest economic development projects in the region - such as the National Football League Tennessee Titans' Nissan Stadium, the Facebook Data Center in Gallatin, the Spring Hill General Motors Plant, and most recently, the Nashville Sounds' GEODIS Park at the Fairgrounds.

But with just over 5% of Local 572's Apprentices being female, the organization has been pushing to hire more Women, saying "Women of the Union have made immeasurable differences on job sites."

The Apprenticeship Program offers participants health benefits, insurance, a pension, 45 college credits and most leave the program earning well over $100,000 in their first job.

Alexis Clark, who is set to graduate the program in 2023, said that just four years ago, she had no idea about this Trade.  Clark said once she started the program, she knew it was a good fit.

"I've worked underneath Pipefitters so I watched them. I wanted to weld, of course, so that was interesting," Clark explained. "It’s always something new, it’s a challenge."

Another Woman in the program, Elizabeth Cunningham, switched careers from being a Caregiver in a Nursing Home: "When I applied, I didn't know how to read a tape measure.  I didn't know the difference in a Phillips head and a flathead screwdriver.  Like, I just I didn't know anything about anything: plumbing, or welding or anything.  I told him that in my interview, but I had an eagerness to learn and I was willing to learn and I follow directions well. So, I got accepted, and they put me to work.  And I have not regretted it one day since."

Cunningham enjoys the work because she knows that "at the end of that job, you have put in the plumbing and that job that hundreds of people are going to use, you know, it's just rewarding to know that you did that.”

“And you feel a sense of accomplishment," she added.

In the male-dominated field Cunningham said her supervisors appreciate her attention to detail: "Being able to look at something and look at all the different ways that you can do something instead of just having your mind set on one way because a lot of people are set in their ways.  They do things the way that they were taught, but women get in there with a different outlook."

The Women completing the Tennessee State Pipe Trades Association Apprenticeship Program are hopeful other Women will not be intimidated by the male-dominated industry - and, instead, join them.

"To me, being a Woman in this, I feel like, even though I am a very feminine Woman, I feel like, you know, I don't have to be in everybody's box. You know?  I don't have to do the same thing as every other Woman.  I could be myself.  And I just feel like it gives you more of a push to accomplish more," Clark said.

To Continue Reading This Apprenticeship And Training Labor News Story, Go To: www.newschannel5.com/news/union-offers-5-year-apprenticeship-for-women-to-learn-welding