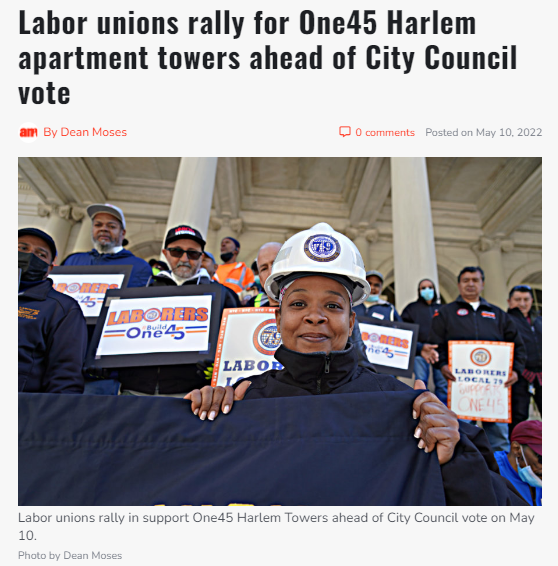 (NEW YORK CITY) - Labor Unions took to the steps of City Hall Tuesday morning (May 10th) to support the construction of embattled Harlem Towers just before a City Council committee vote.  Unions 32BJ Service Employees International Union (SEIU) and Laborers Local 79 defended the project known as One45, a duo of 363-foot-tall towers planned to be built on West 145th Street and Lenox Avenue.

While Harlem locals have raised concern about the skyscrapers, worrying that they could be the harbingers of gentrification, Union Leaders believe that the plans pose a great opportunity for community investment and growth.

“After good talks with the developer, we have come to see how many opportunities are being dealt within this project,” 32BJ SEIU Political Organizer Marissa Williams said. “This is exactly the type of project that we need in our city.  It is a development that will ensure good building service jobs, but also be a development that will include high quality workforce housing, senior housing and market rate.”

According to the groups, the towers would accommodate members of the workforce at affordable pricing.

This is something they say the city is lacking in.

The Unions cite households are headed by one or two Union Members who cannot qualify for typical Mandatory Inclusionary Housing and often cannot afford market-rate rents.

With One45, supporters believe they will be able to live where they work.

Crowding on the steps leading to City Hall, 32BJ and Local 79 Members chanted for their cause and even set up a poster depicting the new buildings.

Tristan, a member of the development team, said at the rally that their plan is based on dialogue with local stakeholders, city agencies and Elected Officials that addresses the desires of the community by bringing 915 new homes for various income levels.

Additionally, the team boasts that the hub will include a brand-new headquarters for the National Action Network (NAN).

While at the rally Williams said her Union represents more than 85,000 Members across New York with 32BJ and that SEIU is fighting to ensure affordable housing is created so that their Members can live and work in their community: “So often we hear from our Members that despite their good Union jobs they need to move outside of the city to find a place that they can afford to live and raise their families.”

To Read This Labor News Report In Its Entirety, Go To: www.amny.com/news/labor-unions-rally-for-one45-apartment-towers-ahead-of-city-council-vote/