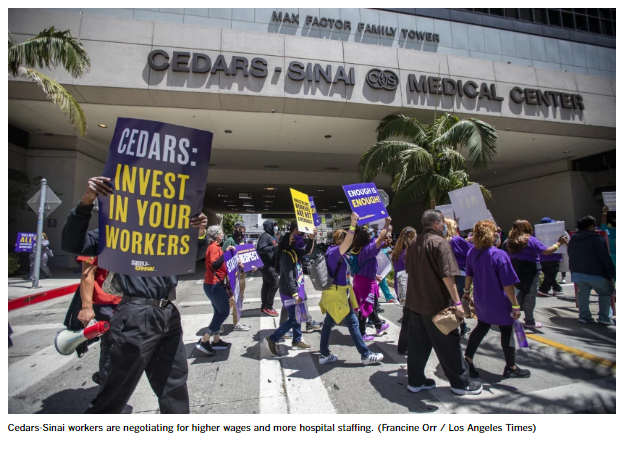 (LOS ANGELES, CALIFORNIA) - Nearly a thousand Workers at Cedars-Sinai Medical Center started a week-long strike on Monday (May 9th) for the first time in decades, demanding higher pay and better working conditions amid negotiations for a new contract.

The next round of negotiation is set to take place this week.

SEIU-UHW Spokesperson Renée Saldaña said Workers had demanded an 8% wage hike during the first year of the new contract, followed by a 6% hike in the two subsequent years, to beat record inflation in the U.S.

This is the first Workers’ Strike at Cedars-Sinai since 1979, Saldaña said, and the first one called by the SEIU-UHW.

The Union represents about 14% of Cedars-Sinai’s 14,000 Employees - mainly those who work in maintenance, service and clinical support.

SEIU-UHW said it gave management a 10-day notice before going on Strike, which is scheduled to end at 7 p.m. on Friday (May 13th).

Cedars-Sinai has said that the Medical Center will remain open and fully operational during the Strike and that Nurses, Physicians and Researchers are not part of the Union.

Health Care Workers at other Southern California facilities, including Kaiser Permanente and USC Norris Comprehensive Cancer Center, have protested what they say are low wages and dangerous work conditions amid a two-year pandemic that has raised the daily risk and stress that Hospital Workers face on the job.

Now, inflation and soaring prices are hitting households and adding to the pressure.

“I’ve made a lot of sacrifices right from Day One when my unit got converted into a COVID Ward,” said 61-year-old Yudis Cruz, a Clinical Partner at Cedars-Sinai.

Cruz said she has seen Co-Workers pass away and Co-Workers lose loved ones whom they infected with COVID-19.

“My own son got infected by COVID working at the hospital,” Cruz said. “We deserve respect, recognition and fair wages to keep up with the high cost of living today.”

The Union and hospital management have not reached agreement on a wage hike formula.

Each side accuses the other of not bargaining in good faith.

Tom Parker, a Communications Specialist for the SEIU-UHW, said the Union had demanded a more than a 40% hike in the minimum wage level, applying only to Workers in the lowest rung, to $25 per hour from about $17 per hour.

The Union said in a statement last month that the hospital’s workers had asked their employer to stop committing Unfair Labor Practices and to bargain in good faith.

To Read This Labor News Report In Its Entirety, Go To: www.latimes.com/business/story/2022-05-09/cedars-sinai-workers-strike-over-wages-conditions