âA Great Day Of Union Giving!â - The National Association Of Letter Carriers-Led 30th Annual Stamp Out Hunger Food Drive âIs Back After A Two-Year Hiatusâ Due To The Coronavirus Pandemic, Takes Place This Saturday, May 14th 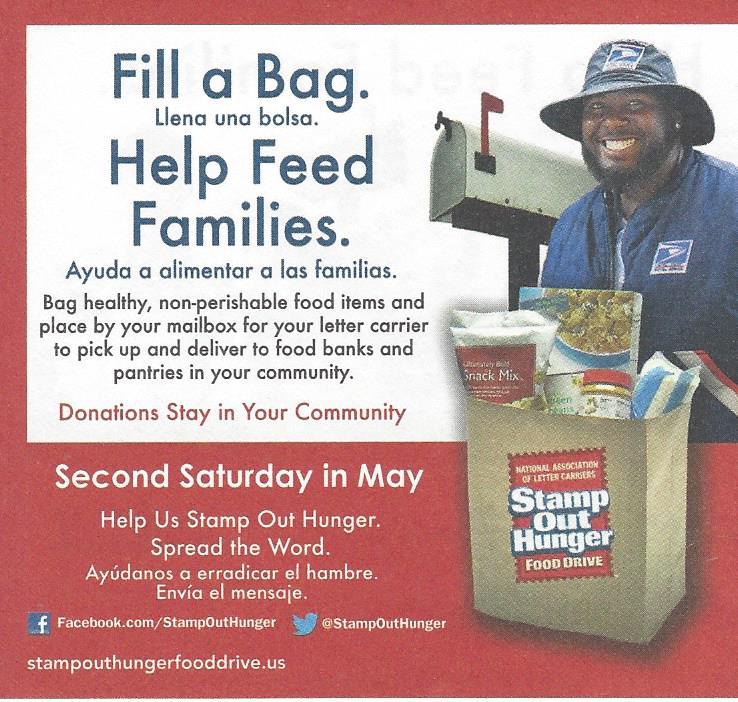 (ACROSS WESTERN NEW YORK) – This Saturday (May 14th), the National Association of Letter Carriers (NALC)-led Stamp Out Hunger Food Drive - the Nation’s largest one-day campaign to collect food for distribution to needy families, is back for the 30th time.

The Stamp Out Hunger Food Drive - which returns this year after a two-year hiatus because of the Coronavirus Pandemic, provides residents with an easy way to donate food to those in need.

They can simply leave their donation of non-perishable food items next to their mailbox and NALC-represented Letter Carriers collect them on as they deliver mail along their postal routes.

Each year on the second Saturday in May, Letter Carriers across the United States collect non-perishable food donations from their communities - which has grown to well over 1.8 billion pounds of food.

In the 30 years since it began, the food drive has collected about 1.82 billion pounds of food for struggling residents, nationally. 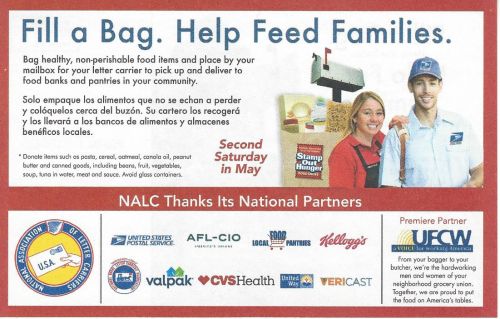 According to NALC Stamp Out Hunger Coordinator Sallie Moore, the food drive relies on its Local and Rural Letter Carriers to carry out the event.

“We couldn’t do this without all the Letter Carriers who spend extra time that day to collecting food, in addition to delivering and collecting.  We do it because we know it helps local families who are in need,” Moore said.

For example, the 2018 Stamp Out Hunger Food Drive resulted the collection of 71.6 million pounds of food from local communities in all 50 states, the District of Columbia, Puerto Rico, Guam and the U.S. Virgin Islands.

“Food deserts” in cities, plus homelessness and urban and rural poverty, combined to produce a National Hunger Rate of 11.8% in 2017 - the last year for which data are available, the U.S. Department of Agriculture’s Economic Research Service (ERS) reports.

That’s 15 million households where people were hungry all or part of the year. 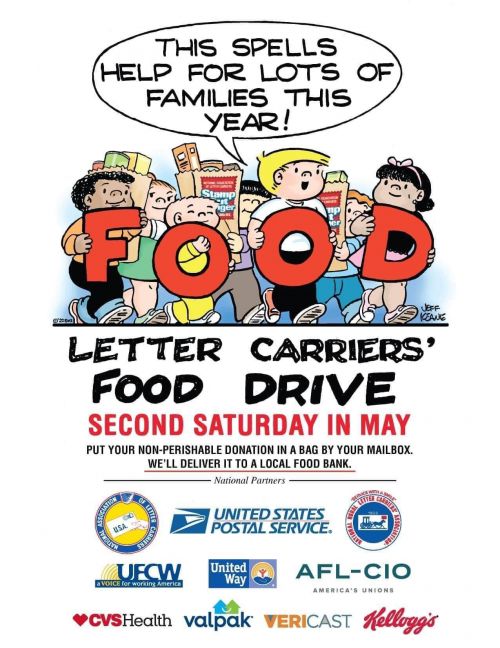 Food collected during the drive will be delivered to local community churches, food banks and food pantries for distribution.

While all non-perishable donations are welcome, donated foods that are high in protein - such as canned tuna, salmon, beans and peanut butter - are most needed.

Here in Western New York, it’s expected as many as 1,200 NALC Branch 3-represented Letter Carriers - from Niagara County down to the New York-Pennsylvania State Line - and several hundred volunteers will collect and deliver the donated non-perishable food items from across the region.

The National AFL-CIO, other Postal Unions, the United Food & Commercial Workers (UFCW) and several private enterprises are NALC’s partners in the Stamp Out Hunger Campaign.