Carpenters âClass Of All Women Is Building Walls, Breaking Barriersâ

Published Tuesday, May 10, 2022
by Amanda Vinicky/WTTW.com 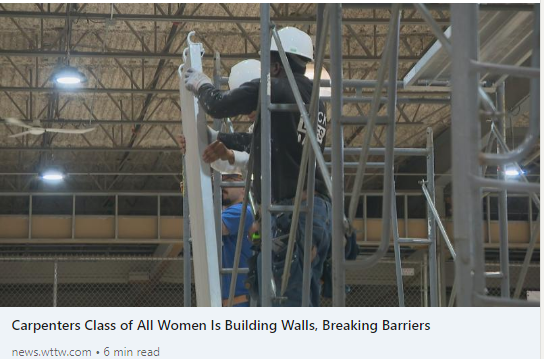 It wasn’t all that long ago when the biggest construction project Sheila Jones had taken on was putting together an IKEA closet for her daughter.

“And that took a long, long time and then looking back I’m like there are so many things I did wrong with it, which I’m now going to go back and fix,” she said.

Jones also wants to fix the ramshackle steps of her back porch and she now has the tools to do it.

She’s part of what Chicago Women in Trades says is the Regional Unions’ first class of all Women in 140 years.

Eight weeks into their nine-week program, Jones and her peers have learned to erect scaffolds and to maneuver aerial lifts.

It’s all part of the Mid-America Carpenters Regional Council’s Pre-Apprentice Program that will put Jones on the path to becoming a Union-Card-Holding Carpenter.

At age 36, it’s a huge career switch for Jones.

“I was actually working as a Nursing Home Case Manager for chronically mentally ill patients, residents.  And that was during the height of COVID.  And it just become too overwhelming.  I have two kids at home, so when their schools closed I just it couldn’t do it anymore, it just became just way too much,” Jones said.

As a Journeyman - make that JourneyWoman - she stands to make more - plus a pension and health care.

Classmate Caiti Maloney said she too took a circuitous route to get here, working stints as a Camera Operator and a realtor.

“I’ve had a ton of jobs, I worked at a restaurant at one point, I worked at a Toys R Us in New York City.  It’s been an adventure, but I’ve always really enjoyed being hands on and getting a chance to put things together and to really feel like there was a result to the work that I was doing,” Maloney said.

After soul searching, she nailed down what she wants to do: Be a Carpenter.

Maloney says as a kid, she would build things with her Grandpa and Dad.

“With my Mom and my Grandmother, they wouldn’t have had an opportunity to go into these types of fields even if they were interested,” she said. “So, I know I’ve talked to my Mom before and she said when she was in school her choices were to be a Secretary or to be a Nurse.  So she became a Nurse.”

According to a 2020 report from the Illinois Department of Labor, there still aren’t a lot of Women in the Trades.

In 2020, Women made up 4% of those in Trade Apprenticeship Programs, but programs like this could change that.

To Continue Reading This Apprenticeship And Training Labor News Story, Go To: https://news.wttw.com/2022/05/05/carpenters-class-all-women-building-walls-breaking-barriers