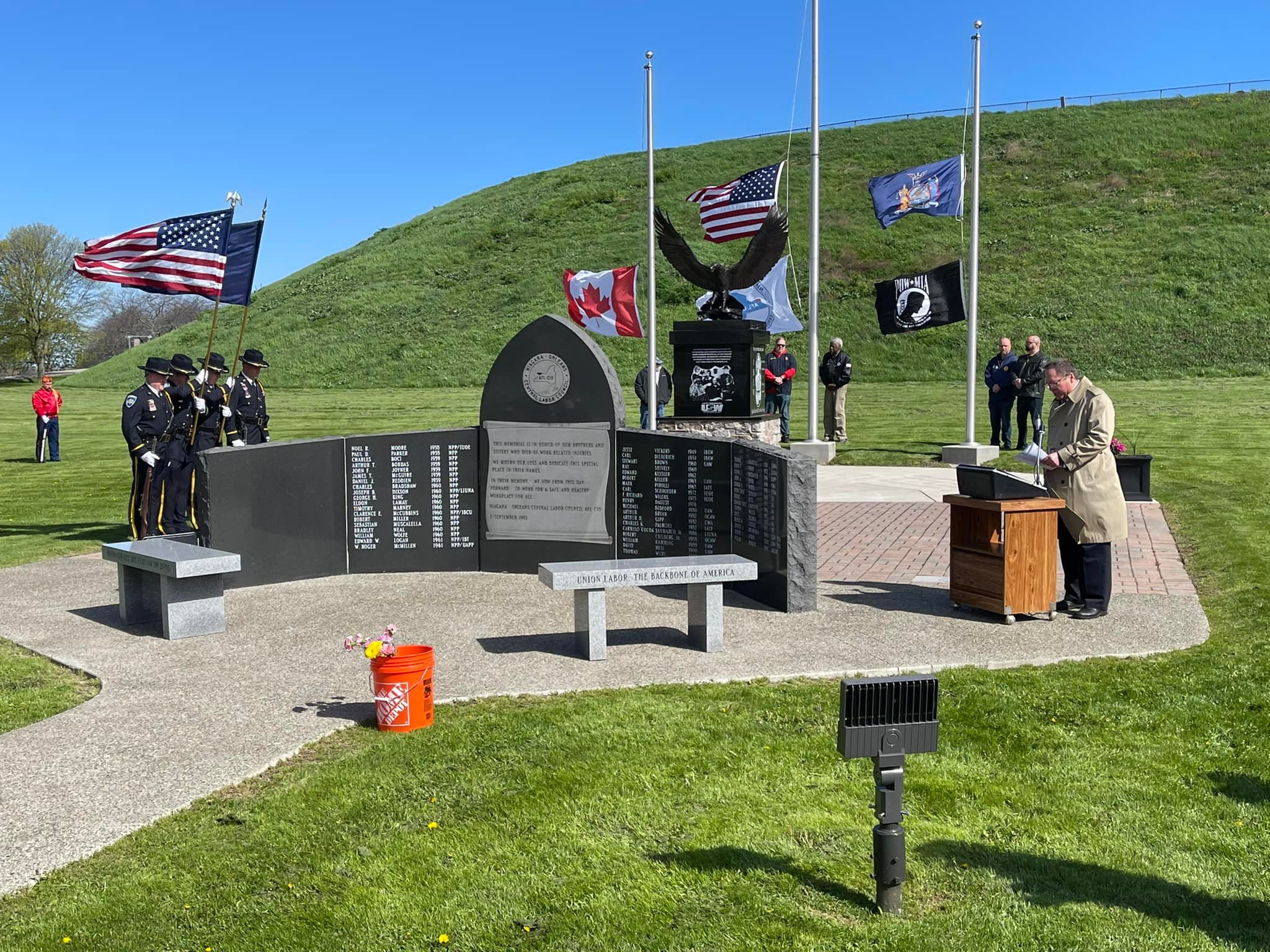 WNYLaborToday.com Editor’s Note: Pictured above, the Niagara-Orleans AFL-CIO Central Labor Council held its 31st Annual Workers’ Memorial Observation over the weekend in Reservoir Park in Niagara Falls to honor those who’ve died on the job and to recognize and fight for those Workers who’ve been injured or are battling the repercussions of an array of occupational diseases.  (WNYLaborToday.com Photos)

(NIAGARA FALLS, NEW YORK) – The 31st Annual Workers’ Memorial Observation that was held by the Niagara-Orleans AFL-CIO Central Labor Council over the weekend in Niagara Falls was different than in years past when Labor Council President Jim Briggs became visibly upset, angry and frustrated while telling those in attendance about a Worker he recently spoke to who had been dealing with a great amount of pain and was getting no satisfaction from the Workers’ Compensation System.

“He told he me he’d put a gun in his mouth (and contemplated pulling the trigger) because he couldn’t take (the pain) anymore,” said Briggs (pictured below at the podium), his voice rising as he spoke each word – which were intently listened to by a number of New York State and Federally-Elected Representatives who were sitting in the crowd. 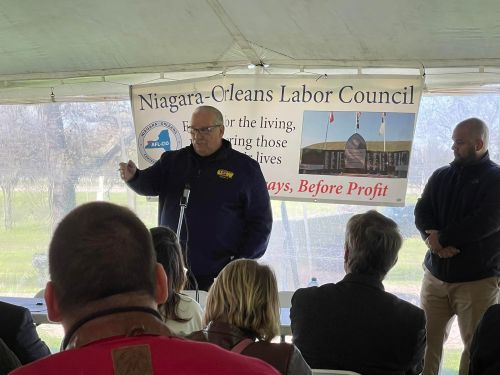 “We ‘face a problem here in New York State, the Workers’ Compensation System not being a benefit to Workers, but to employers.’  ‘It’s allowed the employer to direct the direction of the system.’  ‘It’s time for us to turn it around so it’s quick and efficient, because it is failing us’ (the injured Worker and the Labor Movement).  Doctors ‘won’t take these cases anymore because the State is (160) days out on making payments, so they just quit it.’  I’m calling on New York State ‘to work with us (Organized Labor) to create a Workers’ Compensation Roundtable to fix the problems.’  ‘We want this effort to be Labor-driven and we want reform as soon as possible,” said Briggs, who also serves as United Steelworkers (USW) District 4 Sub-Director.

The serious ultimatum highlighted the overall event, which is held each year to remember the dead and fight like hell for the living, as Mother Jones so eloquently put it so many years ago.

The bright, sunny morning ceremony that battled a biting, chilly wind could not deter those Labor Council Representatives from taking the needed time to remember those who’ve died and whose names are now etched in a beautiful monument in a sculpted area that also features an extremely large bronze eagle - its wings outstretched as to hold them near.

USW International Secretary-Treasurer John Sinn (pictured below, in the middle, with Niagara-Orleans Labor Council President Jim Briggs on his left and Western New York AFL-CIO Labor Federation President Peter DeJesus on his right), a featured speaker inside a large white tent that stood strong as it was continually battered by the high winds, silenced those who sat in their seats when he began: “This ‘day is a sad day’ - there were (5,333 Worker) deaths in 2019, ‘that’s fifteen a day - one every ninety-nine minutes.’  And occupational diseases?  ‘Well over (100,000 died) in 2019.’  ‘That’s why we make sure we have a day of remembrance.’” 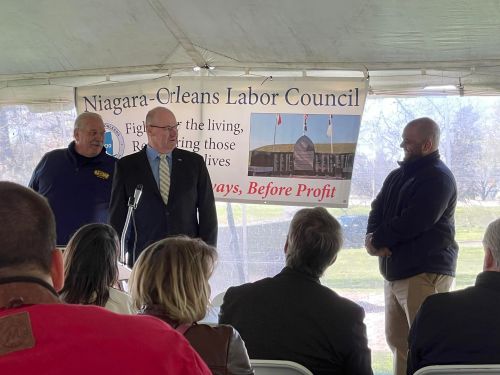 “More importantly,” Shinn continued, “(this) is a day ‘to recommit ourselves to keep our workplaces safe.’  All of this (the statistics of death and sickness, as well as the toll the Coronavirus Pandemic has taken on our Essential Workers) ‘should make us pretty angry.’  We also know what asbestos, silica and dust ‘is doing to our Workers.’  OSHA (the U.S. Occupational Safety & Health Administration) ‘is tremendously underfunded.’  There are (75,000 workplaces in the United States) ‘and less than one-percent’ are inspected.  ‘It would take (131) years to inspect them all.’  Congress ‘has got to do the right thing and fund this agency’ (for more Inspectors).  ‘We also need to increase the cost of penalties to employers, (most notably) willful violations - those employers who are killing people.’  ‘That’s got to stop.’  ‘It’s unconscionable.’  ‘We need to make our voices heard.’  ‘We’ve had to challenge our (USW) employers to (provide) safe workplaces due to COVID.’  ‘They have an obligation to make their workplaces as safe as possible.’  I know (Organized Labor’s) efforts (overall) ‘has saved tens of thousands of lives.’  And, ‘we don’t make enough in our’ country - PPE (Personal Protection Equipment) and drugs.  ‘We have to do better.’  ‘We have to bring back jobs and make things here.’  And ‘thank God for the Labor Movement that has helped people survive this pandemic.’  ‘Let’s do everything in our power because of our Members, who work where they live.’”

Western New York AFL-CIO Area Labor Federation (WNYALF) President Peter DeJesus, a former USW Member himself, also spoke: “We ‘still have a way to go’ (in order to protect Workers on the job).  ‘Work has to be done (during the pandemic), but we still are not providing our Essential Workers with the respect and pay they deserve.’  ‘We need to refocus our efforts on their physical and mental well-being (too).’”

During the outdoor portion of the ceremony that was held at the Labor Council’s Workers’ Memorial itself, Bill Jakobi - the United Way of Greater Niagara Labor Liaison who served as Master of Ceremonies, told those who huddled together: “Our work ‘is not done.’  ‘We stand united for Workers’ rights and the right to have a safe workplace, for the saving of lives.’”

There are a total of 52 names of Workers who went to work in the morning and did not come home at night to their loved ones that adorn the Niagara-Orleans Labor Council’s monument.

In addition, a number of inscribed pavers are laid into the ground around it. 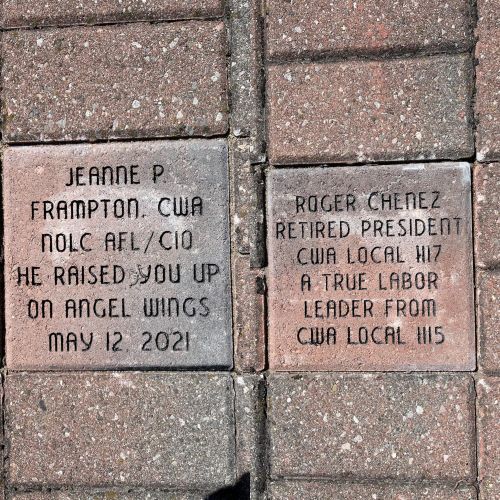 “Jean was married to Earl for more than sixty years and was involved in so many community groups, including the United Way.  ‘She will be sadly missed,’” Jakobi said.

“Roger was a ‘true’ Labor Leader,” he said of Chenez.  “He was ‘greatly involved’ in the Council’s political action efforts and was one of the ‘Gang of Thirteen” who helped bring this beautiful monument to fruition.  ‘He too will be sadly missed.’”