Published Sunday, May 8, 2022
by SB Workers United & The Huffington Post 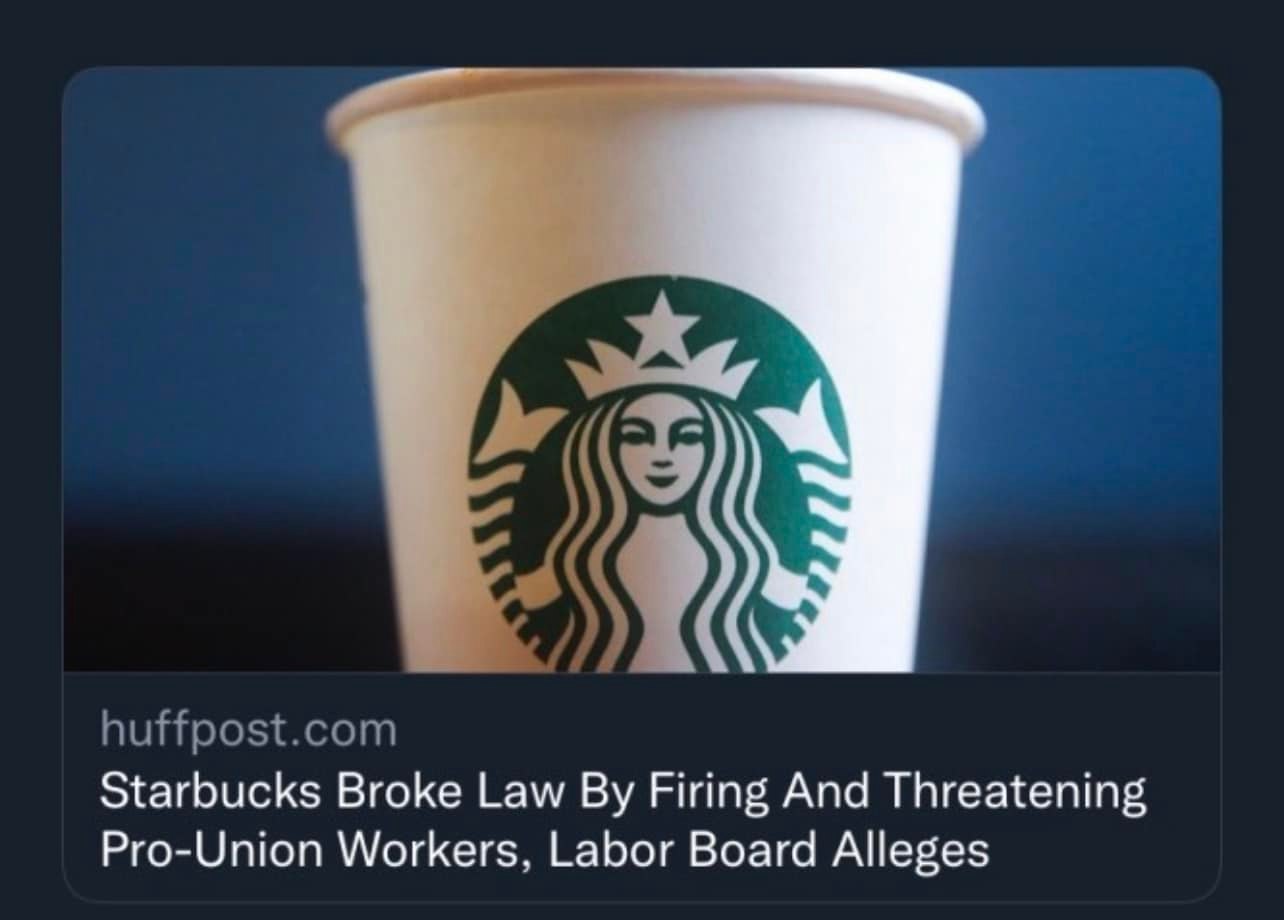 (BUFFALO, NEW YORK) – The Regional Director of the National Labor Relations Board (NLRB) Region 3, based in Buffalo, has issued a sweeping complaint against Starbucks - which encompasses hundreds of Federal Labor Law violations that occurred in Western New York alone, including retaliatory terminations, shuttering of Pro-Union stores, unlawful threats and oppressive surveillance and intimidation tactics.

This is one of the largest cases in NLRB history and confirms what Starbucks Partners have been reporting from the front lines for months - Starbucks President of North America Rossann Williams led an army of managers – including 103 listed in the complaint - from around the country to Buffalo to spy, threaten and interfere with Workers’ Union Organizing activity.

In a major victory for the victims of Starbucks’ worst retaliation, the NLRB Regional Office has demanded full reinstatement and back pay for six Workers who were unlawfully terminated for their organizing efforts - Angel Krempa, Minwoo Park, Cassie Fleischer, Danny Rojas, Brian Nuzzo, Kellen Montanye and Nathan Tarnowski.

“Starbucks is finally being held accountable for the Union-Busting rampage they went on,” said Danny Rojas, a fired Shift Supervisor at one of the Buffalo area stores.

“It is disappointing Starbucks has refused to work with their Partners and instead chose to fire Union Leaders like myself.  Today, the NLRB is validating that the psychological warfare and intimidation tactics that took place in Starbucks stores was unacceptable.  Starbucks needs to understand that it is morally corrupt to retaliate against Union Leaders and I am looking forward to the NLRB forcing Starbucks to make this moment right,” Rojas said.

Starbucks has been saying that no Union Busting ever occurred in Buffalo.

However, the NLRB sets the record straight, the Starbucks Union said.

The complaint confirms the extent and depravity of Starbucks’ conduct in Western New York for the better part of a year, they added.

In addition, the Union said: Starbucks will be held accountable for the Union-Busting minefield they forced Workers to walk through in fighting for their right to organize.  This complaint fully unmasks Starbucks’ facade as a progressive company and exposes the truth of (CEO) Howard Schultz’s Anti-Union War.

For More On This Organizing Labor News Story, Go To: www.huffpost.com/entry/starbucks-firings-threats-store-closures-labor-board_n_6275802ce4b009a811c39513