Published Sunday, May 8, 2022
by Bob Hennelly/LaborPress 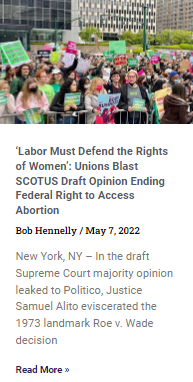 (NEW YORK CITY) - In the draft Supreme Court majority opinion that was leaked to Politico, Justice Samuel Alito eviscerated the 1973 landmark Roe v. Wade decision, as well as the 1992 Planned Parenthood v. Casey that reaffirmed a Woman’s access to abortion was protected by the U.S. Constitution.  Across the country, Pro-Choice Activists turned out to protest the opinion that called for the overturning of Roe v. Wade.

The formal overturning of Roe v. Wade, which could come in the next few months, has been long anticipated - but long-time Court observers were struck by the strident tone of the proposed opinion which reportedly has the support of Justices Clarence Thomas, Neil Gorsuch, Brett Kavanaugh and Amy Coney Barrett.

“We hold that Roe and Casey must be overruled,” wrote Justice Samuel Alito in the leaked draft of the majority opinion. “It is time to heed the Constitution and return the issue of abortion to the people’s elected representatives.”

“In the ninety-eight-page opinion, the Court ignores the significant impact of its ruling on Women’s lives and health,” wrote Kathryn Kolbert, an Attorney who argued Casey before the Supreme Court, in The Philadelphia Inquirer.  “By removing Federal Constitutional protection for Women, states will now be free to ban all abortions at any stage of pregnancy, and at least twenty-five states will do so.  Many states already have enacted laws that are ready to take effect with the demise of Roe and Casey.”

Kolbert continued: “The sheer number of women and families affected is staggering.  According to the Guttmacher Institute, (58%) of U.S. Women of reproductive age - or 40 million - live in states that are ‘hostile’ to abortion.  Hundreds of thousands of them will be unable to legally obtain abortions where they live.  As a result, Women will have to travel hundreds of miles or risk prosecution for obtaining abortion pills.”

National AFL-CIO President Liz Shuler tweeted: “Access to health care without fear and intimidation is every person’s right.  We must be able to control our own bodies - which has a direct impact on economic justice and the ability of Working People to make a better life for themselves and their families.”

In a statement, Association of Flight Attendants (AFA)-Communications Workers of America (CWA) President Sara Nelson blasted the draft opinion as “not just a radical assault on our rights and settled law, it is an attack against the majority of this country and the ideals upon which it was founded.”

“The Constitutional right affirmed by the court in 1973 to safe access and the legal right to an abortion was transformational for Women’s rights and our jobs,” Nelson wrote.  “Cabin Crew fought executives who exploited our sexuality and pushed gender inequality to undermine the dignity of our work and push the value of our labor into their own pockets.  We organized to define our careers, keep our personal choices as our own and lift up our role in saving lives as Aviation’s First Responders.”

Nelson continued: “In the earliest days of commercial aviation, we were allowed few choices in the workplace.  Every part of our bodies and our lives were dictated by management.  Airlines only hired White, Single, Childless Women under age (32) who met specific height, weight, and male-defined appearance standards.  Even if you met those ‘standards,” getting pregnant, having a baby, choosing to marry or gaining a few pounds meant giving up your job and handing in your wings.  Our first demands as a Union were seniority-based scheduling, to stop managers from using schedules to coerce us to choose between sexual exploitation and earning a living.”

CWA Local 1180 President Gloria Middleton, whose Union represents 9,000 City Administrative Managers, said: “I was on the generation when I knew the Women who were fighting for legalized abortion because my mother told me of stories of what used to happen in backrooms when people would use (coat) hangars to commit abortions and many Women died because they did not get the proper care.  Whether you believe in abortion or not, we believe at a woman must be able to have a choice of what she should do with her body.”

Middleton predicted the rolling back of abortion protections would energize women voters across the country to go to the polls in the upcoming and bi-annual Congressional elections, where voter participation usually drops off.

In a statement, United Federation of Teachers (UFT) President Michael Mulgrew wrote:  “We are outraged at the Supreme Court’s apparent decision to overturn precedence on Women’s Constitutional right to health care, privacy and safe abortion.  Our history as a Union Members reminds us that every right and benefit is hard fought and only maintained through continued struggle.  The Constitutional right to privacy regarding reproductive health is in peril.  If our highest court takes that right away, we must fight for legislation to guarantee it.”

To Continue Reading This Labor News Report, Go To: www.laborpress.org/labor-must-defend-the-rights-of-women-unions-blast-scotus-draft-opinion-ending-federal-right-to-access-abortion/