Published Sunday, May 8, 2022
by Mack DeGeurin/Gizmodo.com 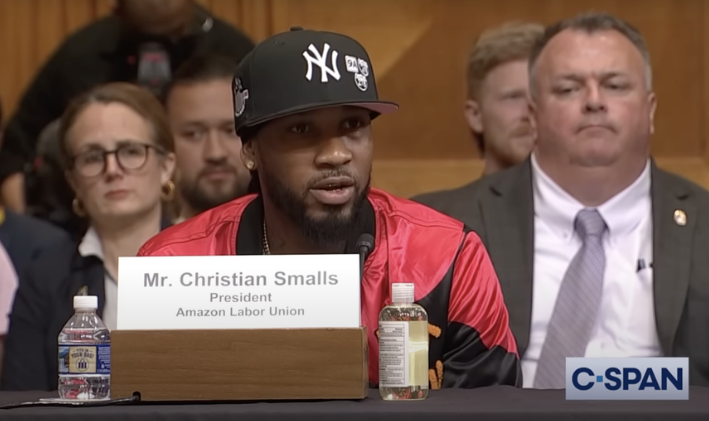 (WASHINGTON, D.C.) - Amazon Labor Union President Chris Smalls had some choice words for South Carolina Senator Lindsey Graham during a Congressional hearing last week: “The people are the ones that make these corporations go, not the other way around.”

Smalls made the comments during a Senate Budget Committee hearing called by Vermont Senator Bernie Sanders to question the U.S. Government’s spending on contracts with companies accused of labor violations, with a particular focus on Amazon.

During the hearing, Graham lashed out at Sanders, who he called “radical” for what he viewed as the “demonization of individual companies.”

“This is very dangerous,” Graham said of Sanders’ singling out of Amazon.

“You can have oversight hearings all you like, but you’ve determined Amazon is a ‘piece of crap’ company.  That’s your political bias,” Graham said.

Smalls, who was scheduled to testify at the hearing, fired back at Graham ahead of his prepared remarks: “You forgot that the people are the ones who make these companies operate.  If we’re not protected and if the process for when we hold these companies accountable is not working for us - that’s the reason why I’m here.”

The groups and some lawmakers spoke critically of Amazon, with Sanders calling out Amazon’s well-publicized Anti-Union tactics.

In the weeks leading up to the Staten Island vote, Amazon Workers told The City they attended Anti-Union meetings they believed were mandatory.

More recently, public documents revealed Amazon considered spending up to $100,000 per month on Anti-Union Consultants to kill that Union Drive.

Those are just the most recent examples in a long, sometimes aggressive, list of Anti-Union tactics displayed by the company.

Not long after the Senate hearing, Smalls reportedly met with President Joe Biden.

Though it’s unclear exactly what the two discussed during their meeting, Smalls posted a tweet, writing: “Just met with the President lol he said I got him in trouble.”

That meeting came just one day after Smalls and other Labor Leaders sat down with Vice President Kamala Harris.

The series of high-profile meetings represent a major win for Smalls and the Labor Movement generally, particularly among those working for large Tech Companies.

At the time of writing, at least three Apple Retail Stores are reportedly in the process of attempting a Unionization Vote.

Union efforts are also catching wind at Amazon as well.

Less than one month after Smalls’ victory a second warehouse in Staten Island attempted and failed to Unionize.

While that effort may have fallen short, it signaled what may be a year full of Unionization efforts spread across Amazon’s estimated 110 U.S. Fulfillment Centers.

Now, it appears these Workers have the public support of President Biden and leading members of Congress.

To Directly Access This Labor News Story, Go To: https://gizmodo.com/amazon-labor-union-leader-puts-lindsey-graham-in-his-pl-1848887996