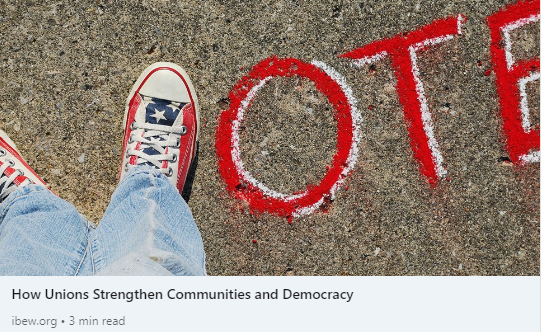 (WASHINGTON, D.C.) - According to a new report from the Economic Policy Institute (EPI), Unions aren’t just good for their Members and their paychecks - they’re also good for communities as a whole, and even for Democracy itself.

“Unions promote economic equality and build Worker Power, helping Workers to win increases in pay, better benefits and safer working conditions, but the benefits of Unions extend far beyond the workplace,” said Asha Banerjee, an Economic Analyst at EPI and Co-Author of the report. “The data suggest that Unions also give Workers a voice in shaping their communities and political representation.”

The study documents the correlation between higher levels of Unionization and a range of economic, personal and Democratic well-being measures.

“In the same way Unions give Workers a voice at work, with a direct impact on wages and working conditions, the data suggest that unions also give Workers a voice in shaping their communities.  Where Workers have this power, States have more equitable economic structures, social structures and Democracies,” the Authors wrote.

In terms of income and economic protections, the authors found the 17 U.S. States with the highest Union Densities have minimum wages that are on average 19% higher than the national average and 40% higher than those in low-Union-Density States.

They also have median annual incomes that are $6,000 higher than the national average.

Regarding health and personal well-being outcomes, States with the highest Union Densities have an uninsured (those without health insurance) population that’s 4.5 percentage points lower than that of low-Union-Density States.

More than 70% of low-Union-Density States passed at least one Voter Suppression Law between 2011 and 2019.

“Through long-standing advocacy and work to protect the right to vote, Unions have linked Voting Rights to Workers’ Rights,” said Margaret Poydock, Policy Analyst and Government Affairs Specialist at EPI and Co-Author of the report. “Unions play a key role in mobilizing Workers to vote, helping to determine which political leaders are elected and what occupational backgrounds they come from.”

“We found people who get a raise because the minimum wage goes up become slightly more likely to vote in the next election,” said Ariel White, an Associate Professor in MIT’s Department of Political Science and Co-Author of a paper on the findings. “Those people, who are low-income, (become) represented a little better in elections than they typically are, because people with low incomes tend to vote less.”

The EPI Authors noted that the relationship between high Union Density and higher household incomes, access to health care and paid leave, and fewer voting restrictions also highlights the importance of passing the Protecting the Right to Organize (PRO) Act.

The Bill, considered the most significant Labor Law reform in decades, includes a number of measures that would make it significantly easier to organize.

It has the support of President Joe Biden and passed the House of Representatives last year, but has stalled in the Senate.

“This study proves what Union Members have long known, that a stronger workforce translates into more Worker Power, and that’s good for everyone, Union or not,” IBEW International President Lonnie Stephenson said.

“It’s yet another reason to get the PRO Act on President Biden’s desk,” he said.

To Directly Access This Labor News Report, Go To: www.ibew.org/media-center/Articles/22Daily/2204/220426_Strengthen