Published Thursday, May 5, 2022
by Bob Hennelly/LaborPress 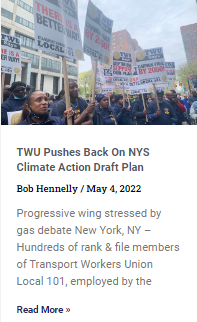 The packed hearing on the campus of the New York City College of Technology was the seventh in series of hearings that have been scheduled to get comment on the CAC’s proposals.

The CAC was established back in 2019 with Albany’s passage of the Climate Leadership and Community Protection Act, which committed the State to reduce Greenhouse Gas Emissions by 40% across the economy by 2030 and “no less than 85% by 2050 from 1990 levels.”

The draft plan calls for a dramatic shift away from the burning of fossil fuels, which have been linked to the warming of the earth’s atmosphere and catastrophic climate change.

Before the hearing, the TWU contingent was joined by other Unions that oppose a draft action plan generated by the CAC, which they say would compel New Yorkers to switch from natural gas stoves to electric - as well as ban new residential gas line hookups by 2027.

The CAC proposal would also ban fossil fuel vehicles by 2035.

The controversial draft plan is a divisive issue within the Democratic Party’s Progressive Wing, which includes both committed Labor Activists and Environmentalists that now find themselves on opposite sides of the debate over how New York State can best to get to a zero emission economy without displacing Workers.

TWU Local 101 President Constance Bradley told the large crowd outside the hearing that climate change was one of “the biggest threats we face today,” but that a commitment to lower emissions needed to be support by Labor Unions that “want to be part of the solution.”

Thousands of additional National Grid Workers are also based in Staten Island, as well as Long Island, and are represented by International Brotherhood of Electrical Workers (IBEW) Local 3 and IBEW Local 1049.

“This draft plan would be a job killing disaster and also will zap residents and homeowners with sky-high energy costs,” Bradley, told her Members who all work for the Utility in Brooklyn and Queens. “It would wipe out thousands of good Union jobs that enable Blue Collar Families to put food on the table, pay the rent and send their kids to college. There is a better way.”

According to an information sheet put out by the Union, the draft CAC plan calls for no new natural gas service to existing buildings, starting in 2024 - as well as no new gas appliances permitted, starting in 2030.

“That means if you need to replace your natural gas furnace, stove, water heater and washer-dryer, you will have to buy electric appliances and upgrade your electrical system to handle the greater load,” according to the Union’s analysis.

The TWU contends National Grid has a plan to rely on what they call a “common-sense” approach that relies on “renewable natural gas, which is captured from landfills, farms, and waste-water facilities, and green hydrogen, produced by solar and wind farms.”

“It’s now or never time for New York Democrats,” said TWU International President John Samuelsen. “Are you going to be the party protecting the economic security of Workers as we transition to a greener world or are you the party of environmental elites?”

Now with the New York Communities for Change as its Director of the Non-Profit’s Climate and Inequality Campaign, Sikora said during a phone interview: “This idea that National Grid is pushing is garbage.  National Grid is a gas only Utility that is attempting to strangle our future for its own profit.  It uses a variety of misleading propaganda talking points that sound technical, but are nonsensical.  But the idea of renewable natural gas is a like a doubling down of propaganda.  Natural gas itself is not natural.  It’s not a thing.”

On May 3rd, New York State Governor Kathy Hochul announced the appointment of New York State AFL-CIO President Mario Cilento as the newest member of the state’s Climate Action Council, making good on her previous commitment to appoint a representative of Organized Labor to the panel.

To Continue Reading This Labor News Report, Go To: www.laborpress.org/twu-pushes-back-on-nys-climate-action-draft-plan/