Published Thursday, May 5, 2022
by David Shepardson/Reuters 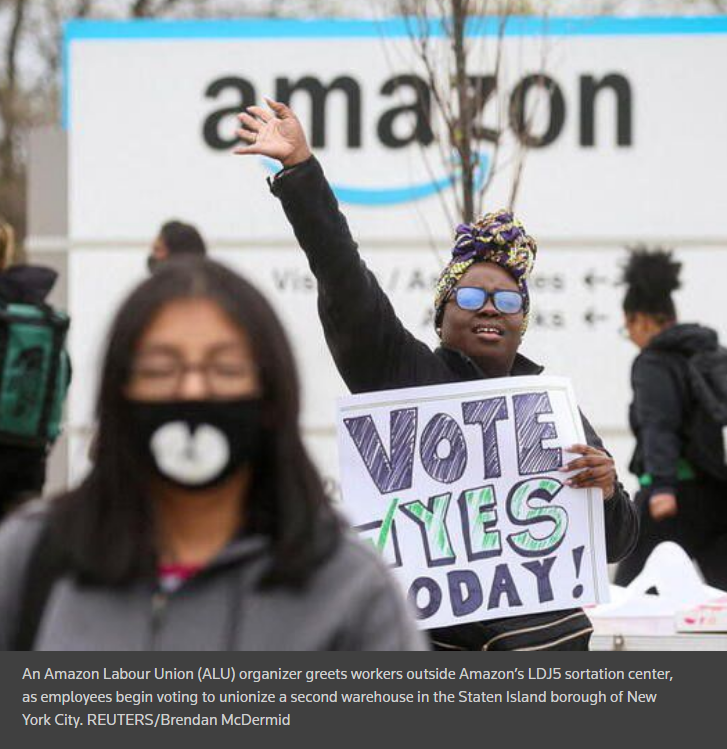 (WASHINGTON, D.C.) - Vice President Kamala Harris will host a White House meeting today (Thursday, May 5th) with Organizers from Unions seeking to represent Workers at Amazon, Starbucks and other employers.

The meeting will include Christian Smalls, who heads the Amazon Labor Union, and other Grassroots Organizers from Starbucks/Service Employees International Union (SEIU), United Paizo Workers/Communications Workers of America (CWA), Baltimore Public Library/International Association of Machinists (IAM), and a Union that has Organized Workers at an outlet of REI, the Outdoor Goods Retailer, a White House official said.

The meeting is discuss "their extraordinary efforts to organize Unions in their workplaces and how their efforts can inspire Workers across the country to make the choice to join or organize a Union," the official added.

Workers at more than 50 U.S. Starbucks cafes have elected to join the Workers United Union, while five stores voted against the Union, out of roughly 240 altogether that have sought to hold elections since August.

Starbucks just told investors it will invest $1 billion in Employees in this fiscal year and said by this Summer its average U.S. pay will be $17 an hour, with starting wages to range from $15 to $23.

Last month, President Joe Biden drew loud applause at a Labor event when he turned a spotlight on Amazon.

After highlighting a Government Task Force on Worker Organization he launched a year ago “to make sure the choice to join a Union belongs to Workers alone,” Biden called out Amazon.

Widely considered the most Pro-Union President in decades, Biden has swiftly ousted Government Officials deemed by Unions to be hostile to Labor and reversed rules of past President Donald Trump that critics said weakened Worker Protections.

Workers at an Amazon warehouse in New York City recently voted to form the first Union at the second-largest U.S. Private Employer and join the Amazon Labor Union under the leadership of Smalls, a former Worker who has argued for higher pay and job security.

Amazon objected and accused the Union of threatening Workers unless they voted to organize, an allegation denied by the Labor Group.

To Directly Access This Labor News Story, Go To: www.reuters.com/business/sustainable-business/white-house-host-meeting-with-key-amazon-union-organizer-official-2022-05-03/