In The State Of Ohio, âThere Are So Many Jobs, But So Few Union Electriciansâ

Published Thursday, May 5, 2022
by BusinessJournalDaily.com 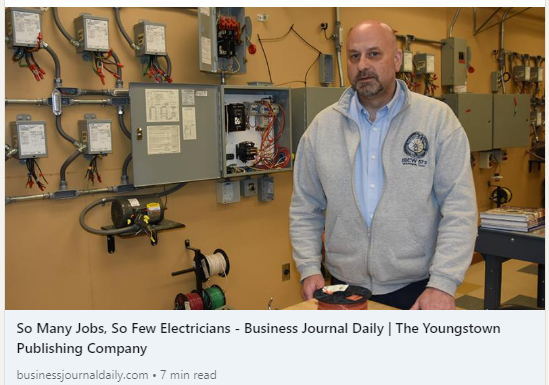 (YOUNGSTOWN, OHIO) – Mike Nemkovich, who serves as Business Manager of the International Brotherhood of Electrical Workers (IBEW) Local 573 in Warren, looks at the dozens of work slips spread across his office desk on a Friday afternoon - all of them requesting Union Electricians to staff a variety of jobs in the region - by Monday.

“I don’t have all the people lined up yet,” Nemkovich laments. “We probably won’t get all of them.  It’s been non-stop here.”

“We’ve been swamped.  Our biggest issue is manpower right now,” he adds.

A similar issue affects IBEW Local 64 in Boardman, where Business Manager Scott Satterlee says its entire 387-strong Membership is on the job.

“Everybody is working and I could use more guys,” he says.

Between the two Union jurisdictions, billions of dollars in new development or construction projects are either underway, recently completed or are in the planning stages.

Moreover, from the vantage point of these IBEW Business Managers, the work isn’t slowing down any time soon.

Much of the present demand is driven by Ultium Cell’s $2.3 billion Electric-Vehicle Battery Cell Production Factory under construction in Lordstown - in the backyard of Local 573.

Since the first quarter of 2020, contractors representing all of the Trades have been on-site, building the 2.8 million-square-foot Ultium plant, Nemkovich says.

The IBEW has figured prominently in the project.

With demand for Electrical Workers at a premium, Nemkovich says Local 573 had to draw from other regions to staff a job of this magnitude.

“There are a lot from Mahoning County, Akron, Canton, Painesville, Cleveland,” he says.

Other IBEW Locals were called in from Western Pennsylvania and as far away as Texas and Louisiana, he says.

In all, Nemkovich says, there are some 400 IBEW Electricians from other Locals staffing jobs in his jurisdiction, in addition to the more than 300 from Local 573.

And more opportunities are on the horizon, he says, citing ongoing work at Lordstown Motors Corporation and the potential for Foxconn assuming ownership of that plant.

“They’re going to need a ton of people in there,” he says.

To Continue Reading This Apprenticeship And Training Labor News Story, Go To: https://businessjournaldaily.com/so-many-jobs-so-few-electricians/