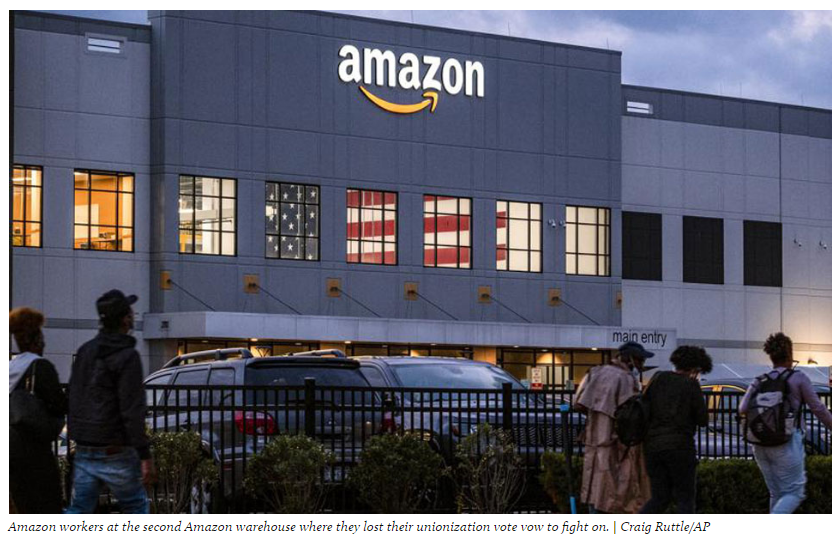 Indeed, they add, they’re planning for representing the 8,300 Workers in the monster retailer’s JFK8 warehouse, where they won convincingly weeks before - and they will be hosting a national training call for Workers at approximately 100 other Amazon warehouses who’ve contacted them about organizing at their facilities.

“Nothing changes.  We organize!  Do not be discouraged or sad.  Be upset and talk to your Co-Workers,” ALU President Christopher Smalls tweeted.

The strong statements came after the National Labor Relations Board (NLRB) tally on Monday (May 2nd) showed the company, owned by one the Nation’s three richest people - Jeff Bezos, beat the Union 618-to380, in votes from Workers at the LDJ5 warehouse.

“Despite (the) outcome I’m proud of the Worker/Organizers of LDJ5,” Smalls’ follow-up tweet said. “They had a tougher challenge after our victory at JFK8.  Our leads should be extremely proud to have given their Co-Workers a right to join a Union @amazonlabor will continue to organize and so should all of you.

“We still have 8,300 to get a contract for” at JFK8, Smalls declared. “Plenty of work to be done @amazonlabor.”

Fellow Organizing Member Justine Medina posted a long comment on the ALU Facebook Page, emphasizing the nationwide meetings: “To all the Amazon Workers around the country reaching out about organizing a Union in your workplace, we are inspired by each and every one of you! You are heroes to the Working Class and to your Co-Workers, even if they don’t yet realize it!  If we have not been able to get back to you yet, you have our deepest apologies.  As Worker-Organizers, we are all volunteers, giving our time before and after our Amazon shifts and on our days off.  We have been inundated with support and messages from not just other Amazon Workers around the U.S. and around the world, but also many various Trade Unionists, Professors and Teachers, grassroots and progressive organizations, and also media, all interested in talking to us.  It’s very difficult to juggle it all while we are still attempting to build our internal organization, move forward with steward and bargaining committee elections at JFK8, force Amazon management to certify our election results, get back to Amazon Workers across the country (and organize the LDJ5 vote).”

The organizing call that will be to told the other Workers from coast to coast are the lessons ALU learned from its organizing drives on Staten Island: “On this call, we will lay out the basics of getting started with your Union Drive, the requirements needed to get an NLRB election scheduled, what pushback and Union-Busting tactics to expect from the bosses - which we know will only intensify - how to build community support outside of Amazon, and more.  For now, we are encouraging workers interested in Unionizing to build Workers’ Committees in your warehouses.”

To Continue Reading This Labor News Report, Go To: www.peoplesworld.org/article/amazon-workers-loss-in-second-warehouse-wont-stop-us/