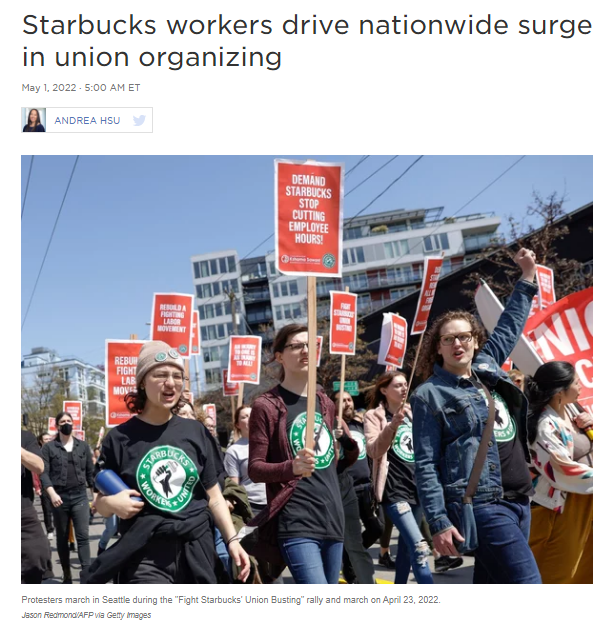 On August 30th, 2021, three Starbucks stores in and around Buffalo, New York filed Union Election Petitions with the National Labor Relations Board (NLRB).

In the eight months since, close to 250 other Starbucks stores have followed, driving a surge in Union Election Petitions not seen since 2015.

The NLRB reports Union Election Petitions are up 57% in the first half of the 2022 fiscal year, compared with the year before.

Starbucks petitions account for nearly a quarter of all petitions filed since January.

The Starbucks Unionizing effort is remarkable, not only because of the stunning speed at which it has spread - more than 40 Starbucks stores have voted to Unionize - but also because food and drink establishments have traditionally been among the least Unionized workplaces in the U.S.

Only 1.2% of all Workers in the sector were Unionized in 2021, according to the U.S. Labor Department.

One notable exception was a Panera Bread shop in Michigan.

So far in 2022, the Accommodations and Food Services Industry makes up 27.5% of all Union Election Petitions, with a small number of independently-owned coffeehouses in cities such as Minneapolis, Philadelphia and Nashville joining hundreds of Starbucks locations all around the country in seeking Union Representation.

"Organizing is contagious," says Kate Bronfenbrenner, Director of Labor Education Research at Cornell University's School of Industrial and Labor Relations (ILR), noting the ease at which Workers can now connect with each other over cell phones and Social Media platforms.

Other factors contributing to the recent wave of organizing: A Labor-friendly administration in the White House; a Democratic majority on the NLRB; and a strong labor market.

Job openings remain at record highs, leading some Workers to cast aside fears over speaking out and demanding more from their employers.

Not all Workers seeking to organize do so through the Union Election Process.

Under the National Labor Relations Act (NLRA), Private Sector Workers may persuade an employer to voluntarily recognize a Union after demonstrating that a majority of Workers support Unionizing.

Bronfenbrenner has found that a far greater share of Private-Sector organizing, including among Hotel Staff and Janitorial Workers, happens outside Union Elections.

Also, the number of Union Election Petitions filed is not indicative of how many Workers overall are seeking representation.

Still, an examination of who is filing election petitions with the NLRB reveals important shifts that are happening in Worker organizing, even as Union Membership in the U.S. remains low, with just over 6% of Private-Sector Workers Unionized.