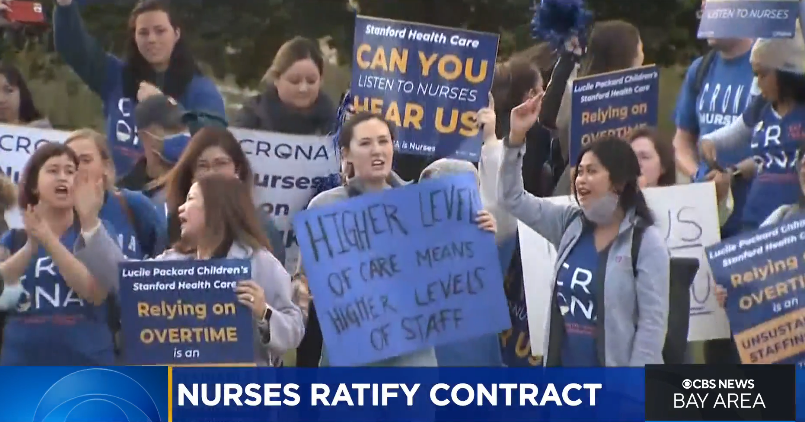 (STANFORD, CALIFORNIA) - Members of the Union representing thousands of striking Stanford Nurses have voted overwhelmingly to approve a new contract offer, bringing an end to the week-long work stoppage.

Stanford and Lucille Packard Children’s Hospital had to cancel some elective surgeries and call in replacement Workers when 5,000 Unionized Nurses hit the picket lines on April 25th.

Union Members voted to ratify the contract over the weekend after reaching a tentative agreement late last week.

The contract will raise Nurses’ salaries by 17% over three years, boost health and retirement benefits, and add an additional week of vacation time starting in 2024.

The Committee for the Recognition of Nursing Achievement (CRONA) issued a statement saying: “CRONA Nurses always knew our worth.  We are glad the hospitals are finally acknowledging it now after a week-long strike that demonstrated how difficult it is to get Nurses with the skills and experience that Stanford and Packard Nurses bring to their patient care.”

Both CRONA and Stanford Representatives are hailing the agreement.

The nurses are slated to return to their jobs today (Tuesday, May 3rd).

The Strike began with Workers calling on management to improve working conditions and address staff shortages.

Roughly 93% of Nurses represented by CRONA voted to authorize the Strike in early April after their contract with Stanford expired on March 31st.

To Directly Access This Labor News Report, Go To: https://sanfrancisco.cbslocal.com/2022/05/02/stanford-nurses-strike-contract-approved-crona/