âIn Their Own Labor Wordsâ - UAW Region 9 International Representative Lonnie Everett: âVoting Is A Significant Part Of Our Lives Because We Know The Power Of The Vote!â 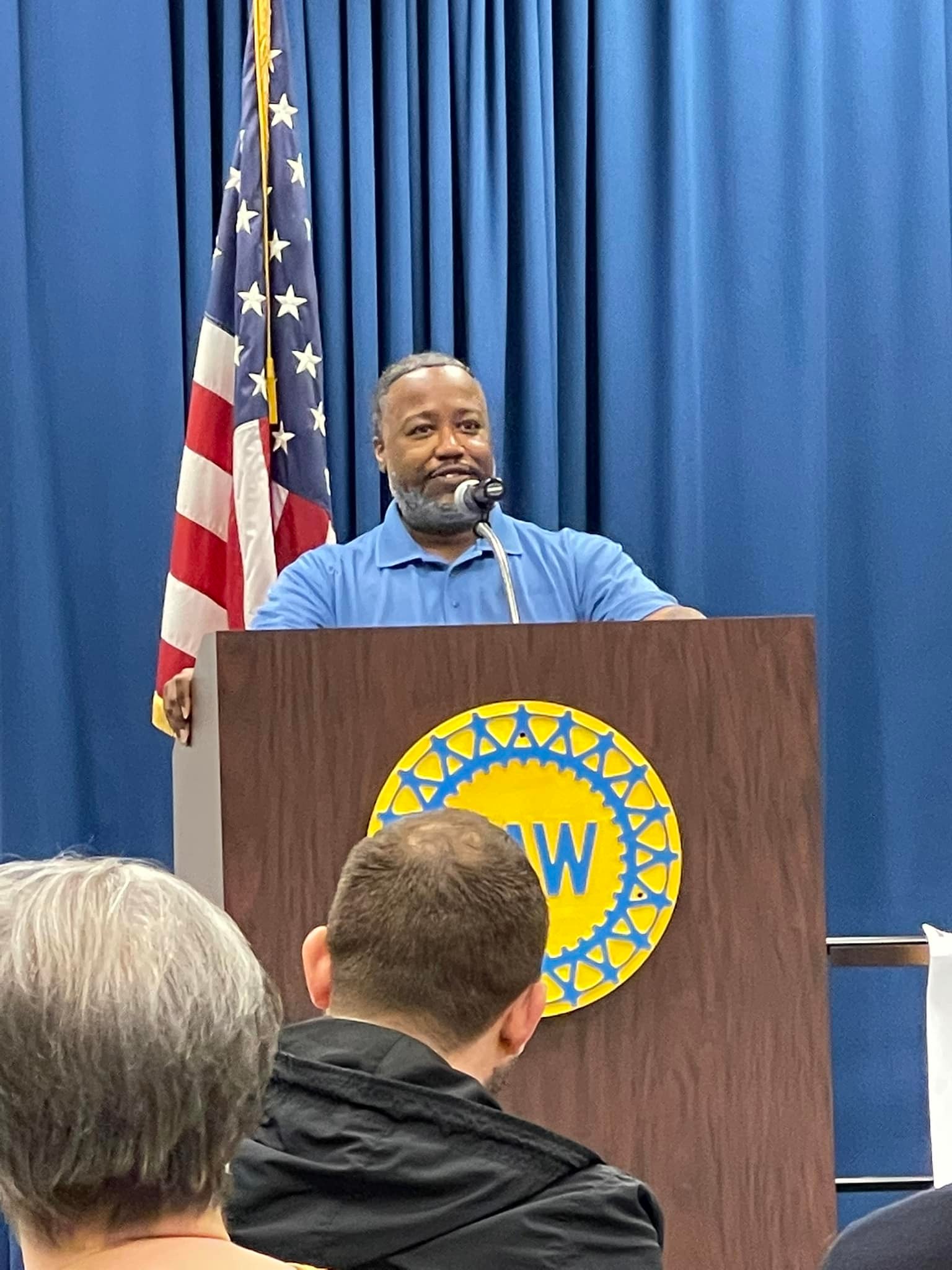 WNYLaborToday.com Editor’s Note:  Under the theme Reconnecting The Movement, Western New York AFL-CIO Area Labor Federation (WNYALF) President Peter DeJesus, Jr. made a conscious effort to diversify those who addressed the more than 100 Central Labor Council Presidents, Union Leaders and Representatives, and Friends of Labor who were in attendance at the its Annual WNYALF Meeting that was held back in March.  “These are the ‘fresh faces’ of the Labor Movement,” DeJesus said before introducing each who spoke, including United Auto Workers (UAW) Region 9 International Representative Lonnie Everett (Pictured Above/WNYLaborToday.com Photo).  Everett made an impassioned address, which he said - in part: “I can tell you about the Freedom to Vote Act and the John R. Lewis Voting Rights Advancement Act.  Instead, I would like to give you homework to research these pieces of legislation and talk to your households, your families, your friends and your Co-Workers.  Here we are in 2022 and still fighting to secure Voting Rights, still renewing it periodically.  2013 ‘Shelby vs. Holder’ weakened the act by eliminating the pre-clearance’s set forth in the original 1965 Act that protected Minority Voters from discrimination, intimidation, polling closures, restrictive voter ID and Proof of Citizenship Laws.  Do you know what it’s like to be out to dinner and someone walk up to you to tell you what you better do.  Do you know what it’s like to have entities using fear tactics or spending money to carry out the logistics of threats to scare you away?  That’s today!  That’s today in this day and age and these things are still prevalent.  When you think about what’s important to you and your communities, what’s important to you as Union Leadership and your Memberships, voting is a significant part of our lives because we know the power of the vote!   The freedom of the vote!   We need the Build Back Better Act and the PRO (Protecting the Right to Organize) Act so we can continue to build and organize in a Democratic society!  I’ll close with this: Lead it, Bleed it and Speak Truth to Power!”  In January (2022), Everett was featured in the following piece that was distributed by the WNYALF.  It was entitled, Why I Fight:

Lonnie Everett was born and raised in Buffalo, New York.

Since 2000, Lonnie has been a Production Worker and Union Representative for the United Auto Workers (UAW) at what was once Delphi/Harrison Radiator in Lockport, New York, and is today the General Motors Company Holding Facility.

As impressive as this list is, it doesn’t do justice to the remarkable bravery Lonnie showed in 2012 - and again in 2015.

This is because Lonnie volunteered to go to Mississippi, to work on the Nissan Organizing Campaign.

As an African-American, he chose to put his health and safety on the line organizing the unorganized in Neshoba County, Mississippi.

In 1964, Neshoba County was the location of one of the seminal events of the Civil Rights Movement.

In the Summer of that year, three Civil Right Workers - Andrew Goodman, Michael Schwerner and James Chaney, were murdered in cold blood by members of the Ku Klux Klan.

The movie Mississippi Burning was based on this terrible event in the struggle for Civil Rights.

Lonnie was part of an organizing effort that went into the heart of the Deep South, a region where the KKK is still very much alive.

We interviewed Lonnie about his experiences.

We discovered that inside his calm demeanor and relaxed personality is a man of great courage and resolve.

“There are people in Mississippi who want the Union,” he stated.

He further said he risked his career and at times his life because “the Union gives ordinary people a voice to be heard”.

He has taken this stand as he has with all of his Union activity to “speak for and represent the Rank-and-File people”.

He told us that as “an African American from the North,” he was going to speak with plenty of White Southerners, including those who were flying the Confederate flag and the swastika in front of their homes.”

He did so, “proudly wearing his Union identification” and “mostly found open doors”.

The campaign at Nissan was not crowned with success - but, Lonnie is proud of the work that was done.

He and his UAW compatriots did “give the Nissan Workers the opportunity to rise up and become independent of the employer.”

There is no doubt that there will be more and even stronger efforts in the future.

This is why we fight.