âKeep Them In Your Memories, And Letâs Do Whatever We Can To Protect Everybody, Union Or Non-Unionâ - Workersâ Memorial Day In New York City: âRemember The Dead And âProtect Everybodyââ 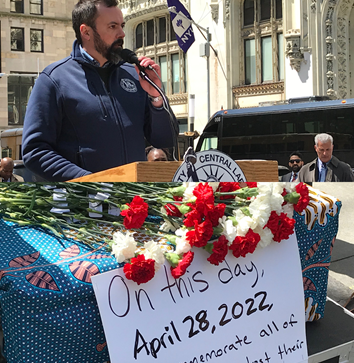 Those were some of the names intoned Thursday (April 28th) at the Workers’ Memorial Day commemoration on Broadway near City Hall, with a red or white carnation placed on a box for each one.

The NYCCLC and the New York Committee on Occupational Safety and Health, which organized the event, say at least 46 Workers in the city died on the job in the past year.

Fifteen of those were Construction Workers, 12 were Deliveristas who were working for App-based delivery services and 13 were murdered.

“We don’t have the name of every worker who lost their lives,” NYCOSH Director Charlene Obernauer told the crowd of more than 100 people.

She said it was “scary” to research deaths and “not even be able to find their names.”

There is no primary or official list of on-the-job deaths, the CLC and NYCOSH said in a statement.

They compiled their list of 46 deaths from media reports, information from their affiliates and community organizations, and word of mouth.

Her Bill would “mirror” and expand the 2020 New York State Law for reporting deaths on construction jobs that she sponsored when she was in the Assembly, she told LaborPress.

It would require all employers to report any fatal injury within 72 hours and use that information to create a registry of on-the-job deaths.

That, she said, would facilitate investigations of those deaths, and could be used to identify problem employers.

The point of the commemoration, she told the crowd, was not just reflecting on the people’s names, “but to recognize the conditions that cause their deaths, and act for change.”

State Senate Labor Committee Chair Jessica Ramos (Democrat-Queens) blamed “the race to the bottom from so many employers.”

“I work in rage because so many employers see Workers as disposable.  It’s my responsibility to find every gap and every loophole that allows bad bosses to cut corners on Worker safety,” Ramos said.

If wage theft is a problem on a job, she added, that’s also usually “a clear indicator” of dangerous conditions.

In construction, most fatal accidents are on Non-Union jobs.

In 2020, a year where the amount of work was shrunk by the COVID-19 Pandemic, 23 of the 29 fatal accidents in New York State that were investigated by the U.S. Occupational Safety and Health Administration (OSHA) were on Non-Union sites, according to NYCOSH’s annual Deadly Skyline Report, which was released in February.

The death rate for Latino Workers was almost twice the overall rate.

Many Non-Union Construction Workers are Immigrants.

To Continue Reading This Labor News Story, Go To: www.laborpress.org/workers-memorial-day-remember-the-dead-and-protect-everybody/