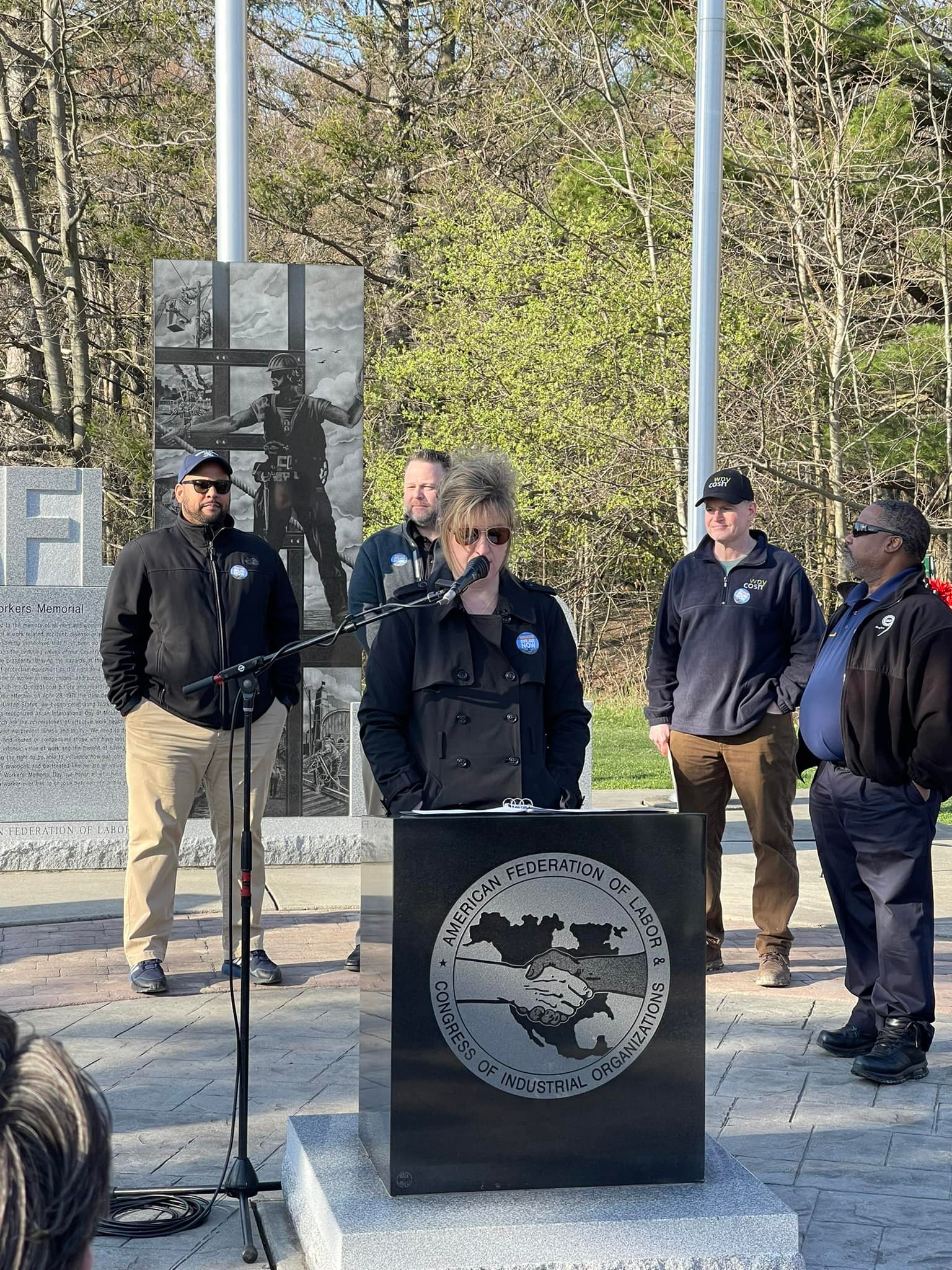 Worker death, injuries and sickness take place on the job - every day, in a variety of workplace setting across the United States.

And it’s Organized Labor that stands in forefront, fighting for Worker safety in order to make sure that every Worker who goes to work in the morning comes back home at night - safe and sound.

But unfortunately, that does not happen 100% of the time.

On Thursday (April 28th), Representatives from the Western New York AFL-CIO Area Labor Federation (WNYALF) joined with the Buffalo AFL-CIO Central Labor Council to hold its annual Workers’ Memorial Remembrance Event at a site designed to remember the dead and fight like hell for the living at Chestnut Ridge Park in Orchard Park, just south of Buffalo. 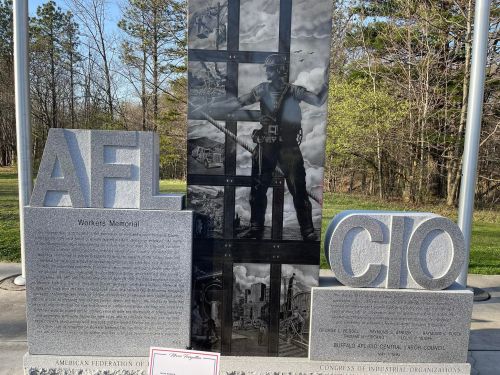 “We’re ‘here to celebrate our lost Workers and to give comfort and strength to those who’ve lost loved ones,’” said Charmaine Bowman, President of the Buffalo Chapter of the Coalition of Black Unionists (CBTU), who opened the chilly ceremony with an invocation.

“These Workers ‘deserve to be honored,’” said Buffalo Labor Council President Denise Abbott, who fought back tears as she publicly recognized two pilots from the Buffalo’s Mercy Flight non-profit organization who lost their lives earlier in the week when their helicopter went down in Genesee County. 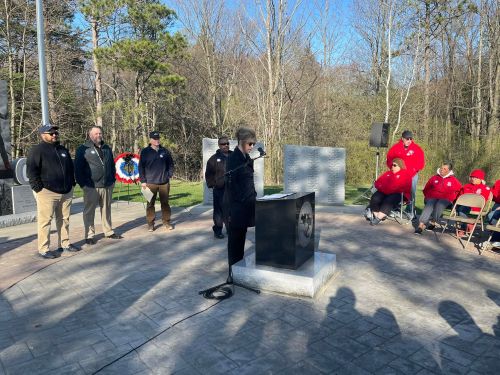 “Lives ‘continue to be lost and this week is especially hard as friends were lost.’  ‘We value our Workers and we might fight for safer’ workplace conditions.  ‘And now, more Workers are fighting to Unionize.’  ‘So we’re also here to put employers (who fail to provide their Employees with a safe workplace) on notice, we’re coming for you,” said Abbott, who’s served as Health and Safety Director for Communications Workers of America (CWA) Local 1168 and has worked as a Registered Nurse (RN) in the Emergency Room at North Tonawanda’s DeGraff Memorial Hospital.

Earlier this week, the National AFL-CIO this week released its 31st annual report: Death on the Job: The Toll of Neglect, a national and State-by-State profile of Worker safety and health. 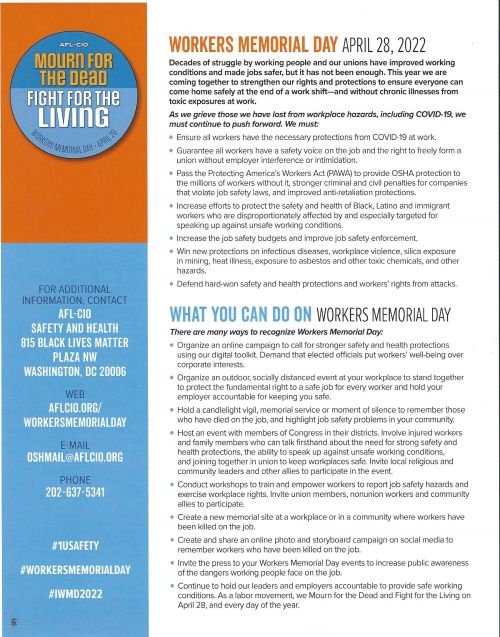 WNYALF President Peter DeJesus told the dozens of representative from area Unions, local and State Elected Officials and Friends of Labor: “This is a ‘special day to reflect on lives lost and to recommit ourselves to the fight so there are no more injuries, so there is no more loss of life.’  ‘If we (the Labor Movement) don’t care about and protect them, no one will.’  ‘If we commit this to each other, there will be no more loss of life.’  ‘And, we have to have the backbone to protect them.’” 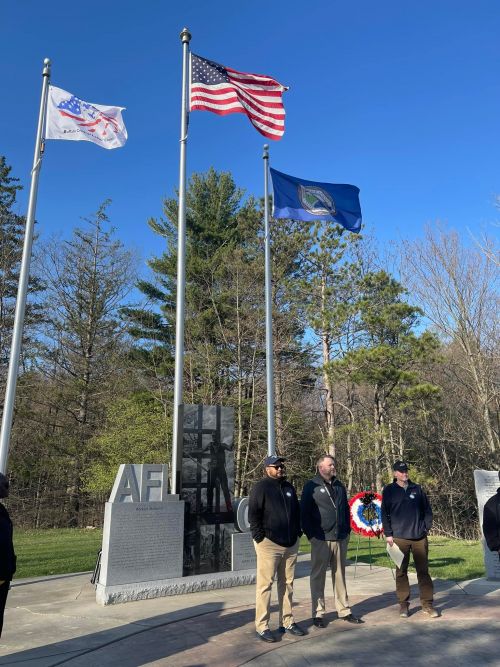 United Auto Workers’ (UAW) Region 9 International Representative Lonnie Everett also spoke: “Generations ‘have put their lives on the line and without it, there would be no right to’ workplace safety.  ‘This is an international day of mourning’ and Workers ‘need to be treated like we are valued.’  ‘It should never come down to a choice between your life or a paycheck.’”

Brian Brown-Cashdollar, who serves as Executive Director of the Western New York Council on Occupational Safety and Health (WNYCOSH), made it a point to underscore that holding such ceremonies unfortunately helps to normalize the risks associated with safety in the workplace.

Also addressing those in attendance was Michael Scime, the Buffalo Area Director for the U.S. Occupational Safety & Health Administration (OSHA), who said: “Thirteen Americans die - ‘each day,’ in the workplace.  ‘While we’ve made great strides (in Worker safety), here we are, in 2022 and (Workers) are still dying in trench collapse and falls from scaffolds.’  ‘We still have a lot to do because these (death and injuries) are preventable’ - and employers ‘have to do the right thing.’  ‘No job is worth risking your life for.’  ‘We all share the same goal - a safe workplace and we can do it because we have the enforcement tools.’” 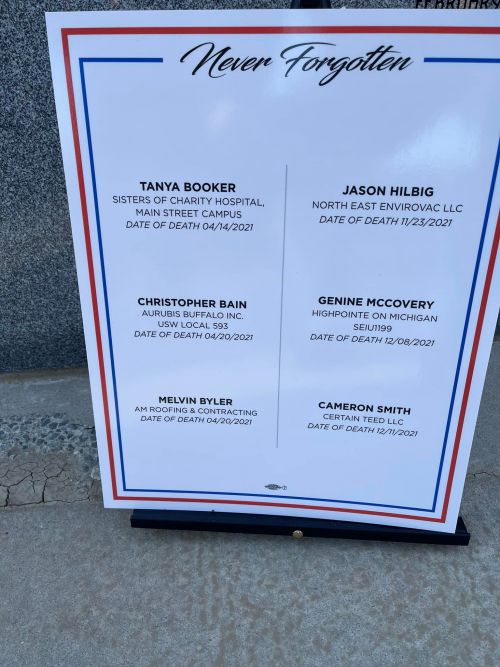 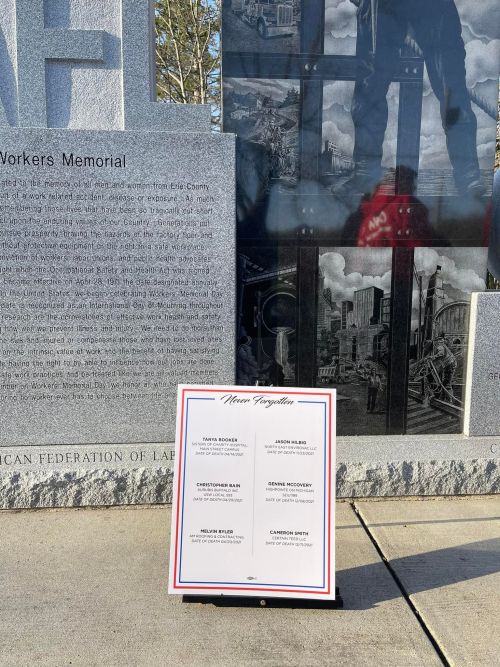 The WNYALF and Buffalo Labor Council also had the names of several Workers who had died on the job over the past 12 months read aloud, as well as posted in front of the impressive marble Workers’ Memorial that displays a number of Workers toiling in a variety of workplaces.