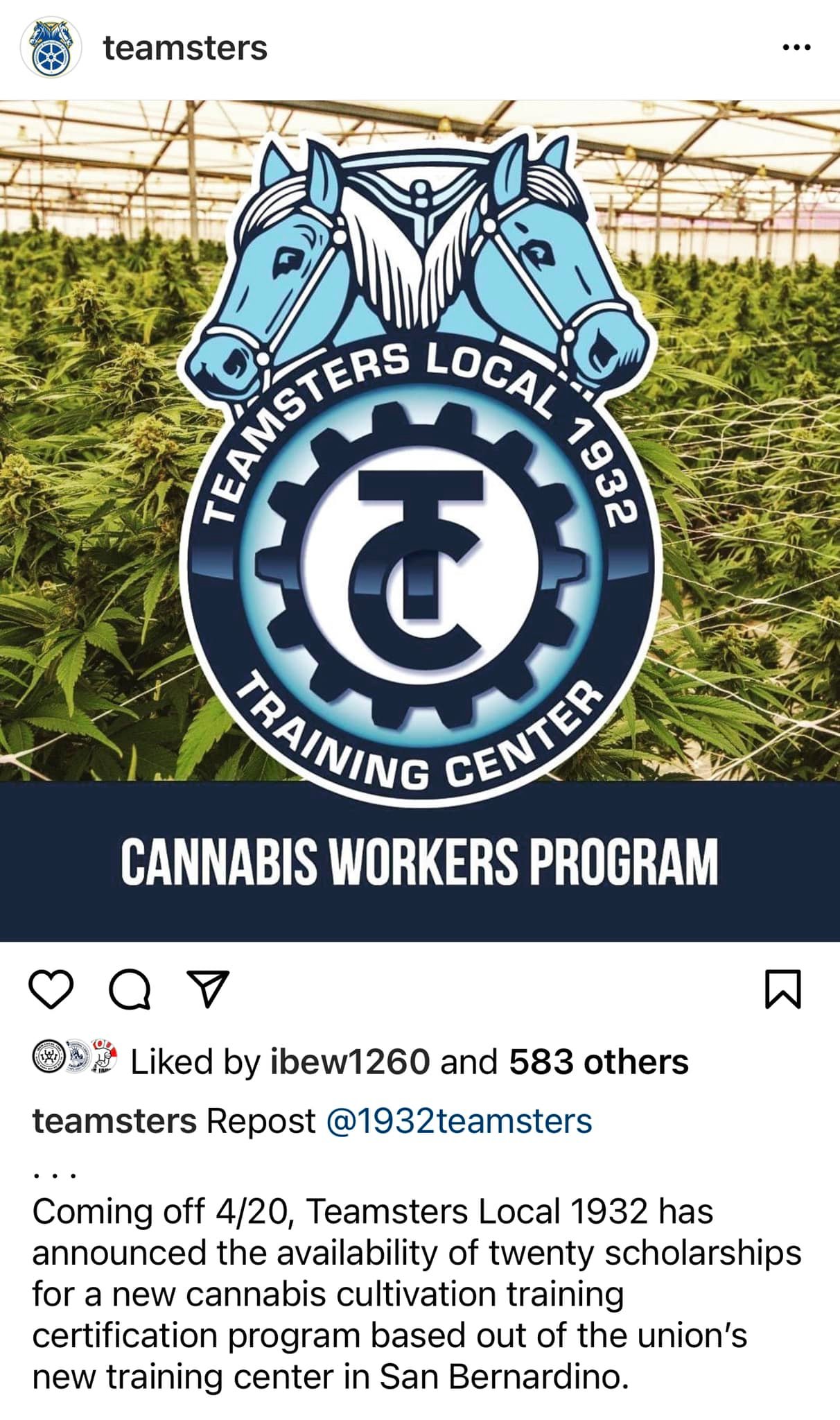 (SAN BERNADINO, CALIFORNIA) - Teamsters Local 1932, which represents more than 14,000 members across Southern California’s Inland Empire Region, has announced the availability of 20 scholarships for a new Cannabis Cultivation Training Certification Program based out of the Union’s new Training Center in San Bernardino.

“This Union is bringing together Cannabis Workers to improve this craft and is also creating pathways for Workers to advance in the industry with education and certification,” Teamsters Local 1932 Secretary-Treasurer Randy Korgan said. “With a trained workforce and our initiatives to involve Union Members in political action - that will help the cannabis business and its Workers thrive, there are brighter days ahead for the field.”

The Training Certification Program Scholarships align with the Union’s goal of raising standards across the Cannabis Industry.

Future courses are planned for manufacturing and retail work.

The program also prominently features seminars from the Agricultural Labor Relations Board and experts on U.S. Occupational Safety & Health Administration (OSHA) Policies to ensure Workers can build their knowledge on safety and their rights at work.

As the first Unionized Workforce in Southern California, Tikun of Adelanto will be utilizing the certification program for a new Apprenticeship pathway, which includes hands-on experience.

The City of Adelanto is also exploring initiatives to help support certification and training for local residents, with the help of the Local 1932 Training Center.

“The City of Adelanto will have the premier cannabis workforce,” Adelanto Mayor Gabriel Reyes said. “We look forward to providing our residents the opportunity to achieve their certification in this growing industry with the help of Teamsters Local 1932.  Our goal is to be known as the ‘capital of the Cannabis Industry,’ and to be that, we need to have a trained workforce that can produce premier craftsmanship.”

The Cannabis Industry employed 415,000 Full-Time Workers across the country in 2021, an increase of about 30% from 2020, according to industry news published MJBizDaily.

By increasing the availability of training and certification to Workers in Southern California, Local 1932 aims to offer current Members and prospective Members a way to improve their employer’s crops and further professionalize the industry’s cultivation workforce.

To Directly Access This Apprenticeship And Training Labor News Story, Go To: https://teamster.org/2022/04/higher-standards-for-cannabis-workers-teamsters-union-introduces-cannabis-cultivation-training-program/