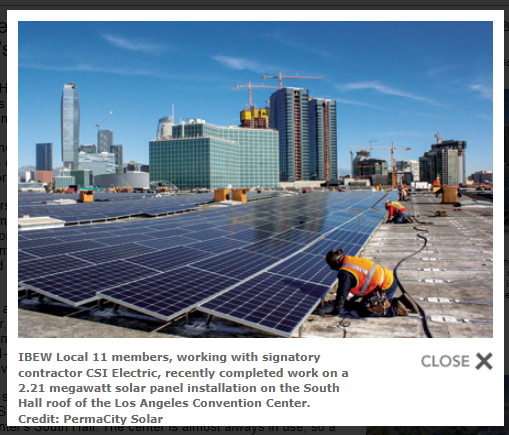 (ST. LOUIS, MISSOURI) - Leaders at St. Louis International Brotherhood of Electrical Workers (IBEW) Local 1 are doing their part to make sure the IBEW plays a big role in the booming growth of solar energy in their region.

The IBEW Local has assumed a leadership role in an innovative pilot program designed to help city leaders identify and recruit Men and Women into the Electrical Field, especially those from often untapped communities.

“We’re doing a good job of keeping up with the demand for solar and there’s no end of that demand in sight,” IBEW Local 1 Business Manager Frank Jacobs said. “This pilot has the potential to help us stay ahead for years to come and give more people the chance to get a solid, Middle-Class Union job in this critical field.”

The various restrictions associated with the COVID-19 Pandemic, however, had delayed the start of the city’s actual recruitment process.

“We have a good, longstanding relationship with the city,” Jacobs said. “They knew they could rely on the IBEW to be a willing and knowledgeable partner in their efforts.”

A big advantage to the pilot, he said, is that it’s built using established, existing local resources, rather than trying to come up with something completely new.

The city is well acquainted with Local 1’s decades-long commitment to diversity.

Its community outreach efforts extend into dozens of St. Louis-area High School Career Fairs each year, with an eye toward broadening electrical career opportunities for Minorities by targeting students in school districts with large minority populations.

In recent years, anywhere from a quarter to nearly half of Local 1’s Apprentices have been Minorities, with the mentoring program at the Local’s Electrical Industry Training Center helping to produce a more than a 90% graduation rate.

For this workforce development pilot, an application process helps to narrow the list of recruits to no more than 20.

After these Men and women are selected, some of the other pilot partners - such as the St. Louis Building and Construction Trades Council’s Building Union Diversity Program, will help ensure they are prepared to handle the challenges of working in a professional environment.

Other pilot partners will be charged with helping participants overcome some potential employment barriers, such as a lack of access to transportation, childcare and work clothes.

Once all of that has been sorted out, the IBEW component will kick in, with the Journeymen Wiremen of IBEW Local 1 spending a few days sharing some of their solar installation expertise, mixing desk-based learning with on-the-job work to give participants a taste of what a typical Electrician might experience installing solar arrays.

Trainers from Local 1 will then assess participants’ interest and help them determine whether an Apprenticeship, and eventual solar installation work, is for them.

And there are plenty of jobs to be had, especially in the solar field.

Major solar projects on their way to the St. Louis area, including a joint venture announced between IBEW Signatory Contractor Aschinger Electric and Azimuth Energy that plans to focus on utility-scale and commercial solar projects.

To Continue Reading This Apprenticeship And Training Labor News Story, Go To: www.ibew.org/media-center/Articles/21Daily/2001/210113_Expanding