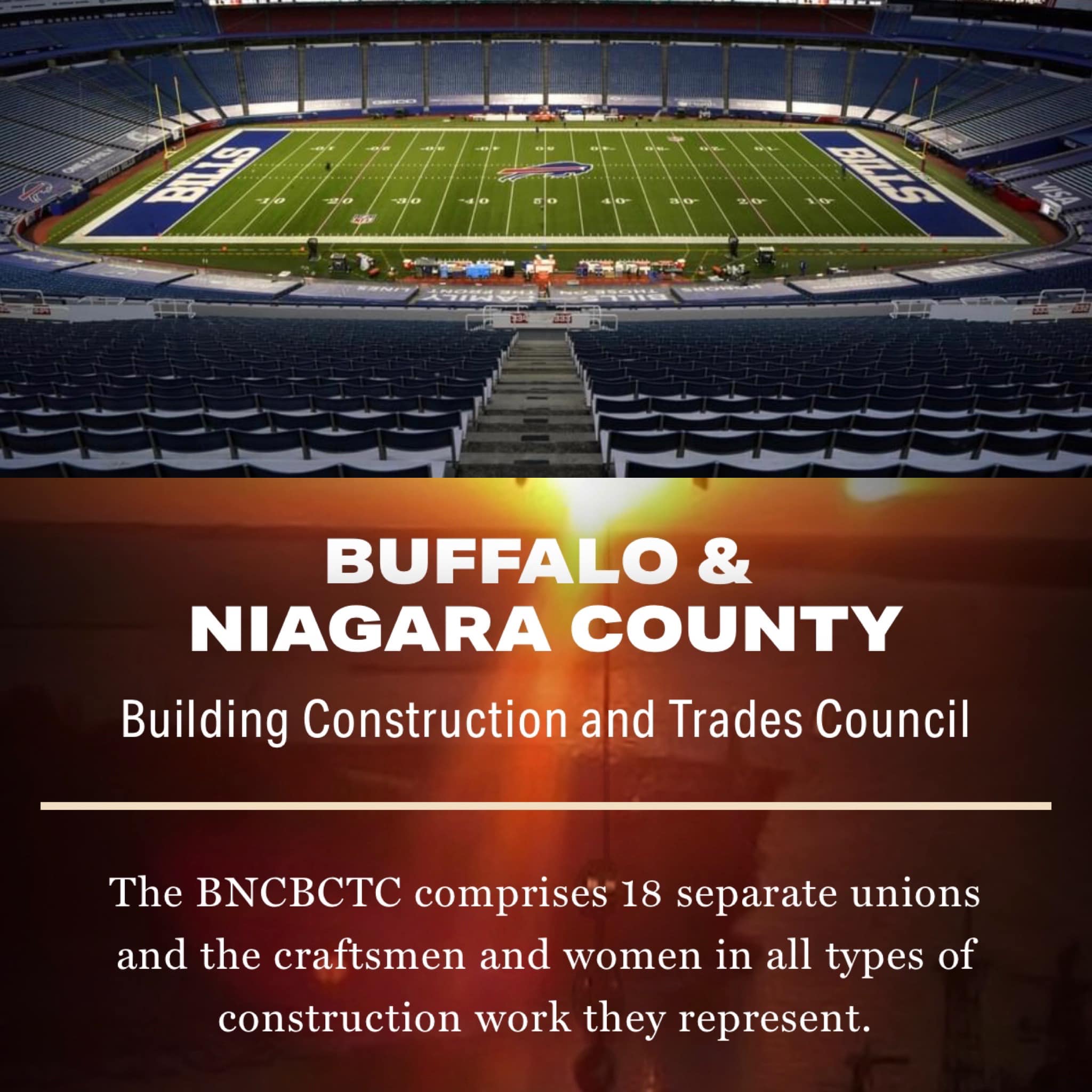 (ORCHARD PARK, NEW YORK) – It was indeed strange to scan through a press release from Governor Kathy Hochul on the agreement that had been reached between New York State, Erie County and the National Football League’s (NFL) Buffalo Bills for a new $1.4 billion stadium in Orchard Park - which was heralded as the largest construction project in Western New York History that will be built with Union Labor, and not see any representative of the Buffalo & Niagara County Building & Construction Trades Council quoted in it.

Sure, there were expected comments included from New York State Building and Construction Trades Council President Gary LaBarbera and New York State AFL-CIO President Mario Cilento to cover the Union side - but strangely enough, nothing from the Buffalo/Niagara Trades, whose Members, indecently, will be doing the work.

So, WNYLaborToday.com chased down several of those local Leaders to get their reaction to the news and what it means for the Trades Council, their Member Unions and their individual Members, starting with Buffalo & Niagara Trades Council President Paul Brown.

“We’re ‘very excited’ about the project that will start in Spring 2023 and average about (600 to 700) of our Members working out there at a time.  We have to ‘thank’ Governor Hochul.  ‘She did a tremendous job,’” said Brown of the new stadium that will be built next to the Bills’ existing Highmark Stadium in Orchard Park, where the team has played since 1973.

“It ‘also means we’ll be able to recruit more Apprentices’ for the three-year project, and with Amazon (looking to build a mammoth facility in Niagara County) and other work - such as what we’ve done at the new Albright-Knox Art Gallery (in Buffalo), ‘we should be very busy.’  ‘We’ve already had a good year because there is so much work going on,’” Brown told Your On-Line Labor Newspaper.

Here what some of the other Trades Representatives told WNYLaborToday.com:

Ironworkers Local 6 Business Manager Tom Halligan: “All the Trades ‘will have a lot of work’ for the next three to four years, especially after coming off a couple of years of dealing with COVID.  And we’ll see what comes from the Federal Infrastructure Bill for bridges and roadwork - ‘that’s going to put a lot of people to work too.’  ‘One good thing is that it will be built under a PLA’ (Project Labor Agreement) that we and (Erie County Executive Mark) Poloncarz ‘pushed hard for.’  ‘Unless you have the support of good politicians, you won’t get a PLA - because Non-Union developers claim it will drive up costs, which in B.S.’  ‘We needed a new stadium and now we got it.’  ‘Obviously it’s a great opportunity for everyone and under a PLA there will be opportunities for Minorities and Women (being hired) on the project.’  For us, we just took in (15) Apprentices after taking in another (15) in September after usually taking in (15) a year.  And, we’ll be looking to bring in another (15) in January.”

International Union of Operating Engineers (IUOE) Local 17 Business Manager Gary Swain: “‘Let’s face it, it is positive news.’  The local community ‘will greatly benefit from this too.’  ‘And you know what?’  ‘You cannot do a job of that size without’ a PLA.  ‘The boon will be huge and not just in terms of Workers.’  ‘You’ll have so many other companies and Workers involved, from concrete to steel manufacturing.’  We have (1,800) active Members in our Union and its estimated ($100 million) of the stadium project ‘will be spent on labor.’  ‘We’ll be taking in people from all over and there will be a need for more Workers - and the Building Trades is the largest supplier of trained Apprentices because people just don’t know what it takes to work on a construction job - you have got to be trained.’  Right now, we have (40) Apprentices (in the IUOE Local 17 Training Program) and we’ve been taking in more and more, including Women and Native Americans.  ‘Looking at our future, we’ll have enough work for years.’”

Laborers Local 210 Business Manager Peter Capitano: “We’re ‘ecstatic, it’s a long time coming.’  It will be the ‘only’ NFL Stadium ‘in New York State’ (the New York Giants and Jets play in New Jersey) ‘and we’re looking forward (to building) it.’  ‘I’ve got to give praise to the Governor for getting it over the goal line.’  We’ll have (200 to 300) of our Members working on the project (at a time).  We’ve taken in (16) Apprentices this year ‘and signing up more’ (Non-Union) contractors.  ‘It’s looking good for us, not only with the stadium, but other work’ - there’s some ($120 million) in work coming, including a ($20 million) at Buffalo State College.”

SMART (Sheet Metal, Air, Rail and Transportation Workers) Local 71 Business Manager Paul Crist: “‘Anytime you get this kind of news, you’re always happy.’  ‘There will be a lot of temperature-controlled areas in this stadium and air (indoor air quality) is our bread and butter.’  We’ll have as many as (35) of our Members working on the HVAC and another (50 to 60) working on other things.  We have (65) Apprentices right now and we’ll be adding additional Apprentices.  ‘And we have even more work coming’ - from finishing up the Albright-Knox (Art Museum) to Amazon in Niagara County to the Lockport hospital project to the dairy/yogurt plant in Batavia and a cheese plant in Allegany County.”

U.A. Plumbers & Steamfitters Local 22 Business Manager Sean Redden: “The stadium project ‘will be really good’ for Local 22.  ‘I’m very happy and excited for Buffalo, because we’ll have (the Bills) here for another (30) years.’  My son is (22) ‘and he couldn’t be happier.’  ‘You have to thank (Governor) Hochul because it’s good for Western New York.’  My Father was the Business Manager for the Plumbers Union back in (1973) when (then Rich) Stadium was built and he worked on that project.  We’ll have about (100) working on (the new stadium), ‘which will be fantastic’ - and we’ll be bringing in another (35) Apprentices to add to the (120) we have.  ‘It’s time to begin recruiting.’”

According to the Governor’s Office, the stadium project is projected to create as many as 10,000 construction jobs - using Union Labor in accordance with the agreed-to PLA, which the Bills will negotiate with the Buffalo/Niagara Building Trades.

The deal also requires the Bills to agree to a Community Benefits Agreement, which is to be negotiated.

The Governor’s Office said the economic and tax impacts generated from the team will support more than 100% of the public share of the new stadium cost.

Said Hochul: "I went into these negotiations trying to answer three questions - how long can we keep the Bills in Buffalo, how can we make sure this project benefits the hard-working men and women of Western New York and how can we get the best deal for taxpayers?  I'm pleased that after months of negotiations, we've come out with the best answers possible - the Bills will stay in Buffalo for another thirty years, the project will create (10,000) Union jobs and New Yorkers can rest assured that their investment will be recouped by the economic activity the team generates."

The Bills franchise is said to be a proven economic driver for the Buffalo Region and the State, generating $27 million annually in direct income, sales and use taxes for New York State, Erie County and Buffalo.

State Leaders believe these revenues will grow and will cumulatively amount to more than $1.6 billion over the 30-year lease period.

Furthermore, fans who attend games from across New York, the U.S. and Canada and spend money locally that would not otherwise be spent in the region will result in an economic impact of more than $385 million annually.

In 2013, 73% of stadium renovation was publicly financed.

The 30-year agreement details the construction of a new stadium with a minimum of 60,000 seats in Orchard Park that will be designed and constructed by the Bills.

The Bills will begin design of the new stadium immediately and all parties will begin negotiations on extending the team's current lease for Highmark Stadium that expires in 2023.

Erie County will transfer ownership of the current stadium and adjoining complex, which includes practice facilities and office space, to the State.

The State will own the new stadium and adjoining complex, which will be leased to the Bills.

In the event the Bills default on the agreement, the State and County have the right to go to court to enforce non-relocation terms.

The new stadium can be used for civic purposes, such as, if necessary, vaccination delivery and election operations - as well as in emergencies.

For More On This Labor News Story, Which Includes Information Supplied By The Governor’s Office, Can Be Directly Accessed At: www.governor.ny.gov/news/governor-hochul-announces-joint-public-private-agreement-ensure-buffalo-bills-remain-new-york