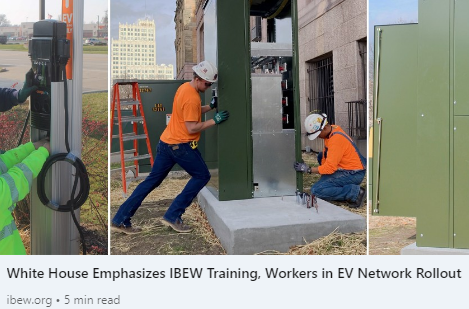 The move is an important first step in following through on Biden’s pledge that America’s expanding EV Charging Network will be built by IBEW Members.

“We’re pleased that this guidance sets the foundation for the development of National EV Charging Standards but, more importantly, that it recognizes the need for quality training by specifically mentioning EVITP, which will help ensure the creation of good, Union jobs,” IBEW President Lonnie Stephenson said.

The National Electric Vehicle Infrastructure guidance strongly encourages jurisdictions to consider Workers’ experience and training when applying for a share of the program’s funding.

“This includes ensuring the workforce is trained in high-quality training programs like the Electric Vehicle Infrastructure Training Program (EVITP),” the guidance reads.

At the February press conference outside U.S. Department of Transportation (USDOT) Headquarters in Washington, D.C., several Biden Administration Officials announced nearly $5 billion will be made available under NEVI to all 50 states, plus Puerto Rico and the District of Columbia, over the next five years to help create the network along designated Alternative Fuel Corridors.

Unions, specifically the IBEW, were mentioned several times during the conference.

“Once we get shovels in the ground to put these chargers up, it is going to mean jobs, jobs, jobs and more jobs,” said U.S. Energy Secretary Jennifer Granholm, who related her recent conversation about the coming work with an IBEW Apprentice in Virginia named Danielle.

“The jobs that are good-paying Union jobs all over the country, in every pocket of this country, and the training that goes with (them]) is a huge opportunity for communities,” she said.

“They’ll be installed up and down highway corridors across the country by IBEW Workers and the benefits will ripple out thousands of miles away,” he said.

The U.S. Department of Energy estimates there are already 43,000 charging stations installed across the country.

NEVI aims to add half a million more stations over the next five to eight years, locating them strategically near off-ramps and rest areas and no more than 50 miles from each other.

The specific mention of EVITP in the guidance, however, didn’t just happen in a vacuum, said Government Affairs Department Director Danielle Eckert.

“There are other, proprietary Training Programs out there that are against EVITP at all levels,” she said.

Singling out EVITP, though, should help boost jurisdictions’ interest in the program, she said, acknowledging the work of IBEW Members who are helping to make sure officials understand EVITP’s quality.

“While interest and media attention in EVITP are currently ‘hot,’ electric vehicle charging system training has been available from us for ten years now,” said Jason Lunardini, Assistant Director of the Electrical Training Alliance and a Member of Pittsburgh IBEW Local 5.

To Continue Reading This Apprenticeship And Training Labor News Story, Go To: www.ibew.org/media-center/Articles/22Daily/2204/220408_WhiteHouse