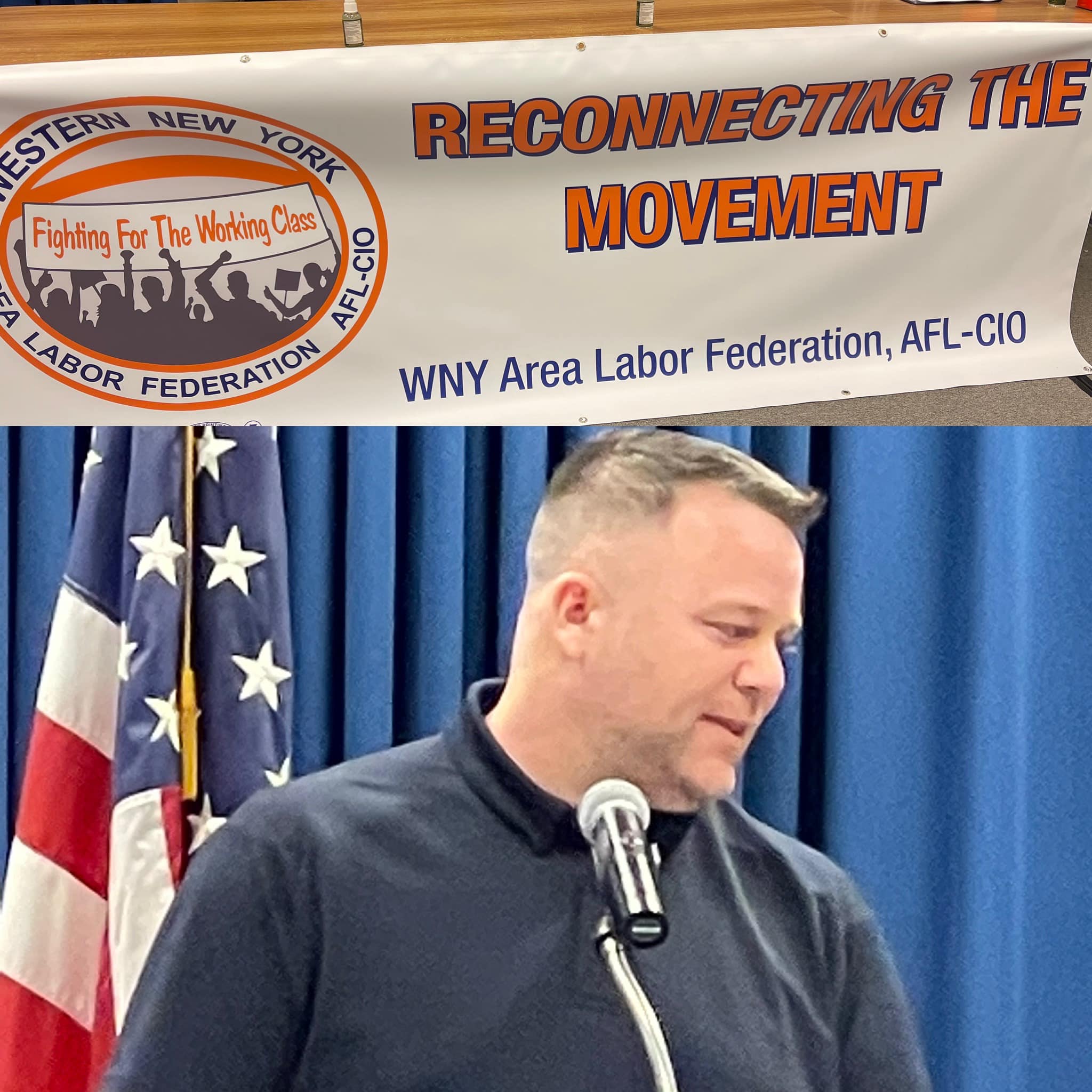 WNYLaborToday.com Editor’s Note: Under the theme Reconnecting The Movement, Western New York AFL-CIO Area Labor Federation (WNYALF) President Peter DeJesus, Jr. made a conscious effort to diversify those who addressed the more than 100 Central Labor Council Presidents, Union Leaders and Representatives, and Friends of Labor who were in attendance at the recently-held Annual WNYALF Meeting.  “These are the ‘fresh faces’ of the Labor Movement,” DeJesus said before introducing each who spoke, including Bakery, Confectionery, Tobacco Workers and Grain Millers' International Union (BCTGM) Local 36G President Anthony Barker (Pictured Above/WNYLaborToday.com Photo) - a 20-year Union Member who has served as President of his Local for the past 13 months, and whose BCTGM Local represents Workers 600 Members who are employed at several companies in the Buffalo area, most notably at General Mills’ Cereal and Flour Plants.  Barker’s address was titled: Economics in the Labor Movement.

I would like to talk about economics and the BCTGM International’s strikes this (past) year.

As you know we were forced to Strike against Frito Lay, Nabisco, Kellogg's - and most recently Jon Donaire, a subsidiary of (Buffalo-headquartered) Rich Products.

Throughout this pandemic, corporations have recorded billion-dollar profits - while Employees pay stayed the same.

Yes, there was pizza parties and t-shirts that said how important we are to them - maybe some additional COVID pay too, but that stopped and profits kept rising.

Contracts expired and negotiations broke down due to corporate greed wanting to slash benefits.

Members of BCTGM started a major movement for equality and pay and negotiated benefits.

While some call it benefits, I prefer the term human necessities.

BCTGM Local 218 in Topeka, Kansas was the first BCTGM Strike.

They were frustrated with not having a day off, constant abuse of mandatory overtime working 12-hour shifts - seven days a week, for weeks on end.

Wages were stagnant for a decade as the company chose small lump sum bonuses instead of raises for most job classifications.

The acceptance of taking a one-time bonus versus a percentage raise is a tremendous loss of money compounded throughout the years.

This was a risky Strike - due to (the State of) Kansas being a Right-To-Work State, and with about 550 of 850 of the Workers being Union.

While some production was still going on due to Non-Union Workers crossing the line, it wasn't enough (in) profits (for the company, which was) getting affected as other PepsiCo products were also being boycotted at this time.

After 20 days they were able to come to an agreement for better scheduling of shifts and actual percentage pay raises - across the board.

While they didn't get everything they’d asked for, (those Union Workers are now) gearing up for Round Two with their contract being up in September of 2022.

They wanted to eliminate premium pay, introduced Two Tier health benefits and even threatened to send production to their Mexico facility.

BCTGM Members across multiple states voted to Strike - and boy did they ever.

Honestly, our International was a bit slow on the Frito Lay Strike, but kicked it in the high gear.

After a five-week Strike, (BCTGM) Members were able to fight off the company’s demand and get a fair contract.

While this came at a cost for both sides - more so for the company, consumers started noticing corporate greed and truly started boycotting all Mondelez products.

But the Kellogg Strike - in my opinion, was a special Strike.

The road to switch from transitional to legacy was almost impossible.

Legacy Workers could of very easily passed any contract, but they didn't feel that was fair and they wanted to fight for their fellow Brothers and Sisters.

With all four Kellogg's U.S. Plants on Strike for 11 weeks and with negotiations constantly going on, an agreement was made - and while they didn't eliminate the Two Tier System, they definitely improved it.

Our last Strike was out in California Jon Donaire - a subsidiary of Rich Products.

They we're forcing (their Employees to work) long hours at just above minimum wage, while requiring mass production of ice cream cakes that are sold throughout the country.

Workers there were largely Latino Females and Single Parents (who were) struggling to support their families and spend quality time with their kids.

Past raises have been pennies on the dollar while the company tried to increase their health insurance costs while not increasing their pay.

These ladies were forced to walk.

After 113 days, a fair contract was negotiated and some will say right here in Buffalo, New York - we had a lot to do with that.

The WNYALF (Western New York AFL-CIO Area Labor Federation), the New York State AFL-CIO and many other local and state organizations - and Local 36G, were ready to protest at Rich Products’ headquarters.

The pressure was on, and Rich Products did the right thing.

I feel that companies view their wealth through the production of their product and forget that
Workers create that wealth.

We make this product that goes on the shelf and if you don't pay your Workers a fair wage you don't have a consumer for your products.

With many Unions striking within the last two years, it’s going to change the economic package that is offered at the negotiation table.

Union Members across the country are feeling reconnected to the movement.

With the help of Social Media and its 24/7 coverage, companies are taking notice that Workers are not willing to accept substandard contract offers.

Striking Workers may take a pay loss that they will never recover, but it’s a risk that is worth the reward.

But it’s a larger loss to the company with little to no production during a Strike and the public boycotting all products.