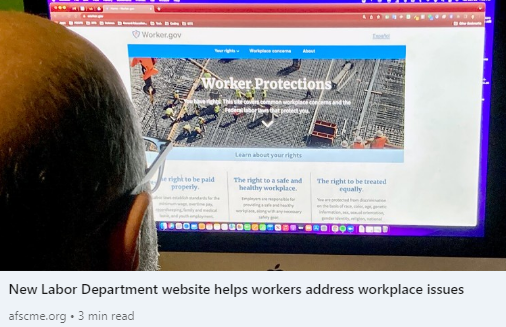 (WASHINGTON, D.C.) - The U.S. Department of Labor has launched a new website that aims to provide American Workers the information they need to address common workplace concerns.

The website is billed as a “Compliance Assistance Tool,” one that covers Workers’ Rights and Labor Laws, as well as various other work-related topics.

Common workplace concerns discussed on the website include: “I wasn’t paid the minimum wage,” “My employer blames me for getting injured on the job,” and “I was treated unfairly because of my disability.”

The website reminds visitors that Workers have the Federally-protected right to join together with their Co-Workers to form Unions.

Common workplace concerns under “Organizing Rights” include: “I was told I would be demoted if I supported the Union;” “Our boss threatened to fire us for complaining about wages and working conditions,” and “I want to form a Union at a Non-Union workplace.”

The new site has launched at a time when Workers across the country are increasingly making their voices heard, especially those who belong to strong Unions.

Members of strong Unions, such as the American Federation of State, County & Municipal Employees (AFSCME), are winning again and again.

And the Biden Administration has been one of the most Pro-Worker and Pro-Union in history.

When Amazon Workers in Bessemer, Alabama, began voting to form their own Union last Winter, President Joe Biden spoke up against their employer’s intimidation tactics, saying: “The choice to join a Union is up to the Workers - full stop.”

U.S. Labor Secretary Marty Walsh has also been a champion for Working People.

The former Boston Mayor is also a former Tradesman who joined the Laborers’ International Union of North America and led the Building and Construction Trades Council in Boston from 2011 to 2013.

But even before Biden was elected to office with strong support from Working Families and Labor Unions, Americans were already waking up to the Union Difference.

According to an annual Gallup Poll, Union popularity has been growing steadily for several years.

In 2021, more than two-thirds of respondents approved of Labor Unions, the highest since 1965.

According to the latest annual report from the Bureau of Labor Statistics (BLS) on U.S. Union Membership, Union Members in 2021 who were full-time wage and salary Workers had median usual weekly earnings that were 20% higher than their Non-Union counterparts.

But the Union Difference goes beyond higher pay and better benefits.

It’s also about respect for the work Union Members do, about being safe and protected on the job and about having someone to turn to when something’s not right.

Because Labor Unions and Union Members have a seat at the negotiating table, Union-represented Workers also are more likely to have the resources and training they need to do their jobs well - that’s why Congress must make it easier for Workers to form strong Unions.

It can help achieve this by passing the Public Service Freedom to Negotiate Act, which would establish a minimum set of standards of collective bargaining that all states must provide Public Service Workers, and the Protect the Right to Organize (PRO) Act, which would strengthen Federal Law to protect Workers trying to form a Union from attacks by their employers.

To Directly Access This Labor News Report, Go To: www.afscme.org/blog/new-labor-department-website-helps-workers-address-workplace-issues