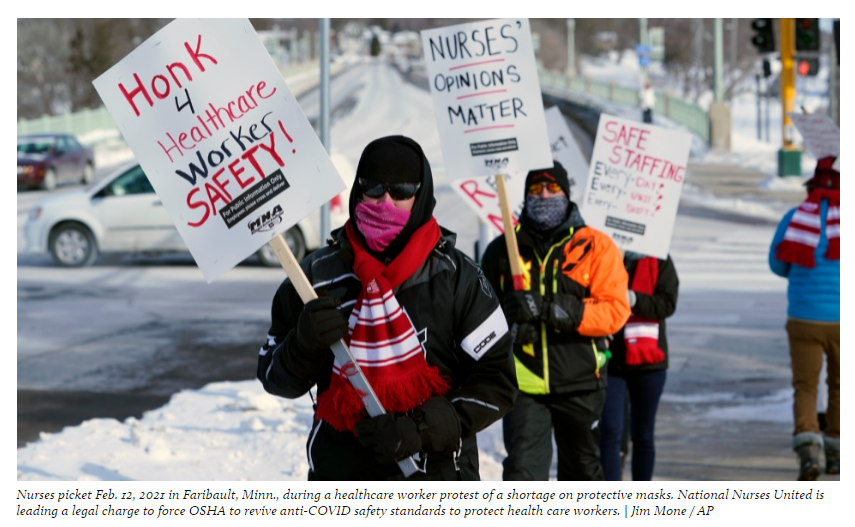 NNU’s offensive took two forms: One was a Zoom virtual press conference - a National Day of Action, and a candlelight vigil that was held in front of the White House on January 13th that highlighted that the danger of a lack of protection, plus burnout and bosses’ refusal to raise Nurses’ pay and improve working conditions, which have combined to drive Nurses out of the profession.

“As we enter year three of the deadliest pandemic in our lifetimes, Nurses are enraged to see that, for our government and our employers, it’s all about what’s good for business, not what’s good for public health,” said NNU President Zenei Triunfo-Cortez, who is a Registered Nurse (RN).

The other was NNU’s lawsuit, in the U.S. Court of Appeals for D.C., which handles most cases involving Federal Agency rules.

The appeals court is one level down from the Supreme Court.

Biden, Walsh and Parker planned to do what the Supreme Court banned them from doing: Issue that National Standard forcing all firms employing at least 100 people - not just hospitals and nursing homes- to protect Workers against the virus.

But corporate interests, led by the National Federation of Independent Business, a key cog in the Radical Right, and dozens of “Christian” firms, convinced the six GOP-named High Court Judges to toss that OSHA rule, letting companies nationwide off the hook.

And in oral arguments to the Justices, NFIB’s lawyer freely admitted that disruption of revenues and profits was a key reason to overturn the economy-wide rule.

After the Justices’ pro-corporate, Anti-Worker ruling, some firms still will implement Worker Protection Plans, but others, like Starbucks, said they will encourage Workers to protect themselves - but the firms won’t follow the now-dead OSHA mandate.

Starbucks’ January 19th announcement may be another arrow in the quiver for supporters of Unionization at the chain’s coffee shops.

Health care, after all, is a mandatory subject of bargaining during contract talks, after the Union wins representation rights.

Starbucks’ announcement also points up the need for OSHA’s National Mandate and Emergency Temporary Standard covering all firms with at least 100 Workers, which the GOP-named Justices tossed.

To Continue Reading This Labor News Story, Go To: www.peoplesworld.org/article/unions-demand-osha-restore-anti-covid-standard-protecting-health-workers/