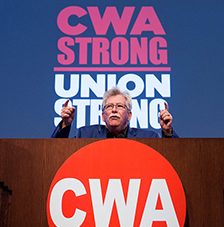 The TIWG was established by the Infrastructure Investment and Jobs Act to develop recommendations to address the workforce needs of the Telecommunications Industry as part of the Act’s historic investments in broadband.

Shelton was elected President of CWA in 2015.  He started his Union career in 1968 when he began work at New York Telephone as an Outside Technician.

Workers at Tower Safety recently won voluntary recognition from management and joined the CWA, becoming the first group of Workers to form a Union in the Wireless Tower Industry.

“By honoring the wishes of Tower Safety’s employees to join together in a Union, Kathy Gill showed her respect for the dignity and safety of workers in the industry,” Shelton said. “I am looking forward to serving alongside her as we address the best ways to ensure that Telecom Workers have the wages, benefits and safety protections that they deserve.”

Workers at Consolidated Telecommunications are represented by the CWA.

To Directly Access This Labor News Report, Go To: https://cwa-union.org/news/releases/cwa-president-chris-shelton-named-telecommunications-interagency-working-group?link_id=29&can_id=d28a0e75022b91d73fc95bc86b686390&source=email-one-day-longer-dish-workers-win-contract-after-10-years-of-bargaining-2&email_referrer=email_1416591&email_subject=cwa-president-chris-shelton-named-to-telecommunications-interagency-working-group-and-other-news