The National AFL-CIO Calls on General Motors & Mexican Labor Authorities To Hold A âFairâ Union Election For The 7,000 Workers Employed At The Silao Facility 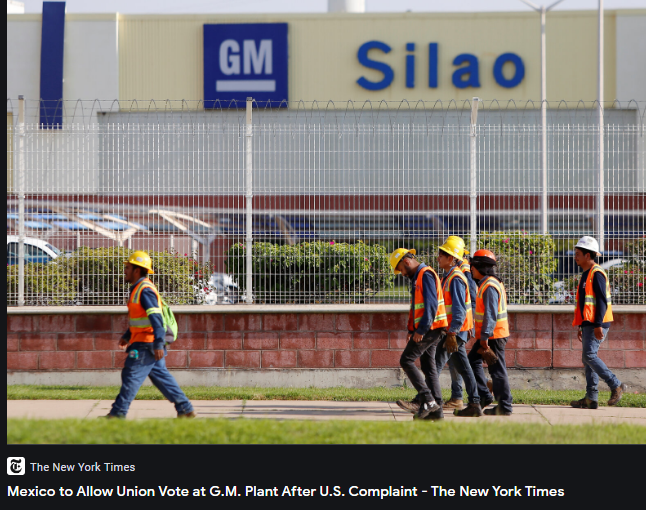 (WASHINGTON, D.C.) – The National AFL-CIO has released a statement, calling on General Motors and Mexican Labor Authorities to hold a “fair” Union Election at the Silao Facility:

On February 1st and 2nd, more than 7,000 Workers at the General Motors (GM) Silao Facility in the Mexican State of Guanajuato, will cast their vote to elect a new Union to represent them.

This election takes place after a Confederation of Mexican Workers (CTM) Union contract, considered a “protection contract” by many observers, was thrown out in August in a legitimation vote required by the Mexican Labor Law reform.

In April, the first attempt at a legitimation vote was annulled because of serious irregularities that resulted in a complaint under the Labor Chapter of the United States-Mexico-Canada Agreement (USMCA).

While we welcome the opportunity afforded by the Mexican Labor Law reform for
Workers to choose their Union, we are concerned by the lack of protection for Workers’ Rights inside the GM plant, especially after the irregularities in the April vote, and reports of continued harassment and violence targeting independent Union Activists.

The National AFL-CIO calls on GM and the Mexican Labor Authority to guarantee the conditions for a fair and open Union Election before, during and after the vote, as prescribed by the USMCA and the Mexican labor reform.

We call on the Mexican Labor Authority to act immediately to clarify publicly the rules on activities prior to the election, during voting, in the vote-counting process and in determining the final outcome.

For example, it is unclear what methods are being used to verify Worker support to qualify a Union to be on the ballot in this election.

We also call on the Labor Authority and GM to ensure unhindered access for Workers to vote in their Union Election.

Every effort must be made to ensure that no Worker is excluded from exercising their right to cast a vote.

All Workers from all work shifts and areas of the factory should be granted enough paid time to cast their votes.

Secretariat for Labor and Social Welfare (STPS) Labor Inspectors, Representatives of each Union and independent observers should monitor the casting of ballots at every voting location to ensure there are no irregularities in the election process.

We call on the Mexican Government and the Labor Authority to expand the participation of independent observers to include International Labor Practitioners in addition to the International Labor Organization (ILO) and National Institute of Elections (INE), and to publish the protocol for the registration of national and international observers.

To Directly Access This Statement From The National AFL-CIO, Go To: https://aflcio.org/press/releases/afl-cio-calls-gm-and-mexican-labor-authorities-fair-silao-facility-election