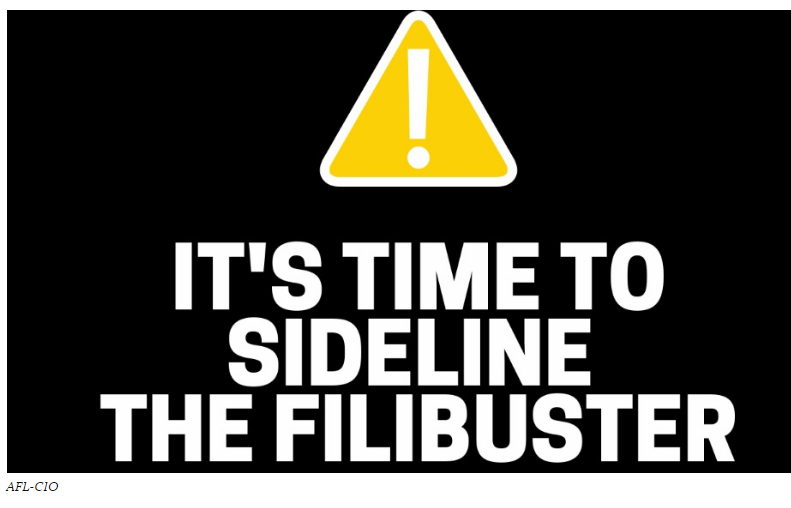 People’s World Editor’s Note: Lifelong Kentuckian Berry Craig is an Emeritus Professor of History at West Kentucky Community and Technical College in Paducah and a Freelance Writer. He is a member of American Federation of Teachers (AFT) Local 1360, Recording Secretary for the Western Kentucky AFL-CIO Area Council, Webmaster-Editor for the Kentucky State AFL-CIO, and a Member of the State AFL-CIO Executive Board.

“The Labor-hater and Labor-baiter is virtually always a twin-headed creature spewing anti-Negro epithets from one mouth and Anti-Labor propaganda from the other mouth,” Dr. Martin Luther King, Jr., aptly observed in remarks at the 1961 National AFL-CIO Convention.

Anyway, it’s no coincidence Senate Minority Leader Mitch McConnell is clinging like grim death to the filibuster to derail the Protecting the Right to Organize Act (PRO) Act and to stall legislation that would override GOP-sponsored State Laws that deliberately make it harder for People of Color to vote and vest control over vote counting and election certifying to partisan bodies such as appointed election commissions.

“The heirs of Jim Crow are weakening the foundations of our democracy,” Senate Majority Leader Chuck Schumer tweeted recently.

He was talking about people like McConnell, who got an F on the latest NAACP Civil Rights Federal Legislative Report Card.

The architects of the Racist Southern Jim Crow System were Conservative Southern Democrats.

Because everybody is supposed to be equal in a Union, they feared Unions would undermine white supremacy.

Hence, they never missed a chance to race-bait and Labor-bait.

Today, the political positions have shifted, and it’s Republicans who are upholding and seeking to expand the racist and Anti-Union offensive.

McConnell is all in for those neo-Jim Crow Voter Laws.

He demonizes the PRO Act and anything else that gives Unions a fair shake.

The Bill would “empower Workers to exercise our freedom to organize and negotiate for better wages and working conditions,” explains the National AFL-CIO. “It will remove archaic barriers to organizing, increase Worker protections and strengthen the institutions that hold corporations accountable.  It will repeal the ‘Right-To-Work’ (for less) Laws that lead to lower wages, fewer benefits and more dangerous workplaces.”

The National AFL-CIO supports the John R. Lewis Voting Rights Advancement Act of 2021 and the Freedom to Vote Act - measures that “would protect the right of every American to cast our vote and have that vote counted,” says National AFL-CIO President Liz Shuler.

Shuler adds: “There is nothing more fundamental in a democracy than the right to vote.  It’s how we make our voices heard.”

She calls the Lewis Voting Rights Advancement Act and the Freedom to Vote Act “a desperately needed Federal response to the attacks on voting rights happening in state legislatures all across the country.”

To Continue Reading This Labor News Report, Go To: www.peoplesworld.org/article/with-workers-and-voting-rights-in-the-balance-labor-campaigns-against-filibuster/