A âNewâ Labor Battle Opens On Broadway As Omicron Closes Shows, A Decision That Has Theater Unions âAlarmedâ 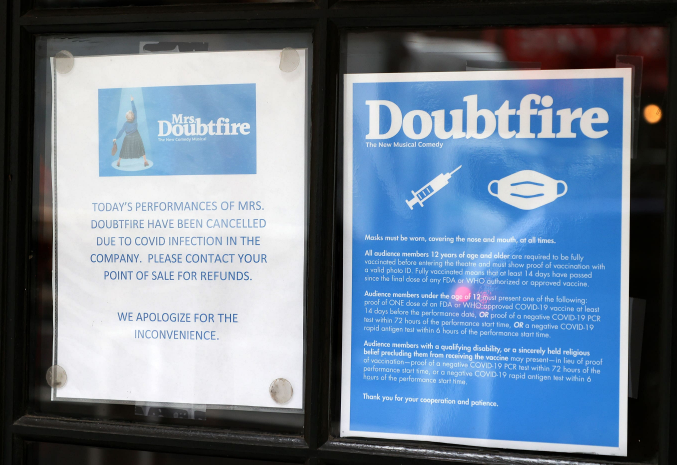 (NEW YORK CITY) - After over a year of industry-wide closures, Broadway theaters finally reopened in September, but 2021 did not end the way Theater Professionals hoped it would.

The late 2021 comeback had largely bucked London’s touch-and-go reopening earlier that Summer and only a handful of Broadway productions temporarily closed due to Delta infections.

But Omicron outbreaks late in the year stalled live theater.

Five shows closed permanently in December, citing extreme uncertainty ahead this Winter and increased challenges from the pandemic.

If some shows can’t go on under these conditions, how Broadway producers are choosing to close is creating a new labor controversy involving Artists already among the hardest-hit by the pandemic.

Kevin McCollum, a prominent producer of numerous Broadway shows - including the Tony Award-winning productions of “In the Heights,” “Avenue Q,” and “Rent,” remains “very bullish on the theatre business,” but he just made a decision that has Theater Unions alarmed.

With no cast album (unlike the wildly popular show “Six”), he says opening the show as cases spiked was “like planting a sapling, but there’s a hurricane.”

Doubtfire was open for seven days before an Omicron outbreak in the cast forced McCollum to cancel a matinee performance on December 12th.

Due to infections, the show did not reopen until December 22nd.

During the 11-show shutdown in December, McCollum says the production swung $3 million: $1.5 million in expenses and another $1.5 million in ticket sales refunded to customers.

But the larger issue was the shutdown’s impact on advance ticket sales, coupled with negative to lukewarm reviews.

Prior to the shutdown, the show sold around $175,000 in ticket sales per day, a relatively decent figure compared to gross weekly ticket sales during the same period in 2019.

“When a show cancels a performance due to COVID, we see an increased cancellation rate for all performances,” McCollum said.

The Broadway League suspended their publication of gross-ticket sales during the pandemic, making it impossible to verify box office performance.

The decrease in box office sales and increase in ticket cancellations was particularly concerning to McCollum as the Holiday Season was the most profitable, bolstering Broadway productions through the slower Winter months.

Family-oriented musicals, such as “Mrs. Doubtfire,” in particular benefit from the busy season.

“Especially for a family show, there are younger people who are not vaccinated, and with a family of four, none of them can come in because they’re not going to let their child wait outside,” McCollum said.

To Continue Reading This Labor News Story, Go To: https://globalcirculate.com/a-new-labor-battle-opens-on-broadway-as-omicron-closes-shows/