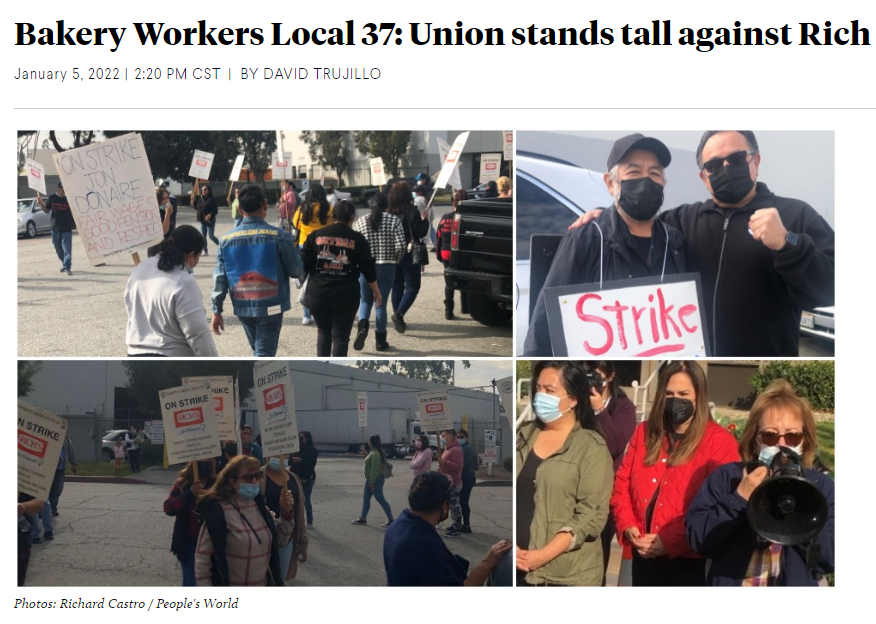 The Rich Products factory operates under the brand name of Jon Donaire Desserts/Rich Products Corporation and is well known for its wide variety of ice cream cakes.  Employees at the plant make cakes for Baskin Robbins, Safeway and Cold Stone Creamery.

BCTGM Local 37’s Membership, which is composed largely of women, mostly Latinas, have been walking the picket line 24 hours a day - demanding a fair wage increase, a reasonable workweek, proper staffing and a just contract.

Now, U.S. Senators Bernie Sanders (Independent-Vermont) and Alex Padilla (Democrat-California), along with some of their colleagues, have sent a letter in support of the striking Workers to Bob Rich, Jr., the Chairman and owner of Rich Products Corporation, which is headquartered in Buffalo, New York. 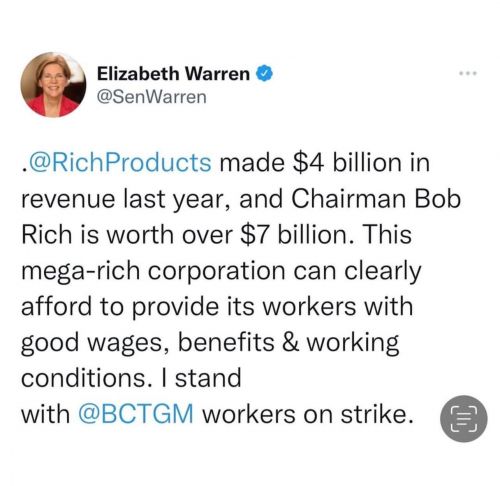 Donaire Dessert management’s anti-Union action is closely being watched and monitored by the Rich Products Corporation, a privately-held multinational food products corporation with revenues in 2020 at $4 billion.

In a release from Senator Sander's Office, Sanders says about 75% of the Workers are Latina Women who are forced into mandatory overtime with little to no notice and sometimes work up to 16 hours a day.

The Senators are asking Rich to bargain in good faith with BCTGM Local 37 and come to an agreement on a fair contract.

The Senators wrote to Rich: “Rich Products is not a poor company.  It is not going broke.  Last year, your company made over $4 billion in revenue.  During the pandemic, you became over $2 billion richer and now have an estimated net worth of more than $7.5 billion, according to the Bloomberg Billionaires Index.  We do not believe that it is too much to ask that you treat your Workers with the respect and dignity they have earned and deserve.  Mr. Rich: Your Employees have worked tirelessly throughout the pandemic, keeping production lines moving at breakneck speeds and fueling company profits.  We urge you to bargain in good faith with the Union and agree to a fair contract as soon as possible.”

Jon Donaire Pastries management has refused to bargain in good faith with Local 37, the Union that represents its Membership charges.

And because it is a Union Local composed of mostly Women, not much media attention has been given to this Strike taking place on the outskirts of Los Angeles in a such a small urban community.

The Santa Fe Springs population is close to 40% Latino.

Factory Employees there are taken for granted, Union Leadership says, and management hardly believed the Union Membership would stand up and voice their concerns.

That was management’s big mistake, Union Officials say, because it has miscalculated the talent, desire, commitment and organizing skills of its Membership to seek improvement of their working conditions.

To Continue Reading This Labor News Report, Go To: www.peoplesworld.org/article/bakery-workers-local-37-union-stands-tall-against-rich/

And For More, Go To: www.wgrz.com/article/news/local/us-senators-including-bernie-sanders-send-letter-to-bob-rich-jr-in-support-of-striking-bakery-workers/71-f16ccc4a-365a-4a62-84c8-ea974675a6c6