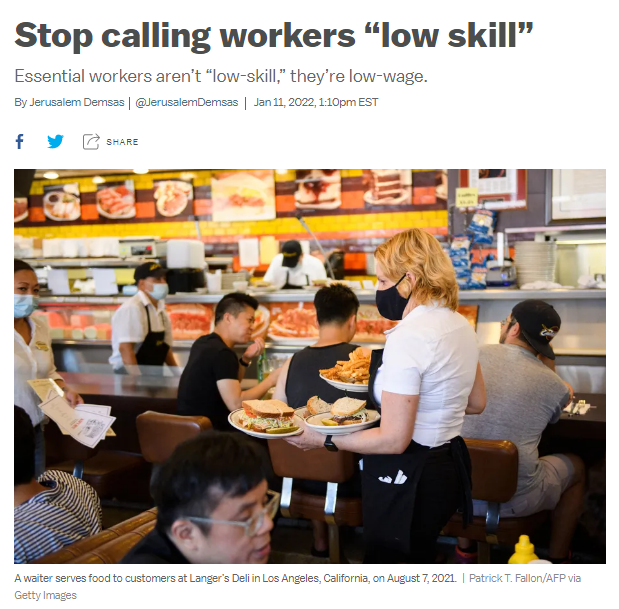 “My low-skill Workers, my Cooks, my Dishwashers, my Messengers, my Shoe-Shine People, those who work at Dunkin’ Donuts - they don’t have the academic skills to sit in a corner office,” New York City’s new Mayor Eric Adams said at a press conference, stirring up controversy less than a week into office.

The remarks were part of a broader plea to employers urging them to bring remote Workers back to the office and arguing that work from home was harming small businesses across the city, but in doing so, he referred to in-person, Service Sector Workers as “low-skill Workers.”

Those remarks rankled some, including U.S. Representative Alexandria Ocasio-Cortez, New York State Senator Jessica Ramos, and a number of other commentators who reacted negatively to the pejorative connotation of “low-skill.”

The on-line response to Adams’s comments centered around whether it was accurate to refer to people working in service sector jobs as “low skill,” pointing out the difficult nature of the jobs Adams listed.

Critics also noted that for the past two years, these Workers have been called “Essential” by everyone, from the Centers for Disease Control (CDC) and Prevention to major corporations in their commercials.

It’s common in economics to refer to labor that does not require extensive specialized training or certification as “unskilled.”

But used outside of the academic field, it’s a term that obscures much more than it reveals.

By implying low-skilled workers inherently don’t have the academic chops to do the higher-paid, remote, work-from-home jobs, Adams succumbs to a common error: Believing that skill (not supply and demand for particular types of labor) is what differentiates higher-paid Office Workers from in-person Service Laborers.

When people refer to low-skill Workers, the more precise term would be low-wage.

There’s nothing inherently unskilled about standing in a hot kitchen for hours cooking or picking countless pieces of fruit every day in the blistering heat.

This isn’t a pedantic distinction.

The failure to understand that skill does not track with wages often leads people to advocate for bad policies that don’t actually help low-wage Workers access a more financially stable future.

The first way we know that wages don’t directly track with “skills” is that many college-educated Americans are working those low-wage jobs.

According to the New York Federal Reserve, roughly 40% of recent college graduates are underemployed or “working in jobs that typically do not require a college degree.”

To Continue Reading This Labor News Report, Go To: www.vox.com/22871812/eric-adams-aoc-low-skill-workers