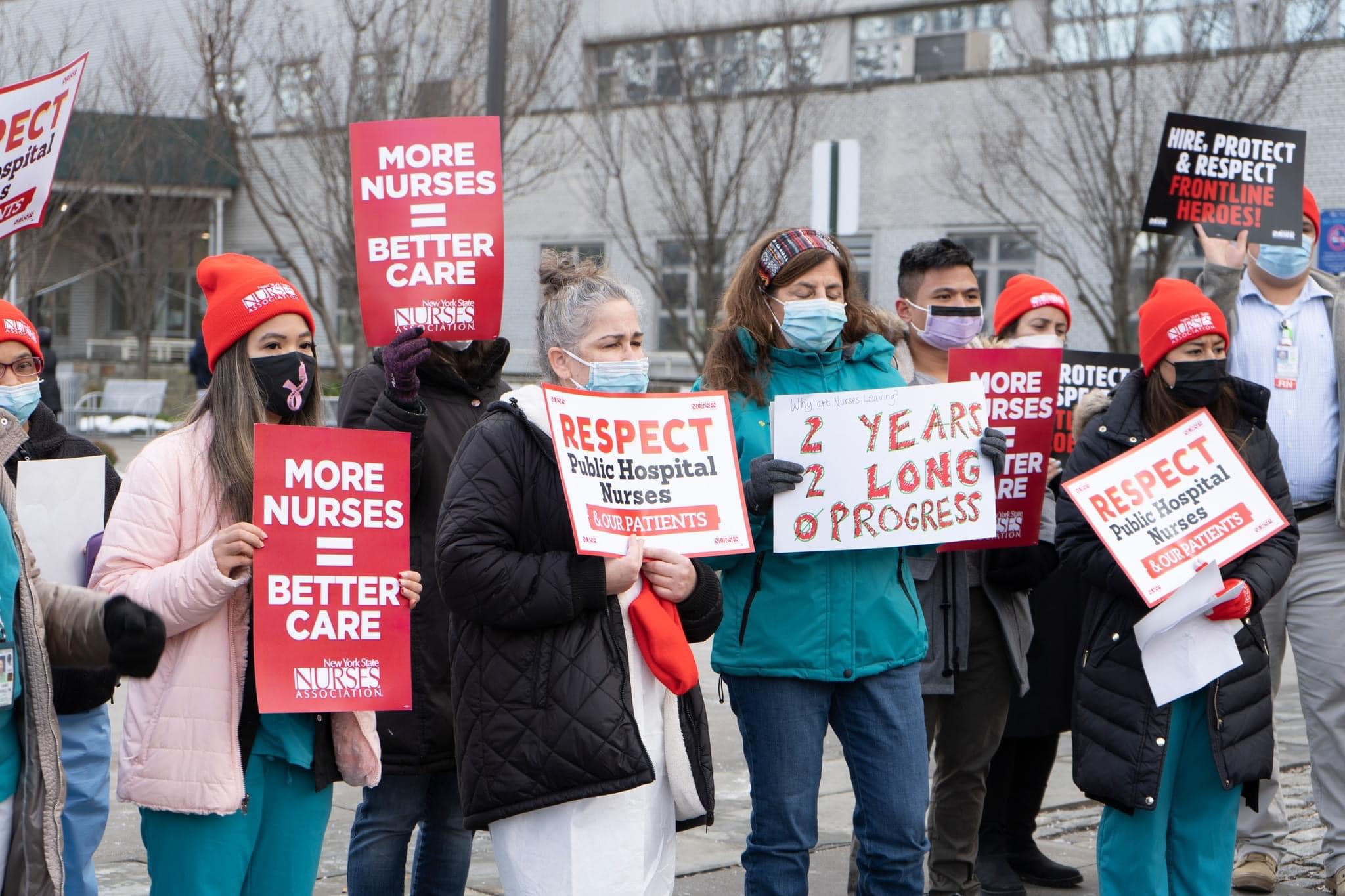 (NEW YORK CITY) - New York City’s Health Care System is on the verge of collapse, Nurses warned during a rally held outside Jacobi Hospital in the Bronx last seek.

After “decades of underfunding,” it’s buckling under the surge of infections from the Omicron Variant of COVID-19, said Kelley Cabrera, an Emergency Room Nurse who’s President of the New York State Nurses Association’s (NYSNA) Bargaining Unit at Jacobi.

At one point earlier last week, she told the rally, there were 40 patients admitted who were waiting for rooms, lying on beds in the halls by the Emergency Room.

“Our Health Care System was never designed for this,” she said.

The hospital is seeing a record number of patients and they’re sicker than usual, she told the rally.

At any time, she might be trying to medicate eight patients, while one man is screaming that he can’t breathe, a woman wants to be cleaned up - and then someone with a gunshot wound comes in.

“Having ‘two of me still wouldn’t be enough,’” she said. “I am tired of feeling like a ‘bad’ Nurse, when in reality its ‘bad’ working conditions.”

The agency “had eighteen months to hire enough Nurses to meet those ratios,” he continued.

But six months after the deadline, “there still isn’t any improvement.”

At Queens Hospital, where he works, his average over the last six months has ranged from seven to 12 patients.

How does he manage to take care of them all?

“I wish I had a good answer,” he responds. “You’re stuck doing the best you can with what you’ve got.  It’s not enough.”

Three-fourths of the patients at Queens have COVID, he told the rally.

And with the highly-contagious Omicron, “Staff are getting sick as much as patients.”

NYSNA Executive Director Pat Kane said the number of Workers in the City’s Health and hospital system testing positive for COVID shot from 154 in November to almost 3,000 in December.

“Even when Omicron subsides, the system will be hanging on by a thread,” Jacobi Pediatric Emergency Room Nurse Sean Petty told LaborPress.

“We haven’t even begun to grapple with the impact of long COVID,” she added.

To Continue Reading This Labor News Report, Go To: www.laborpress.org/nurses-warn-nys-health-system-on-verge-of-collapse-call-for-single-payer-now/