Via The Dunkirk Observer: Doug Stock, âA Giantâ In The Chautauqua County Labor Movement, âEnds His Long Runâ As President Of The Dunkirk AFL-CIO Central Labor Council - A Position Heâs Held Since January 2006 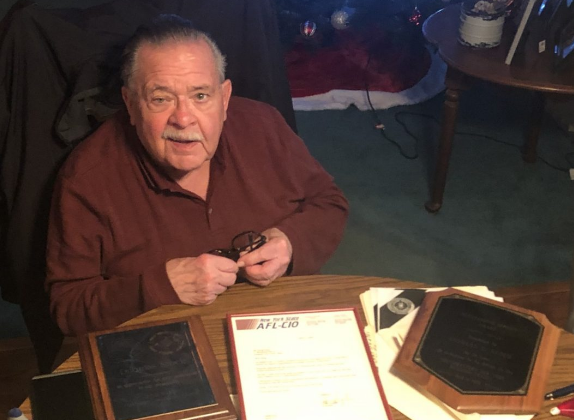 (DUNKIRK, NEW YORK) - Commendations, honors and plaques surrounded Doug Stock (Pictured Above/Dunkirk Observer Photo) as he sat in the kitchen area of his Fredonia home, though his attention soon drifted to a document he received more than five decades ago that would serve as the beginning of a new journey and mission.

“It’s my letter of termination,” he said opening the envelope, “when I left the school system down there.  (January 30th, 1967)… it’s where I started my Union work.”

Stock was born and raised in Staten Island, served in the U.S. Navy and later became employed as an Assistant Custodian at one of the smaller schools in the Borough.

Though he enjoyed what he was doing, he tired of the hustle and bustle that came with living in The Big Apple.

A connection through his late wife’s dad, however, would eventually bring Stock to Chautauqua County that year.

His father-in-law would hunt in this region with George Shepard, who was the Business Manager of Local 593 of the International Brotherhood of Electrical Workers (IBEW).

As candidates here backed out of an Apprenticeship Program, Stock was downstate when he received Shepard’s call asking him if he was still interested in coming to Dunkirk.

He never gave it a second thought and made his way West.

Fifty-four years after that decision, he is a Giant in the local Labor Community.

What started as an Electrician Apprenticeship with Fredonia Electric on the Fine Arts building at the State University of New York at Fredonia became an even greater calling.

After becoming a member of IBEW Local 106 in Jamestown in 1971, he worked and held numerous leadership positions in several Labor Organizations.

Most recently, he served as President of the Dunkirk AFL-CIO Central Labor Council.

Around this past Christmas Holiday break, however, Stock finally had a chance to begin to catch his breath.

After decades of meetings, travels and working with community business and elected leaders, he decided to take a step back and ended his long term as President of the Dunkirk Labor Council, a position he had held since January 2006.

As a Journeyman Electrician, Stock worked on various industrial and commercial projects throughout Western New York.

From 1985 to 1999, he became Business Manager of the IBEW Jamestown Local and oversaw five funds - including health and pensions - that totaled more than $14.9 million.

He also negotiated and handled a number of labor disputes and grievances for a Membership of 200 individuals in the Public and Private Sectors.

“He was the guy you would call (in a labor conflict),” said Attorney Charles DeAngelo of Fessenden Laumer & DeAngelo. “Everybody trusts him.”

During those 14 years, Stock worked with county and economic development officials on major projects in the North County that included the Dunkirk hotel, which is now the Clarion, expansion of Brooks Memorial Hospital and a number of schools.

In 1999, he became Regional Coordinator for Workforce Development with the AFL-CIO and was responsible for setting up rapid response workshops in Union facilities and providing assistance during a number of manufacturing layoffs in Western New York.

Over a seven-year period in the position, he said he worked with 1,000 laid-off Workers - annually.

“Doug is a Private Sector guy,” DeAngelo said. “He understood those companies need to make money for the Workers (to benefit).  He’s one of the key Labor people in this county.”

To Continue Reading This Labor News Story, Go To: www.observertoday.com/news/page-one/2022/01/love-for-labor-drives-union-leaders-career/