In A Letter To The U.S. Senate, AFSCME President Lee Saunders âWarns Of The Crisis Facing Our Democracyâ As States âMove To Curb The Rightâ To Vote: âWith Democracy At Stake, Congress Must Pass Voting Rights Legislationâ 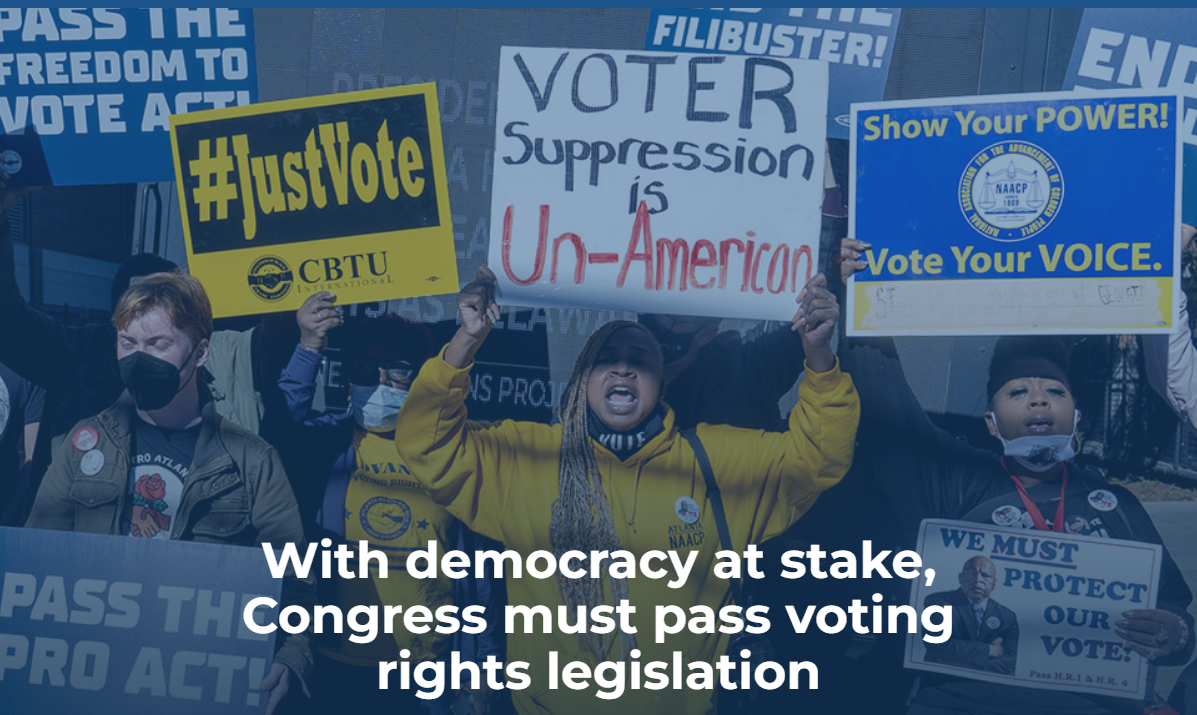 (WASHINGTON, D.C.) - In a letter to the U.S. Senate, American Federation of State, City and Municipal Employees (AFSCME) President Lee Saunders warned of the crisis facing our Democracy as states move to curb the right to vote - and urged Congress to pass legislation to protect voting rights and change Senate rules if necessary to aid in that effort.

In emphasizing the dire need to pass the House amendment to the Senate’s version of H.R. 5746, the Freedom to Vote: John R. Lewis Act, Saunders wrote: “Our Democracy is at stake.  Congress must take strong and principled action to pass this much needed voting rights legislation now.”

The measure would expand the ways people can vote while combating many of the tools used to suppress and limit voting.

It would also update rules originally laid out in the 1965 Voting Rights Act (later gutted by the 2013 Supreme Court decision in Shelby County v. Holder) that required states with a history of racial discrimination to ensure new voting laws are not discriminatory.

At a time when our Democracy is already fragile, many states have curbed access to the ballot box in an effort to suppress the votes of People of Color, voters with disabilities, young people and members of other historically underrepresented groups.

“At least nineteen states have enacted thirty four laws that will make it harder for Americans to vote,” Saunders noted in the letter, referring to a Brennan Center for Justice study. “This unprecedented attack on voting rights comes on the heels of record voter turnout in the midst of a pandemic.”

Last week, President Joe Biden called for a change to Senate filibuster rules that could be used to block the passage of the measure.

Following Biden’s speech, Saunders said in a statement: “It's time for the Senate to answer President Biden's call, stop hiding behind arcane rules and finally protect the right of every American to make their voice heard at the ballot box.”

With the observance of the Reverend Martin Luther King Jr.’s birthday and in the wake of the one-year anniversary of the attack on the Capitol, Saunders wrote: “The way to honor Dr. King is to act now to pass the Freedom to Vote: John R. Lewis Act so that every vote counts.  There can be no true celebration of his life without the passage of this needed legislation.”

To Directly Access This Labor News Story, Go To: www.afscme.org/blog/with-democracy-at-stake-congress-must-pass-voting-rights-legislation