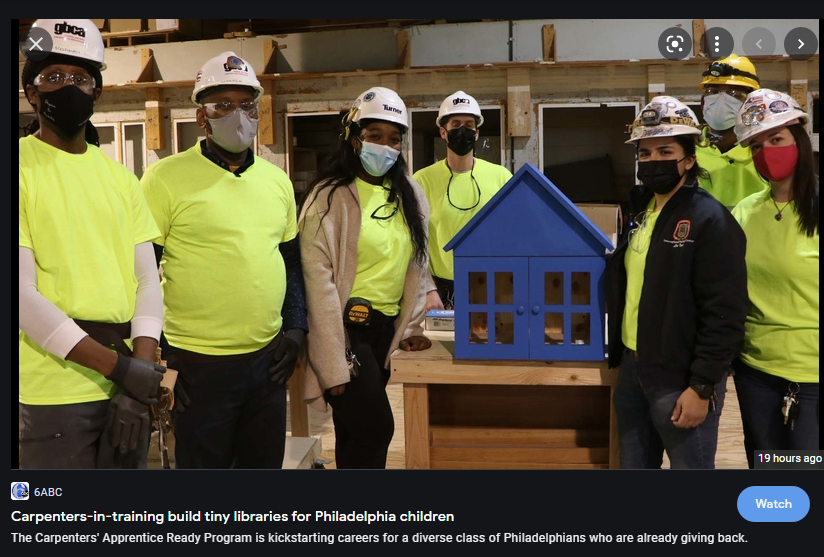 (PHILADELPHIA, PENNSYLVANIA) - "For me being a young woman, I just think it was unheard of.  But somewhere along the way, I was going to find my way in and be working in construction." Layla Bibi said.

For the last 16 years, the West Philadelphia native has been doing what no one in her family has done.

She currently serves as a Council Representative for the Eastern Atlantic States Regional Council of Carpenters.

There, she’s happy to see a diverse class of trainees getting the head start she never had.

"Nothing like this was available, which is why the CARP Program means so much to me," said Bibi. "Giving people the chance to come here and learn as they go is a wonderful opportunity."

That's the work of the Carpenters' Apprentice Ready Program, or CARP for short.

Started in 2016, the training regimen gives Philadelphians with no experience and no ties to the Carpenters' Union a chance to start a career.

With Martin Luther King Jr. Day here, students were given a special assignment on their day of service.

"We’re building mobile library drop boxes for rec centers and parks throughout the city," said Robert Landy, Director of Training with the Carpenters Joint Apprenticeship Committee. "And this library will get a kid a book that they maybe wouldn't have had."

The project is a collaboration between the General Building Contractors Association and members of CARP.

They will soon host a book drive and later plant each library in its designated location this Spring.

Among the builders was 40-year-old Drake Warren, who elected to follow in his brother's footsteps when changing careers: "At the other job I was at, there wasn't too much career advancement.  With (the) Carpenters, your rate is constantly going up and there's a lot of work."

As a Pre-Apprentice, Warren enjoys working at the Wells Fargo Center laying down the basketball court for the NBA’s Philadelphia 76ers.

He has high hopes for the future.

"This course right here is twelve weeks and then hopefully, I pass the test and I start my Apprenticeship," he said. "You go from Apprentice to Journeyman, and so forth, so on, and then some come back as Teachers."

To learn more about the program and receive updates about the next application period, visit their website.

To Directly Access This Apprenticeship And Training Labor News Story, Go To: https://6abc.com/carpenters-apprentice-ready-program/11472936/