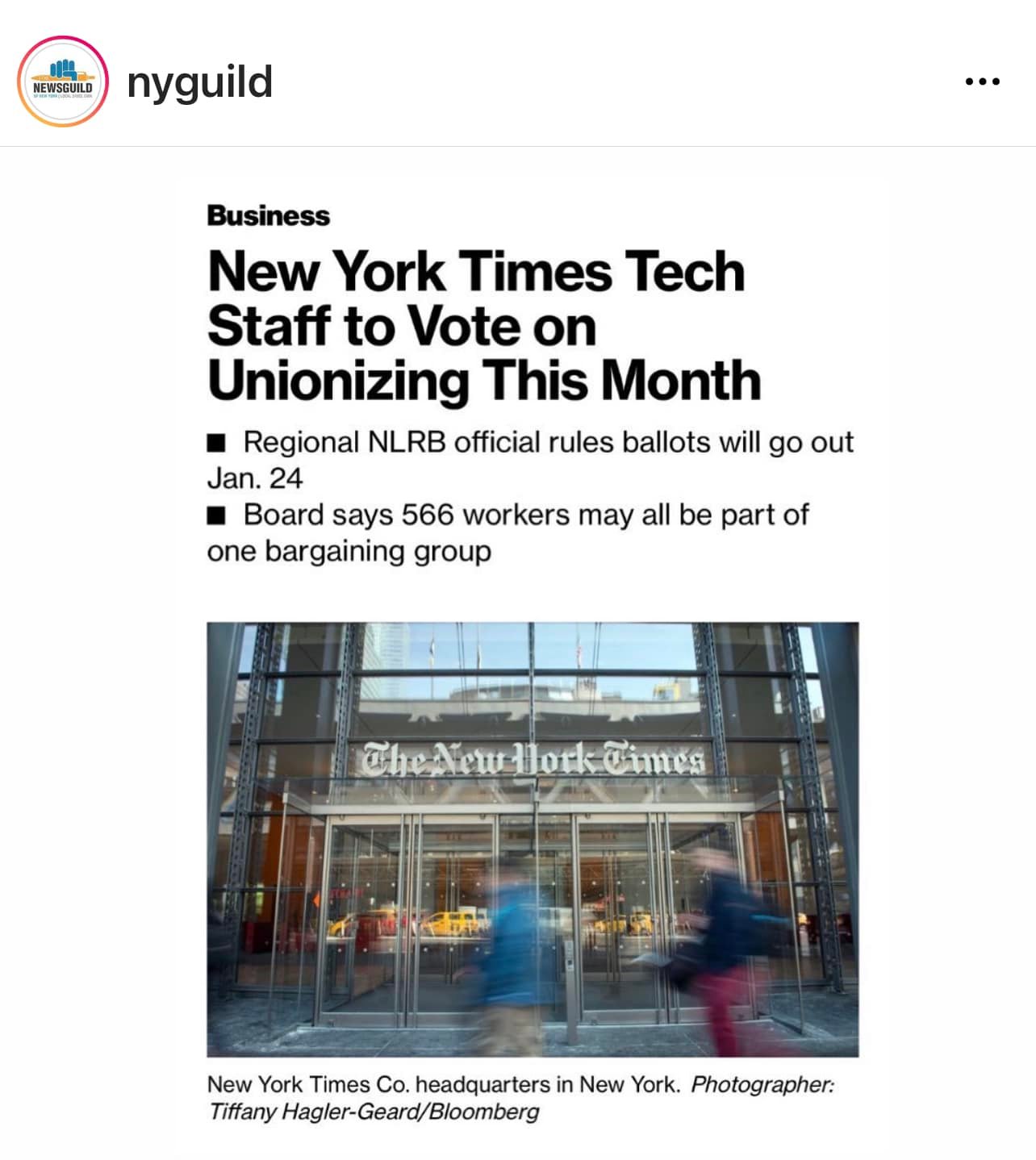 (NEW YORK CITY) - In a long-awaited decision, the National Labor Relations Board (NLRB) has ruled New York Times Tech Workers can hold a vote on Unionization starting later this month as one united Bargaining Unit.

It marks a major victory for Tech Workers at The Times, who first announced the formation of their Union in April and have met resistance from The Times at every step, including an attempt in August to divide the group into separate job-specific units and disenfranchise dozens of voters.

The NLRB decisively rejected Times management’s efforts to exclude Workers and backed the Tech Guild’s definition of which Workers would be eligible to vote, including Software Engineers, Data Analysts, Project Managers, Product Managers and Designers.

Ballots for the election will be mailed to Workers beginning on January 24th and will be counted between February 28th and March 7th.

Once certified, the Times Tech Guild would be the largest Union for Tech Workers with bargaining rights in the country.

The unit is represented by The NewsGuild of New York.

“We are thrilled that the NLRB found that we are one Union and are proud to be setting a precedent for our fellow Tech Workers across the industry,” said Nozlee Samadzadeh, a Senior Software Engineer at The Times and a Member of the Times Tech Guild Organizing Committee. “Despite management’s attempts to divide us, this decision proves what we’ve known all along - that we are stronger together and will win this election.”

In April 2021, Tech Workers at The Times first announced the formation of their Union, the Times Tech Guild, calling for pay equity, a more diverse workforce, more affordable health care, just cause protections, and more support to grow in their careers.

Times management has refused Workers’ requests for voluntary recognition, engaged in illegal tactics by forbidding Union Members from showing support for their Union and refused to let Workers vote for the Union through an expedited on-line election, even though 70% of Members in the Union signed a letter pledging to vote yes and calling for an expedited on-line vote.

Last August, Tech Workers at The Times led a half-day walkout in protest of the company’s efforts to hinder a fair election on a Union.

In late December, in response to an Unfair Labor Practice (ULP) Charge filed by the NewsGuild, the NLRB found that The Times had broken the law by telling certain Employees that they couldn’t show public support for the Union.

The Times refused to settle the charge and the NLRB will now be prosecuting The Times for violating Federal Labor Law at a hearing to begin in March.

“For months Times management has been needlessly attempting to Union bust.  And for months, our Members have been fighting back as one Union and standing strong as one Union,” said Susan DeCarava, President of the NewsGuild of New York. “The Board’s ruling affirms that they have every right to vote as one Union.”

To Directly Access This Labor News Story, Go To: https://newsguild.org/ny-times-tech-guild-wins-at-nlrb-over-management-attempt-to-disenfranchise-workers/?link_id=8&can_id=d28a0e75022b91d73fc95bc86b686390&source=email-union-matters-january-7-2022&email_referrer=email_1404572&email_subject=union-matters-january-14-2022