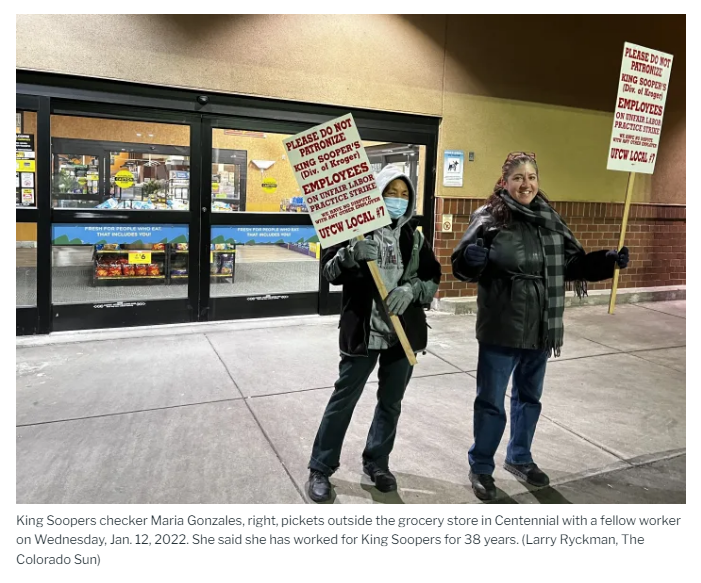 (DENVER, COLORADO) - No way, no how is Mark Simmons going to cross the King Soopers picket lines as Union Employees walked off the job to protest Unfair Labor Practices and seek better wages and work conditions.

The Denver resident, a long-time customer who remembers shopping there with his mother and younger brothers after moving to Colorado in 1962, said he made up his mind when he first heard Workers were unhappy with how their contract negotiations were going.

“My wife and I decided to immediately stop shopping at King Soopers,” Simmons said. “We didn’t wait for the Strike.  I figured the sooner there is outcry and a boycott the more likely Kroger might do the right thing.  (Instead) we shopped at Safeway for the first time.”

There are 77 stores from Boulder to Parker participating in the Strike, with Workers at another 10 in Colorado Springs expected to join at a later date.

Not all King Soopers stores in Colorado are Unionized.

Others not participating in the strike likely have existing union contracts.

The new offer would reportedly invest $170 million over three years in wages and bonuses, boosting hourly pay for a full-time checker with five years of experience by $1.50 more this year to $21.01 an hour.

In a statement, UFCW Local 7 Kim Cordova didn’t mince words in expressing what she thought about the latest proposal: “The company’s ‘last, best, and final’ offer, in many ways, is worse than its previous offers.  King Soopers, despite providing certain information has failed to respond to critical requests and data concerning the wage, health and safety matters that are central to these negotiations.  We Strike because it has become clear this is the only way to get what is fair, just and equitable for the Grocery Workers who have risked their lives every day just by showing up to work during the pandemic.”

The new contract has been about more than just a higher wage.

Hazard pay offered in the first few months of the pandemic is long gone even as COVID cases are up and Workers are still getting sick.

The UFCW is demanding better health benefits that fit these new work conditions because the job has changed.

To Continue Reading This Labor News Report, Go To: https://coloradosun.com/2022/01/11/king-soopers-union-workers-strike-business-profits/