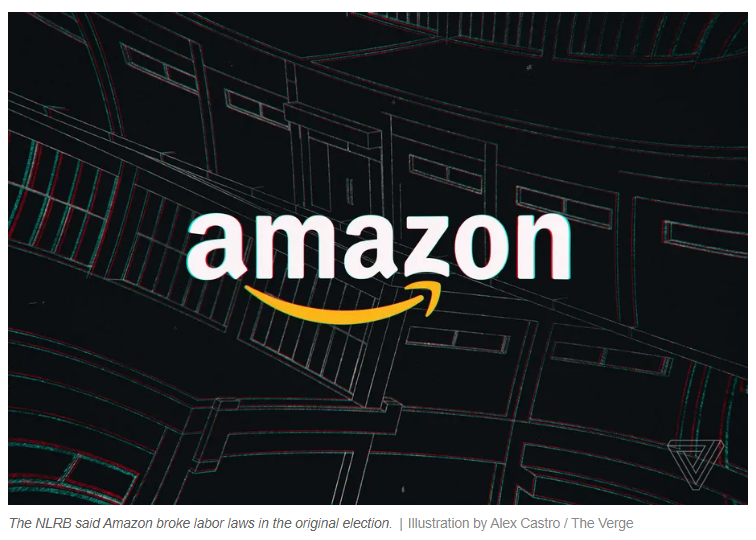 (BESSEMER, ALABAMA) - The second Union Election at an Amazon warehouse in Bessemer, Alabama will begin on February 4th, according to a notice posted this week by the National Labor Relations Board (NLRB).

The election is a redo of the one that was carried out in 2021, the results of which were declared invalid by the NLRB after reports Amazon had broken Labor Laws during the Union Drive.

The election will be carried out almost a year after Workers originally voted on whether to Unionize Amazon’s BHM1 facility.

The Retail, Wholesale, and Department Store Union (RWDSU) lost that election nearly 2-to-1, but disputed the results, taking issue with a mailbox Employees feared Amazon had access to.

The mailbox was installed by the United States Postal Service (USPS), at Amazon’s request, and at one point had a “privacy tent” put up around it, which the NLRB says Employees believed was monitored with video.

The NLRB cites the mailbox in its notice of the second election, saying that the results of the first are being set aside after the regulator “found the Employer interfered with the Employees’ exercise of a free and reasoned choice by creating the appearance of irregularity in the election.”

The redo will be carried out through the mail and supervised by the NLRB.

In response to the notice, the RWDSU put out a statement saying that it’s “deeply concerned that the decision fails to adequately prevent Amazon from continuing its objectionable behavior in a new election.”

The RWDSU says it “proposed to the NLRB a number of remedies that could have made the process fairer to Workers, which were not taken up in the Notice of Election issued today,” and promises to “continue to hold (Amazon) accountable for (its) actions.”

The RWDSU’s specific request was detailed in the NLRB Regional Director’s order for a second election, which was released thanks to a Freedom of Information Act (FOIA) request.

According to the document, the RWDSU asked the second election be held at an off-site location where Employees couldn’t be surveilled, and the NLRB would have more control.

Conversely, Amazon asked for an on-site election and said it would provide “a large, climate-controlled tent in the parking lot” where its Employees could vote.

The RWDSU said its desired location could be made COVID-19 compliant and Amazon cited lower infection rates of COVID-19 (the order is dated November 30th, 2021, pre-dating the spikes we’ve seen in recent weeks).

However, the pandemic plays a large part in the NLRB’s argument as to why the election will be carried out by mail.

The NLRB says that it will start counting the ballots on March 28th, though ballots will have to reach its offices by March 25th to be counted.

Due to a recent NLRB/Amazon settlement, Organizers may have more opportunities this time around - the company has agreed to stop barring Employees from being at their workplace more than 15 minutes before or after their shifts if they’re carrying out Union activity and has promised to prominently post statements of Workers’ rights in its facilities and Employee Apps.

To Directly Access This Labor News Story, Go To: www.theverge.com/2022/1/11/22878457/amazon-bessemer-alabama-union-election-redo-february-fourth