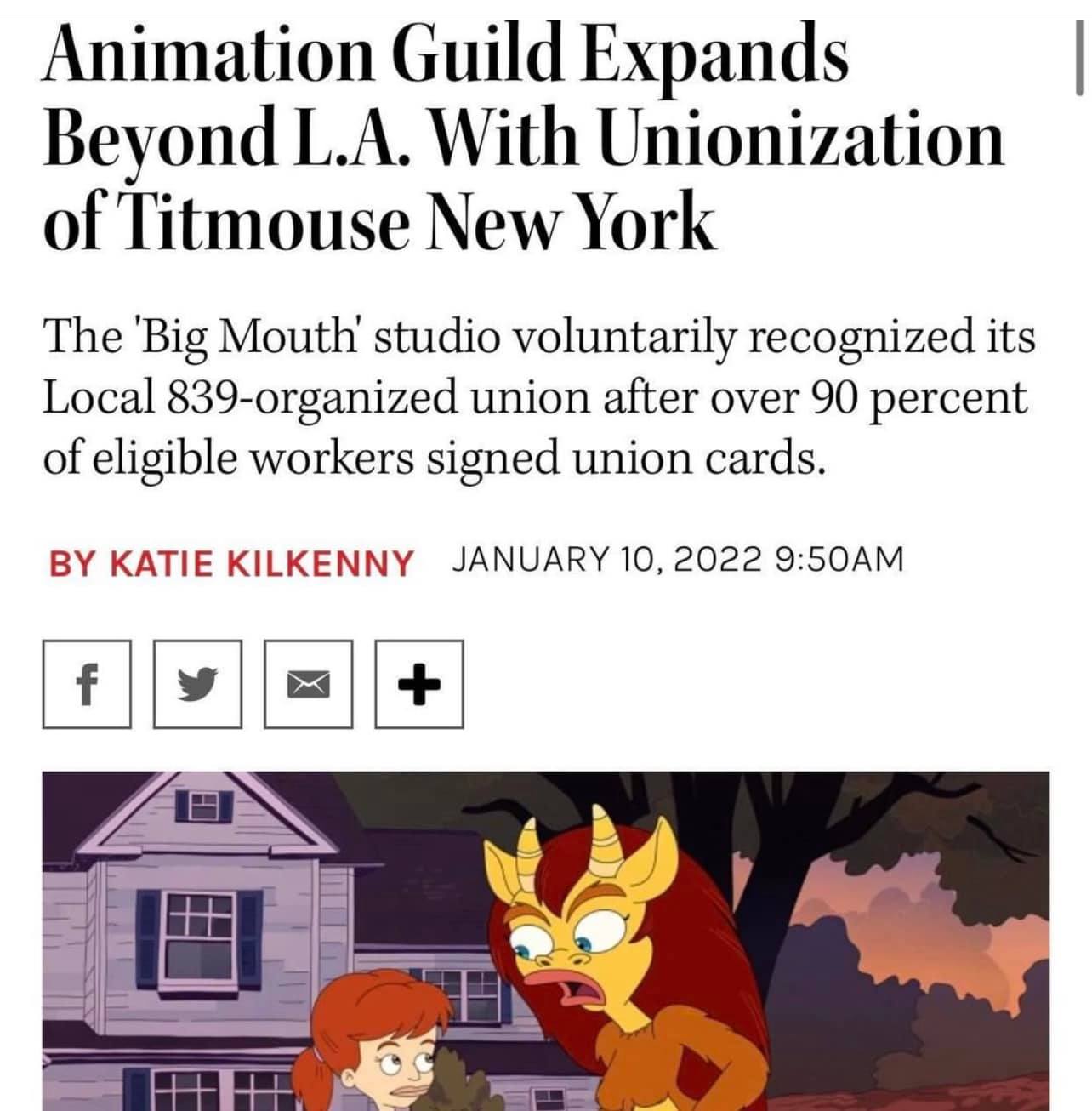 (NEW YORK CITY) - In a first since the signing of its charter in 1952, the Animation Guild has Unionized a company outside of Los Angeles County.

On Monday (January 10th), The International Alliance of Theatrical Stage Employees (IATSE) Local 839 announced a majority of Animation Workers employed at the Harriet the Spy and Superjail! Studio Titmouse - who are based in New York City, signed Union Cards to be represented by the Guild, and that Titmouse management voluntarily recognized the Union.

The Bargaining Unit of 113 workers covers roles such as 3-D Modelers, Directors, Storyboard Artists and Prop Designers, among others.

More than 90% of eligible Titmouse Workers signed the representation cards and the Union says Titmouse’s recognition of the group was certified by an arbitrator on January 7th.

In a statement, Titmouse Founder and President Chris Prynoski said: “We are proud of the Titmouse Artists in NY and support them as we move into the future together!  Responsible employment practices are the foundation of our Artist-driven studios.  Following our voluntary recognition of the Unit, we look forward to the opportunity to work with IATSE as we explore the first agreement for our NY-based employees.”

The news comes over a year after Animation Workers at Titmouse Vancouver voted to Unionize with The Animation Guild’s Canadian counterpart, IATSE Local 938, becoming what IATSE said was the first animation studio in Canada to have Union Representation.

“This historic moment is a cause for celebration as we begin a nationwide effort to ensure all Animation Workers are treated with respect and are afforded the same benefits and protections as those who are working in Southern California,” The Animation Guild’s Business Representative, Steve Kaplan, said in a statement.

The Guild adds Animation Artists in New York haven’t had Union Representation in over 30 years after The Motion Picture Screen Cartoonists (IATSE Local 841) merged with International Photographers of the Motion Picture Industry Local 644, which became part of Local 600, in 1988.

In a statement, Titmouse Story Artist Chrissy Fellmeth said: “I’m overjoyed that my students and young peers will be able to thrive in an environment that supports them from today forward.  To my fellow New Yorkers in animation and production, I’m confident that our collective pain is being recognized now that we have a seat at the table.”

The Animation Guild is still negotiating its new Master Agreement with the Alliance of Motion Picture and Television Producers (AMPTP), which has prompted Animation Writers to launch a loud campaign for pay parity with their live-action and Writers Guild of America-represented peers.

Talks are set to pick up again on February 14th.

To Directly Access This Labor News Report, Go To: www.hollywoodreporter.com/business/business-news/animation-guild-unionizes-titmouse-new-york-expands-1235072285/