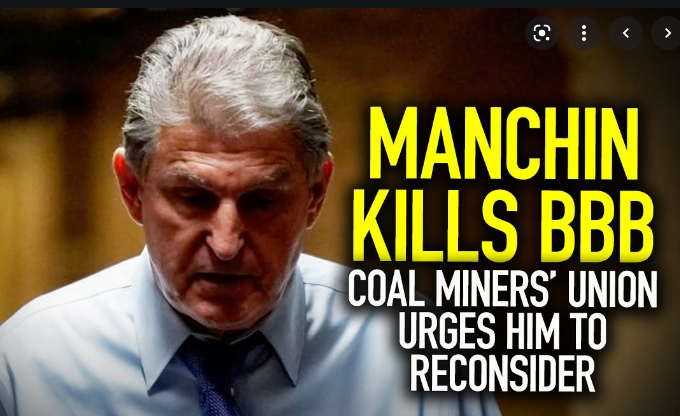 When one hears the words and the music of the iconic Labor song, “Which Side Are You On?” - the historic and epic struggles of West Virginia Coal Miners against their bosses come to mind.

U.S. Senator Joe Manchin has fashioned himself as a supporter of those Miners whose jobs are disappearing along with the coal industry itself.

Now, however, those Miners in his home state are parting ways with the Senator over his stubborn opposition to and sabotaging of President Joe Biden’s Build Back Better agenda.

It’s a significant development considering how Manchin has bent himself over backward to do everything he could do in recent years to boost Miner pensions, health care and black lung disease mitigation programs.

It is significant then that the United Mine Workers of America (UMWA), the very day Manchin declared himself a “no” on Biden’s Build Back Better plan, came out with its statement demanding the passage of Build Back Better.

They were backed, of course, by the National AFL-CIO, the large Labor Federation to which they belong.

While the news coverage of the battle over Build Back Better has emphasized the struggle between Moderates and Progressives in the Democratic Party and the pressure Progressives are putting on Manchin, the campaign mounted now by the Miners may, in the end, be the thing that gets Manchin to move.

The Miners’ campaign is significant too because on the issue of saving coal jobs they have often been on the same side as the companies who employ them.

Now, however, as they break ranks on Build Back Better, they are also beginning to break ranks on questions about the future of the coal industry itself.

“We urge Senator Manchin to revisit his opposition to this legislation and work with his colleagues to pass something that will help keep Coal Miners working and have a meaningful impact on our Members, their families and our communities,” UMWA President Cecil Roberts said.

Supporters of Build Back Better hope that the coming out of the Miners in West Virginia for the legislation will have more of an impact on Manchin than some of the pressure from Progressives.

They face an uphill battle, however.

Manchin likes to portray himself as someone who came up in life with the Miners, facing struggles similar to theirs and as someone having a big heart that is always thinking about them.

The real story, of course, is that he has long been a pal of the coal bosses.

He and his family have become millionaires from the sale of waste coal from abandoned mines.

Manchin has sold this dangerous material to a polluting power plant in West Virginia and has received more campaign donations from the oil, coal, and gas industries than any other Senator.

The Miners are actually beginning to express interest in provisions of Build Back Better that would provide assistance to them during a transition to a clean energy economy.

They also like provisions of the Bill that penalize companies that try to sabotage Union Organizing and Collective Bargaining Rights, among other things.

More and more Miners are accepting the idea the coal industry is eventually going to be replaced and the West Virginia AFL-CIO has been urging them to support Build Back Better measures that it says will help protect them during the transition away from coal and to clean energy that will provide many good jobs in the state.

To Continue Reading This Labor News Story, Go To: www.peoplesworld.org/article/miners-press-manchin-to-choose-between-them-and-the-coal-bosses/