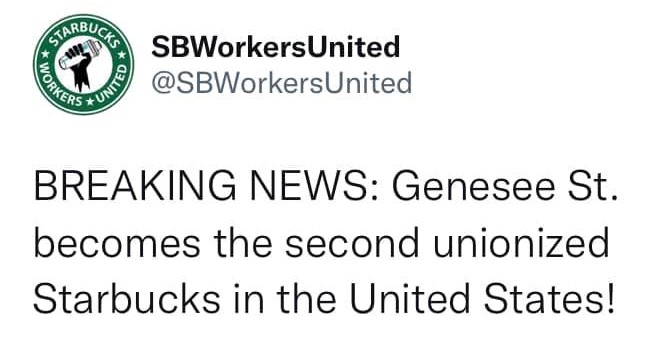 (BUFFALO, NEW YORK) - Starbucks Partners in Buffalo have won another major victory as the National Labor Relations Board (NLRB) has ruled the attempt by Starbucks to pack the voting list with Partners from another store has failed.   As a result, the NLRB has further ruled that Partners employed at the company’s Genesee Street store, located across from the Buffalo Niagara Greater International Airport, voted 15-to-9 in favor of forming a Union.

The ballots that were challenged at the vote count by the company on December 9th were cast by Partners who work at another store.  The Regional Office of the NLRB in Buffalo ruled those ballots were ineligible.

“While most of the world saw us win on (December 9th), today is a special day - today we put an end to Starbucks’ delay attempts and formed our Union at the Genesee Starbucks,” Lexi Rizzo, a Shift Supervisor at the Genesee Street location, said Monday (January 11th).

“Finally, the Partners feel we have a voice at our workplace - this is an emotional day for all Partners here who have fought so hard to make our voices heard in the work we do.  Now we’re asking the same thing Elmwood is asking - we want a fair contract and most importantly we demand that Starbucks stop their Union-Busting in Buffalo and across the Nation - immediately. No other Partners should have to endure what we went through to have a voice on the job,” Rizzo said.

Caroline Lerczak, who is also employed as a Shift Supervisor at Starbucks on Genesee Street, said: “Words cannot describe how we are feeling right now.  After months of Anti-Union meetings, intimidation tactics and intense pressure to vote 'no,’ we can finally say we won our Union.  I would love to see Starbucks show some accountability for their actions and come to the bargaining table to negotiate with us now.”

Starbucks Genesee Street Partners will now join with Starbucks Partners employed at the company’s Elmwood Avenue store in the City of Buffalo to become the first two Starbucks stores to bargain for a Collective Bargain Agreement in the United States.

Michelle Eisen, an 11-year Barista at the Elmwood Starbucks store, congratulated the Genesee Street Partners: “We are so excited to be joined in bargaining by another store and that stores in other cities like Boston, Arizona, Knoxville, Seattle and Chicago are also moving forward. Working together we’re going to make Starbucks a better place for Partners to work and customers to visit.  It’s time for Starbucks to end its Anti-Union Campaign and negotiate with us.”

The results of a third Buffalo area store that voted – on Camp Road in nearby Hamburg, are being challenged by the Union over the company’s conduct during the Organizing Campaign.

Three more stores in Buffalo are awaiting their election date from the NLRB.