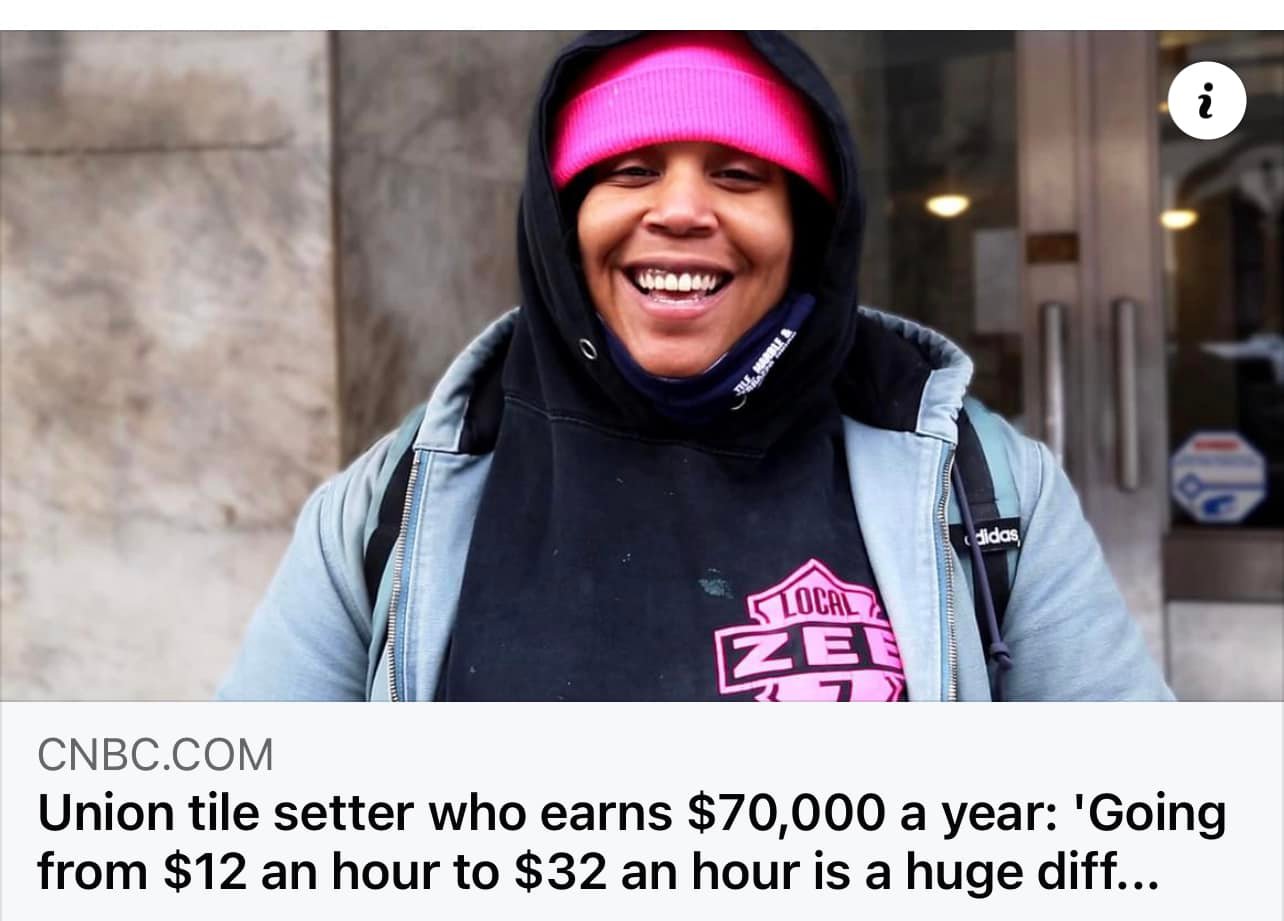 (NEW YORK CITY) - Zandra John is a 28-year-old Union Tile Setter from Flatbush, Brooklyn, but her Mother always wanted her to become a Teacher.

Three years into earning a bachelor’s degree in secondary education - with a minor in English, John was unable to re-enroll in her program because she was behind on her tuition payments.

While she loved working with kids and liked the idea of becoming an English or Special-Needs Teacher, her Teaching Assistant job did not have benefits and she relied on Medicaid and food stamps.

“I love kids so much, but I felt like something was missing.  I wasn’t really doing what I wanted to do,” says John. “And while I wanted to finish school, I knew ($12) an hour would not pay off my loans, it would not help me pay tuition, it really wouldn’t do much but help me get by.  So I just went on the internet.”

She googled high-paying roles and found herself looking at jobs in construction.

She quickly thought of her father: “My dad was a carpenter, he worked in the train stations.  And that’s really where I started falling in love with building stuff, fixing things around the house.  I would always help him.  I wanted to have a career in that field, but I wasn’t sure if I would be able to.  It’s a man-dominated field.  And usually, they don’t want women there.”

Now, John makes roughly $32 per hour as a Tile-Setting Apprentice.

John’s first step into construction was enrolling in a free seven-week training program with Nontraditional Employment for Women (NEW) - a New York City-based organization that prepares, trains and places Women in careers in skilled construction, Utility and Maintenance Trades.

“That was really the start of a whole nother journey for me.  I would TA in the daytime and I would leave there and go straight to NEW,” she remembers.

In June 2018, she graduated from the program and began an eight-week Pre-Apprenticeship Program in tile setting that lead to an official Apprenticeship.

She says she was drawn to the program because it combined her interest in construction with her artistic hobbies.

“One reason why I love tile is because tile and art, they have a connection.  A lot of times when we are putting up tiles it’s like a mural.  We do a lot of murals.  We did a flower mural.  We did a cloud mural.  We did a mural in LaGuardia,” she says. “I love art, so the fact that I can incorporate two things that I love is amazing to me.”

To Continue Reading This Apprenticeship And Training Labor News Story, Go To: www.cnbc.com/2021/03/01/what-it-takes-to-earn-70000-as-a-union-tile-setter-in-new-york.html